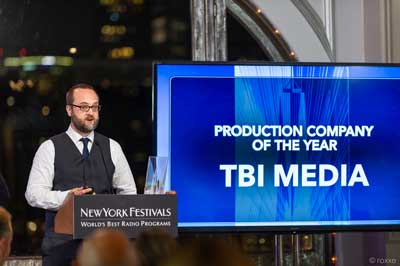 The 2018 Grand Jury honored RTÉ Ireland with the prestigious title of Broadcaster of Year and TBI Media UK with Production Company of the Year. The BBC, Canadian Broadcasting Corporation, Guardian Australia, and TBI Media each earned the distinguished New York Festivals Grand Award.

RTÉ Ireland was honored with the title Broadcaster of the Year for the fifth year. The network took home an impressive 8 Gold Trophies, 11 Silver, 2 Bronze and 15 Finalist Certificates.

Jim Jennings, Head of Content RTÉ, said: “I am delighted that RTÉ has been named New York Festivals’ Radio Broadcaster of the Year three times in the past four past years. The international competition is exceptional and those who have entered are all experts in their fields which makes this particular achievement a great honour for everyone in RTÉ. This is extremely important to us as a public service broadcaster. Across the board, from the acclaimed Documentary on One and Drama on One, to our Factual, Current Affairs, Arts, Music and Entertainment programs and Lyric fm, our production teams have demonstrated their capacity to compete and win against some of the largest and best of the world's broadcasters."

London’s TBI Media was recognized with the title of Production Company of the Year. “Born This Way” earned the Grand Award for both TBI Media and BBC Radio 2. The series chronicles the story of how gay people transformed pop culture over the past 50 years. TBI Media earned 2 additional Gold trophies, 1 Silver, 1 Bronze and 4 Finalist Certificates.

“The TBI team are thrilled with this year’s results in New York. 9 Finalists leading to a Grand Award, 2 Golds, 2 Silvers and a Bronze are great. To then be ‘Independent Producer Of The Year’ again is fantastic. This is fundamentally down to the inspired team I’m lucky enough to work with having world class ideas and being given the chance to broadcast them on great platforms. It’s clear that the opportunities for audio producers globally have changed dramatically, even since the last NYF awards, and it’s inspiring to see so many producers and platforms winning awards this year who are clearly thriving as a result.” –Phil Critchlow CEO / Founder - TBI Media

"What an honour and a joy to pick up this prestigious award which marks 50 years of Radio 1 playing a pivotal role in music, entertainment and popular culture,” said Ben Cooper, BBC Radio 1 Controller.

“Am I going to die in here?” Canadian Broadcasting Corporation’s Campus was in the spotlight earning the Grand Award (News & Documentary). The podcast chronicled the story of Syrian émigré Mohammad Al Masalma whose fight for freedom during the 2011 revolution led to his arrest and detainment by the Syrian regime. The entry also earned a Gold trophy and the UNDPI Silver Award.

“It's thrilling to see The Reckoning win both the Gold and Grand awards. The podcast dealt with child abuse in institutions and it can be easy to turn away from these stories, to think that it all happened in the past and it couldn't happen again. The most important thing we can do is ensure their stories are never forgotten and put pressure on governments, churches and other organisations to be held accountable,” said Miles Martignoni, Podcast Producer, Guardian Australia.

Gold-winning documentaries provided a distinctive view and voice including: “Bing Crosby in 'The Road to Rock 'n' Roll' - From Final Solution to Audio Revolution” Magnum Opus Broadcasting/ BBC Radio 2; “Vocal Chords in Conversation with Peggy Seeger” Athena Media; “A clash of identity in Germany” DW; and “A Day In The Sun” SiriusXM.

Dramas and Mini Series were in the winner’s circle. Gold trophy winners include: “The Hours” Corporation for Independent Media/BBC Radio 4; “The Tempest - Theatre as a Journey to the Core of Man.” An acoustic Performance” RBB; “Dan Dare: The Audio Adventures (Vol 2)” B7 Productions Ltd; “Blood on Satan's Claw” Bafflegab Productions; and “Tumanbay” Goldhawk Productions/BBC/Panoply.

News and Talk/Interview programs provided a diverse scope of information on issues from around the world. Gold winners include: “Bioneers: Revolution from the Heart of Nature Series 17 programs” Bioneers; “Dying Young” Radio Television Hong Kong; “The Kalb Report” National Press Club; and “Pain & Pride: Remembering Vietnam - 50 Years Later” Westwood One. Westwood One also earned the Silver trophy for “America in the Morning.”

For more information, go to www.newyorkfestivals.com.

July 01, 2002 6919
by Steve Cunningham For most of us, Sonic Foundry’s Sound Forge needs no introduction. In addition to being the company’s flagship audio product, Sound Forge has been one of the most popular stereo editors on the Wintel platform...
Read More...
© 1988 - 2023 Radio And Production, LLC
Go to Top