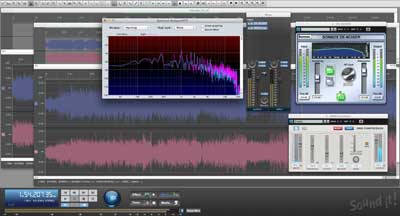 Recording is quick and easy, including support for up to 192 kHz, 24-bit PCM files. With a maximum file size of 4 GB for WAV and AIFF files (up to 20 GB in the company’s proprietary SIW/SIA format), you won’t run out of recording time. The software offers timed recording with selectable preroll, insert recording between markers, and overwrite recording. A media browser makes it easy to audition sound files and instantly add them to your song via drag-and-drop. A performance monitor lets you check your CPU load and hard disk access time, and a memory monitor verifies how many files are stored and how much memory you need.

A spectrum analyzer (FFT) displays the frequency spectrum at the current cursor point during recording and playback, including peak hold, linear or logarithmic graphing, and variable magnification. Batch processing enables you to apply such tasks as gain change, normalize, fade-in/out, and file format conversion, and more to all audio files in a specified folder. Although Sound it! 8 Basic is not a MIDI sequencer, it can import Format 0 and Format 1 Standard MIDI Files and render them as audio.

Sound it! 8 Basic is available immediately for Mac and Windows at an introductory U.S. price of $51.50 USD until February 4, 2018, and $69 USD thereafter. For more information and to order, please visit www.internetmusicsoft.com/sit.  INTERNET Co., Ltd., will exhibit Sound it! 8 Basic and Sound it! 8 Pro at the 2018 Winter NAMM show, booth 14024.

July 01, 2000 7927
By Steve Cunningham It’s the non-linear editing giant. It’s the eight-hundred-pound gorilla of digital audio. Yup, it’s Pro Tools from Digidesign, and until recently, it was expensive. A full-blown Pro Tools system was a...
Read More...
© 1988 - 2022 Radio And Production, LLC
Go to Top