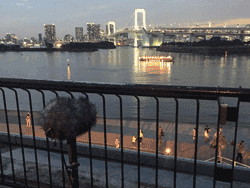 ► Pro Sound Effects® released its newest library, Tokyo Ambisonics. Featuring 3.5+ hours (22GB) of pristine city ambiences, Tokyo Ambisonics includes software that allows sound editors and mixers to position "virtual microphones" in any direction with various polar patterns for greater flexibility, realism, and creativity. This is the third Ambisonics library released by PSE. The software-controllable Tokyo Ambisonics sound effects library offers unmatched versatility in post production, as editors can tweak perspective of the urban atmospheres in real-time to specifically match the setting of a scene. The B-format files can also be decoded to mono, stereo, 5.1, 7.1 and beyond. "Ambisonics is the only choice when mixing for 360 video," says Masato Ushijima, recordist of Tokyo Ambisonics. "It's almost impossible to create 3D soundscapes that are both convincing and CPU-efficient with traditional DAW use. Whether you're working on a video or VR game, Ambisonic ambiences are going to be the foundation." Captured at diverse locations throughout the city, Tokyo Ambisonics was recorded in 24-bit/96kHz high-resolution using a SoundField SPS200 microphone. The library offers sounds unique to Tokyo, such as the Yamanote Line railway, as well as more general-purpose urban ambience recordings from the Shuto Expressway and Keihin Industrial Region. Features: 46 high-quality Ambisonic recordings with average recording length of 5 minutes (22GB): 24-bit/96kHz Broadcast Wave Files. Choose between download or flash drive delivery. SurroundZone2 software by TSL Products: Gives editor full control over "virtual microphone" position and polar patterns. Available in 32-bit and 64-bit AAX, VST, and AU. Free sampler available for download: 2 full ambiences + software (1.5GB). Now through November 30, 2016, take advantage of introductory pricing of $69 for a lifetime license. $99 reg. price after November 30. www.prosoundeffects.com.

► Advances in technology and the wide availability of affordable recording software and gear have made it possible for everyone to record and produce their own music, audiobooks, voiceovers, and any other audio projects. Achieving a professional sound, however, requires a firm grasp of the fundamentals of audio production and sound reproduction. The Blackbird Academy school of audio provides these fundamentals for every would be and existing recordist in a new online video series: The Blackbird Academy Foundation Series. The series is the first to be launched under Pensado's Strive, an innovative multi-format educational initiative developed by Penwick Media, creators of Pensado's Place, the weekly educational web series, and Hal Leonard, the publisher of books and digital content on the music business, audio technology, and related content. The series' instructional videos and tutorials were written and filmed using the gear and workflow at Blackbird Studio, a recording facility in Nashville where artists such as Taylor Swift, Martina McBride, Kings of Leon, John Mayer, Keith Urban, Kelly Clarkson, Bruce Springsteen, Snoop Dogg, and countless others have recorded. Each video in the series is an easy-to-digest tutorial led by Kevin Becka, Co-Director/Instructor at The Blackbird Academy. An experienced musician and recording engineer, Becka designed the course for anyone aspiring to learn about audio engineering and sound production, whether they are working in a home studio or aspire to work in a professional environment. The courses are designed for anyone wishing to record audio - musicians, composers, producers, songwriters, remixers, audiobook creators, voiceover artists, and singers who wish to gain more professional results when recording, overdubbing and mixing their production. The Blackbird Academy Foundation Series will teach operational skills and understanding of basic to advanced recording concepts including: Signal flow, critical listening, using a Digital Audio Workstation (DAW), console basics and operation, microphone choices and advanced placement, using plugins and analog processors, understanding digital conversion, developing skills such as mixing, editing, and processing, using shortcuts to build speed, and more. The first five courses of The Blackbird Academy Foundation Series' 17 titles are now available on www.Groove3.com.  ►

August 01, 2006 9694
by Steve Cunningham A few weeks ago I visited my buddy Patrick as he settled into his recently-refurbished digs at the studio where he works. Patrick is a composer who writes music mostly for television, where the timelines are...
Read More...
© 1988 - 2022 Radio And Production, LLC
Go to Top