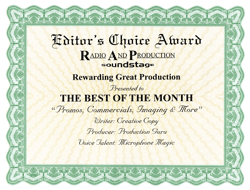 Eric Rubalcava, a VO artist in San Diego, picks up this month’s Editor’s Choice Award with his spot submitted for the November Q It Up question about favorite spots that never aired. Here’s Eric’s story behind the spot:

When I started my production company, I started out by listening to local commercials, notating the one's I thought could use some help. I would then deconstruct the spot to see if I could find a better way to present the key points or concept. One day, I heard a particularly bad spot for a local pest control company, and was immediately inspired. The ad was for Truly Nolan. I knew very little about the company, but as I listened to the spot, I remembered that they were the guys driving around with their vehicles embellished with giant mouse ears! In my mind, the ears on the car gave the company character! It seemed to me that a company with enough character to bolt giant mouse ears to their car, would want their commercial to reflect that character in some way... However, the commercial on air was hard sell, seemed to be voiced by an owner, and was dripping with local "flair". I sat down that afternoon, wrote the copy, created a character, and had a blast! After the spot was finished, I had planned to pitch it to the company, but got busy with other work, and never went through with the pitch. Sadly, Marvin the mouse never made his on-air debut, but would later join a symphony of other characters that came together to create a 1 minute Character VO demo.

August 01, 2007 9373
by Steve Cunningham I’m a fan of physical controllers for software audio editors. I like pressing a button to drop into record, and adjusting a fader or knob to tweak the audio. I still prefer a mouse for selecting a region to...
Read More...
© 1988 - 2022 Radio And Production, LLC
Go to Top