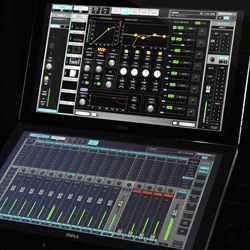 ► Waves Audio is now shipping the Waves eMotion LV1 mixer, a revolutionary live digital mixing console that provides real-time audio mixing for front-of-house, monitor and broadcast engineers. Based on Waves SoundGrid® technology, this software mixer delivers the superior sound quality for which Waves is renowned, as well as the convenience and speed needed in demanding live environments. eMotion LV1 gives live engineers unprecedented control over their sound. Each of the mixer’s channels has its own plugin rack capable of running up to eight Waves and third-party plugins. This means you can mix live with hundreds of instances of your favorite plugins, all running inside the mixer itself. All plugin presets and chains saved in eMotion LV1 can be shared with the Waves MultiRack and StudioRack plugin hosts, allowing engineers to move seamlessly between live and studio environments. The mixer’s channel strip — its standard EQ, filters and dynamics processing — is provided by Waves eMo plugins: eMo D5 Dynamics, eMo F2 Filter and eMo Q4 Equalizer. All eMo plugins are designed for maximum clarity and efficiency in a live environment. eMotion LV1 comes in three configurations: 64, 32 or 16 stereo/mono input channels. The mixer can be controlled by hardware control surfaces and multi-touch devices, ranging from four touchscreens to a single laptop or tablet. eMotion LV1 uses the SoundGrid infrastructure for audio networking. It can be configured as a portable or stationary setup, and can connect to any SoundGrid-compatible I/O or server. This means that live sound engineers can easily take their mixer with them and run it anytime, anywhere — at home, in a hotel room, on the tour bus, or at the live venue. This way they can have all the time they need to work on their sessions, whether offline or with full-on audio, and make sure they are 100% ready for the show. Other features include: run 8 SoundGrid-compatible plugins directly on each channel; up to 16 auxes, 8 audio groups (stereo/mono), L/R/C/Mono, 8 matrixes; 16 DCA faders, 8 mute groups, 8 user-assignable function controls; 32-bit floating point mix engine; up to 96 kHz sample rate; compatible with industry-standard control surfaces; Windows/Mac 64 bit-compatible. www.waves.com.

► Designed for musicians and performers who demand mobility without compromising audio quality, the PreSonus® HP2 stereo personal headphone amplifier is a great choice for driving wired in-ear monitors (IEMs), as well as headphones. Portable and compact, it offers two XLR line-level inputs and one stereo 1/8-inch headphone output with volume control. Operation can be switched between stereo and mono, and a Pan knob is provided. The HP2 can be powered with an external DC power supply or a nine-volt battery that lasts more than seven hours and includes an LED battery indicator. It mounts on a microphone stand or clips to the musician’s belt. PreSonus HP-series headphone amplifiers have long been popular for their loud, clean, clear sound and roadworthy built quality. The new HP2 delivers these qualities in an easily affordable, stereo device that will fully satisfy wired IEM and headphone users alike. The HP2 is available at PreSonus dealers with an expected U.S. street price of $109.95.

Also from PreSonus, the new Eris E44 and E66 two-way active MTM studio monitors deliver an expanded frequency range and the widest stereo field in their class, thanks to their nested Midwoofer-Tweeter-Midwoofer (MTM, also known as “D’Appolito”) design. The result is a more consistent listening experience on- and off-axis. The E44 and E66 nested MTM configuration incorporates dual Kevlar® low/mid drivers (4.5- and 6.5-inch, respectively) operating in parallel and covering the same frequency range so that they acoustically couple. This effectively creates a larger woofer to provide a more dynamic output than conventional two-way studio monitors. Nesting a 1.25-inch, silk-dome, high-frequency driver between the two woofers minimizes phase displacement to improved spatial resolution and a wide sweet spot. Like all Eris speakers, the E44 and E66 provide the tools and flexibility needed to suit any mixing environment. By bringing the midrange drivers close together and raising the HF driver, the E44 and E66 are able to perform optimally in both horizontal and vertical orientations. A three-position Acoustic Space switch helps compensate for the boundary bass boost that occurs when the monitor is placed near a wall or corner. High and Mid acoustic tuning controls further help to mitigate room problems. A Low Cutoff filter makes it easy to integrate a subwoofer. Individual balanced XLR and ¼” TRS and unbalanced RCA input connections make hookup quick and easy. Safety features include RF shielding, current-output limiting, over-temperature protection, and subsonic protection. Eris E44 and E66 studio monitor speakers have a street price of $249.95/speaker and $349.95/speaker, respectively. www.presonus.com. 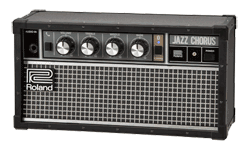 ► Roland announced the JC-01 Bluetooth® Audio Speaker, a unique new addition to its Jazz Chorus lineup. For the first time in the long-running series, the JC-01 steps outside the world of musical instrument amplification to provide ultra-clean stereo sound reproduction for smartphones, tablets and other Bluetooth wireless devices. With its cool “mini JC” appearance and portable design, the JC-01 is the perfect mobile companion for music lovers, guitar enthusiasts, and anyone who wants great sound on the go. Roland’s Jazz Chorus amp series is legendary in the guitar world as the benchmark in clean tone, and equally respected for reliable operation and lasting durability. True to the Jazz Chorus tradition, the JC-01 offers exceptionally clear and natural sound in a rugged design that will stand up to years of everyday mobile use. The integrated, rechargeable battery provides many hours of wireless operation for listening to music, podcasts and live audio streams played from mobile devices. Equipped with two custom speakers, the JC-01 produces a high-definition, stereo sound field with richness and transparency through the mid and high ranges. Thanks to the built-in passive radiator, the JC-01 delivers deep, powerful bass that belies the unit’s small size. A three-band EQ is also included, giving users a much finer range of tonal adjustment than available in typical Bluetooth speakers. The JC-01 includes some useful extra functions as well. Rather than a guitar input, the Audio In jack can be used to connect another audio device, enabling users to creatively mix wireless and wired sounds together. Also on board is a convenient speakerphone function that allows smartphone users to talk hands-free with a quick touch of a button. www.rolandus.com. 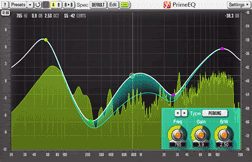 ► Voxengo announced the release of PrimeEQ, a parametric equalizer plug-in for professional music production applications. PrimeEQ implements an extremely optimized user interface. It features an innovative “differential” filter display which shows you how exactly a given selected filter contributes to the overall EQ shape. All control points are placed on the overall EQ shape making the workflow with this equalizer fast and efficient. PrimeEQ is similar to CurveEQ in this respect except that PrimeEQ uses independent parametric filters instead of a continuous EQ curve. PrimeEQ features a deeply customizable spectrum analyzer of the same high quality as found in SPAN, GlissEQ, and other Voxengo plug-ins. Features include: Up to 32 parametric filter bands, 13 filter types, narrow-band sweeping, stereo and multi-channel processing, 64-bit floating point processing, preset manager, undo/redo history, all sample rates support, and zero processing latency. PrimeEQ is available for on-line purchase for $49.95. Demo version of PrimeEQ can be downloaded freely at the Voxengo web site at www.voxengo.com. 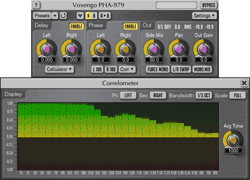 Also from Voxengo, the PHA-979 version 2.5 update is now available for download. Voxengo PHA-979 is a track phase and time alignment audio plugin, available in AudioUnit, VST and VST3 plug-in formats (including native 64-bit support), for Mac OS X (v10.6 and later), and Windows computers. PHA-979 version 2.5 includes the following changes: Implemented color scheme editor with load and save functions; added "Brown" and "White" color schemes; redesigned the infrastructure controls; and added 90%, 110% and 150% visual scales. PHA-979 is useful during mixing sessions, especially when working with the sound material recorded through an array of microphones. In many cases this allows you to solve various phasing problems arising from the microphone placement chosen during the tracking session. In other cases this process may help you to align drums and other instruments to each other bringing punch and time coherence not attainable by the ordinary time-aligning alone. www.voxengo.com. ►

April 01, 1993 13656
by Jerry Vigil This month's Test Drive features a box from a company you don't hear a lot about. Sound Performance Laboratory, or SPL, is based in Niederkruchten, Germany, and their Vitalizer Psychoacoustic Equalizer offers an...
Read More...
© 1988 - 2022 Radio And Production, LLC
Go to Top