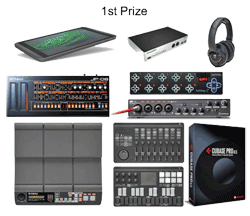 ► The MIDI Association, a global community of people who use MIDI to create music and art, has announced the first #DigMyRig contest. Sponsored in cooperation with media partner Broadjam, the contest is a celebration of more than 30 years of MIDI, and its impact on modern music. The contest brings together MIDI users of all backgrounds and levels of experience and expertise, offering an opportunity to share their stories and their setups, and a chance to win valuable prizes donated by TMA members including Roland, Yamaha, Gibson, iConnectivity, and many more. The first prize winner will take home a selection of MIDI gear worth over $3000, including a Roland JP-08 synthesizer, Yamaha DTX Multi 12 controller, Cubase Pro 8.5 workstation software, Steinberg UR44 interface, and much more. Second prize, worth more than $2000, includes a Yamaha Reface CS synth, Roland TR8 Rhythm Performer, Steinberg UR242 interface, and more. The third place winner will be awarded over $1000 in gear, including a Zivix Jamstick, Steinberg 22 Mk 2 interface, and Yamaha UD-BT01 MIDI Bluetooth interface.  All three winning bundles also include an NVidia Shield Tablet, Korg NanoKONTROLStudio and NanoKEYStudio, and a free Broadjam membership. To enter the #DigMyRig Contest, go to www.midi.org and register as a member of The MIDI Association (it's free to join).  The member portal page contains details on how to submit your photo and text showing off your MIDI gear to the contest.  Winners will be selected by peer-to-peer voting.  The contest will run through June 30th. www.midi.org. 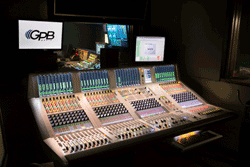 ► Georgia Public Broadcasting continued its longstanding investment in HARMAN Professional Solutions with the selection of two Studer Vista 9 consoles for its production audio control rooms. The station was experiencing system instability and looked to Studer for a resolution. Its previous audio system was a hybrid of two different manufacturers, which according to Darvin Sparks, senior broadcast engineer at GPB, contributed to the system instability. GPB also desired enhanced production capabilities in several areas, including improved total system I/O capabilities, a flexible internal routing architecture, both MADI and audio over internet protocol (AoIP) capabilities, and a minimum of 32 channel strips per console. For Tom Spencer, primary audio operator at GPB, the new Studer consoles have been a valuable addition to the GPB studios. “The two Vista 9 consoles consistently meet the station’s wide range of production demands,” he said. “Internal routing is extremely flexible and intuitive, allowing for any last minute modifications that should arise during the course of a production.” Spencer is also impressed with the functionality of Studer VistaMix automatic mixing, a software upgrade available to all Vista digital mixing consoles. “VistaMix is absolutely indispensable,” said Spencer. “The ease of post-VistaMix routing options are very helpful in meeting an array of studio monitoring demands.  Metering is easy to customize. The overall ergonomic design of the desk allows the operator to perform all necessary functions without compromising listening position or comfort. There has not been a production of any size that our Vista 9s could not handle.” Beginning as a five-station educational TV network in 1970, GPB is now a multiplatform media production facility with 18 radio stations and nine TV stations, serving approximately 98 percent of residents throughout Georgia and parts of Alabama, South Carolina, Florida and Tennessee. It has five TV production studios, four radio production studios and numerous video and audio editing suites. The station’s two TV production control rooms are mirror images of each other, and both contain Studer Vista 9 consoles. www.harman.com. ►

April 01, 2005 7861
by Steve Cunningham New software versions are funny things — sometimes they add significant features and coolness, and sometimes they don’t. When the upgrade to Sound Forge version 7 came along, I took a pass on it. There were...
Read More...
© 1988 - 2022 Radio And Production, LLC
Go to Top