In the face of it, spending Thanksgiving weekend in Dublin, Ireland was a little bit crazy, certainly non-traditional, but an absolute ton of fun. Yes, we missed the turkey and pumpkin pie as we dined on beans at breakfast and deep fried hake at dinner, but it was an incredibly rewarding trip on several levels, particularly professional. It was really refreshing to work with a group of on-air/production people who completely get it. To meet their managers who are happy to step out of the way and let their staff create the magic was energizing.

A few months ago, the “Breakfast Show”, as they call it, came up with a plan to do a “Naked Breakfast.” Ray Foley and JP told 98FM in Dublin that they wanted to do a show that was completely live; no pre-recorded commercials, promos or sweepers -- no recorded music for that matter -- and live news, weather and sports reporting. They arranged to have Ireland’s number one music act today, The Coronas, perform several songs live. Another “street” band called Keywest performed and provided incidental music for commercials, news and sports reporting plus, did LIVE jingles. They hired local actors to perform all the commercials with the input of the clients and agencies. They even had one fellow do “live” sound effects like opening a refreshing can of (whatever) or knocking on doors and such. The next question came my way, “Could you come to Dublin to do this show live as our VOG?” How could I say no?

The absolute BEST part of this entire exercise was the certainty that every word, note and ad lib had to be picture perfect, every time. Any mistakes made would be instantly broadcast. There was no rewind, no CONTROL-ALT-DELETE arrangement that would make up for a slip of the tongue or missed cue. It was completely raw and unedited. That’s a kind of pressure that very few of us have ever had to deal with in our careers, and it was actually quite invigorating. To be fair, I was actually a bit happy that it only lasted two hours. I was wrung out by the time we were done. 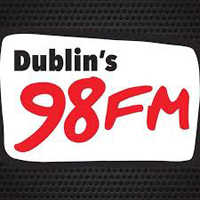 On Thanksgiving Day, when most of you were waking up to those wonderful aromas coming from the kitchen, we were all at Vicar Street, the chosen venue for this live adventure, rehearsing for the next day’s broadcast. It’s a rather sizeable dining and drinking establishment, just south of River Liffey, not a stone’s throw from the Guinness Storehouse. With a venue that easily seats a thousand patrons, it seemed the ideal spot to host this potential disaster. To say there was a mild sense of panic would be an understatement. But, Adelle Nolan, the producer and our hostess for the weekend, kept her cool throughout, and the practice session moved quickly from one stage to the next with a minimum of fuss.

I won’t bore you here with a blow-by-blow account of the actual broadcast. You can hear the podcast of it at www.98FM.ie any time, and I’m told that the video account (edited, I’m sure) will be posted soon if it’s not up already. I will tell you that any mistakes that were made were minor and certainly covered. Yes, I screwed up once by skipping a chunk of text, but I rolled back around and dropped it back in without anyone noticing… I think. The listeners who attended seemed to be quite entertained with the music and the several “Panto” (short for Pantomime, a musical comedy stage show, typically put on during the holiday season) guests they had on the show. The bands performed brilliantly. I was actually inspired to grab a copy of The Corona’s new album and was delighted to get a Keywest CD the following Sunday as we watched them perform on Grafton Street.

If reading about this is making you think about possibly putting on your own “naked” morning show, I should point out that the social media really lit up while the show was on, actually trending on Twitter. When Ray found out during the broadcast, the look on his face was priceless. On the financial side, 98FM had a difficult time at first with clients about the “live” aspect of the spots in the show. However, once the show was over, clients that went with the program had already made it known that they definitely wanted in if 98FM decides to do the show again. That’s kind of how new ideas work in radio. Until clients hear how brilliant it sounds in the end, they might be difficult, but this is a terrific way to generate non-traditional revenue for the station, once the client catches on.

The reason I’m telling you all this is twofold. If you ever get the chance to do a completely live show like this, jump at it. I haven’t felt so focused in my work since I used to pull a regular weekend air shift on Z100. My time spent doing VO work has been much shorter, with fewer out-takes and pickups, while a few clients have reported that my first read seems to be really ‘on the mark.’ My production time has been reduced as well, with a sharper focus on making sure all the elements are exactly the way I’ll need them to be in the final mix, instead of having to go back and adjust position, EQ or level. Taking that time as I build seems to pay much better dividends than having to go back and ‘fix’ stuff to make it all work.

The other reason is to simply pay tribute to the boys and girls, men and women at 98FM in Dublin. I always knew that JP was a really good writer with a particular acumen for humor, but now that I’ve met and talked with him, even dined with him along with most of the crew after the show, I can say how truly brilliant he is, without any qualifiers. His partner, Ray Foley (the show’s namesake) has amazing comic timing and a real flair for the dramatic understatement. At the same time, I saw that he is a deeply committed broadcaster who loves the medium AND his family, a trait I’ve seen before in most of the great radio talents I’ve known.

Pat Gill, my Z100 Creative Services Director counterpart at 98FM, and Damien Coyne, who together handle the station’s image production, really impressed me as well, especially with their work. Everything had great flow and rhythm, excellent processing and very thoughtful editing. Every piece I heard projected excitement and fun, drilled home “Dublin’s Best Music Mix” and made the station sound larger than life. The ONLY time I grimaced was when I heard a read I did that I thought could be much better.

On the air, Dara Quilty, who briefly interviewed me the afternoon before the Naked Breakfast broadcast, also reminds me a great deal of one of my other heroes in radio, Romeo of Saturday Night Online Live fame. They both have the same manic on-air style I love so much and, oddly, they truly look like they could be brothers.

After my quick on-air interview on Thursday, I had the chance to sit and chat with a number of the other folks there while Adelle Nolan was fine-tuning the scripts. I was SO impressed with the level of commitment and love of the medium. It reminded me of my early days in radio, when many times the General Manager was also the owner. Radio was much more personal then, especially at the “dollar a holler”, mom and pop operation that has all but disappeared from modern radio. The 98FM facilities are quite small, but this big-hearted group of true professional broadcasters, make it sound like so much more. Being used to working in a spacious studio, with every advantage a broadcaster could wish for, it really made me feel humble to know that the sound that they make every day in the heart of Dublin, is in every important way the equal of what we do in the heart of Manhattan.

When you strip away all the superficial trappings of being the big dog in the number one market, it all comes down to something as simple as the relationship between a radio station and that station’s audience. Good radio is good radio, regardless of the market. I am proud to associate my name with 98FM. They broadcast magic every day.

I usually like to add a track to the RAP Magazine CD of something I’ve recently produced, but this month I think the best thing I’ve done is appear on the Ray Foley Naked Breakfast show. That would be really difficult to put on the CD, being 2 hours long and all, so let me encourage you to drop in on their website and play the podcast. If nothing else, it just might inspire you to try a similar stunt in your market. Or not.

Dave Foxx is the Director of Creative Services for Clear Channel New York. He welcomes your comments and questions at .

February 01, 2001 16929
By Steve Cunningham Since the price of my electric service here in California is definitely going up, it’s some consolation that the price of digital production gear is still going down. About a year ago I reviewed the HHB...
Read More...
© 1988 - 2022 Radio And Production, LLC
Go to Top