Recently I have started watching the entire Mad Men series on Netflix. If you have been living under a rock, it’s a show set in the ‘60s about a New York based ad agency. In one of the episodes, legendary ad man Don Draper is facing a meltdown. His agency’s clients are deserting. The partners are squabbling. Redundancies will have to be made. Peggy, his trusted copywriter, asks Don what they are going to do.

‘We’re creative. We’re gonna sit at our desks typing while the walls fall down around us. Because we’re the least important, most important thing there is.’

This struck a chord in me and summed up how I feel about being in the ‘creative’ business. When it comes down to it, our job is to create, no matter what’s happening around us. People we work with depend on us to be creative at a moment’s notice. Creative is critical in our business, and it takes a certain type of person to step up to the challenge.

This month’s Producers VU takes you to New Zealand where we talk imaging with Kieran Bell from New Zealand Media & Entertainment. He started imaging as an intern 7 years ago, straight out of the New Zealand Broadcasting School where he got his degree, a Bachelor of Broadcasting Communications.

“I have always had a huge passion for audio production, warping and manipulating sounds, and it was during my time as a student that I learned about imaging and knew it was what I wanted to pursue.”

We are going to see what his creative process is and dig deep into his audio bag of tricks and see how he creates magic in New Zealand.

I picked Kieran to do this month’s VU because his work has a consistency about it. I can tell just by listening that much thought was put into creating the promo. It was well written, well produced, and creative.

“I definitely always try to work on things and improve. I suppose every promo starts with an idea and that idea can be executed so many different ways.”

Kieran knows that imaging a CHR station is about creating unique promos that are DIFFERENT to what the listener is used to hearing. I appreciate a producer that is willing to go off the beaten path and play into the minds of the listener. Sometimes you just have to produce something that sounds so different from the norm to get the listeners attention.

The promo Kieran sent us is ZM’s promotion to create awareness of ZM’s new breakfast show, "Fletch, Vaughan and Megan". The concept was your classic, hijack another form of media to promote an alternate form of media. He admits it’s not exactly an original concept, but the promotional trailer he created was something that hadn’t been done before on radio in New Zealand… or perhaps anywhere.

In the trailer, he wanted to give examples of how listeners could hijack other radio stations, so he actually prank called two competing stations. To put this into context, in New Zealand there are two main companies that own the main radio stations, Mediaworks and NZME.

The first audio in the promo gains the response of the host saying “ok, another idiot” which is, from his point of view, a perfect response. Great banter for the trailer. And the second call gets an even better response from the jock, “ha ha ha ha!”

One huge aspect of these trailers is that in each of the calls, it has the name of the station he hijacked, which in New Zealand, it’s a really big ‘no no’ to name any competitor station on another station, says Kieran. Luckily he has a very supportive PD, who is all for new and unique ways to promote.

I have to admit, one of my favourite things is to manipulate audio anyway I can. Let’s face it; we work in radio producing short little audio pieces that promote a very cool medium. I say use all the effects and processing you can get your hands on. Why not? If it sounds good, use it!

Kieran is very process driven when it comes to production. He’s all about saving time and making things as easy for himself as possible. He does his edits on Pro Tools 11 HD with an HD OMNI as the audio interface. Plugins-wise he uses a mixture of Waves, SoundToys, Izotope & Digidesign AIR plugins.

When it comes to vocal processing, he has 3 main tracks: Normal, Mid and Thin. Chain-wise he starts with the L1 to pull the audio together slightly, then a 2 band EQ to get rid of unnecessary low end, then a compressor, followed by a 6 band EQ where he crafts the desired sound of the VO, followed by De-esser and a final L1 limiter to finish off. Kieran is happy to share settings and expand on this if anyone wants to touch base with him.

“My go to FX send is a tight stereo delay that really brightens up any VO track. I also love using AIR Lo-Fi.”

His sound library consists of a few. WizzFX by Chris Nicoll and IMGR, which is a new one that has some awesome elements and work parts. 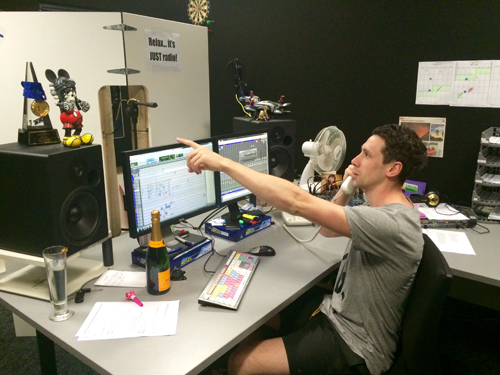 It was a pleasure speaking with Kieran about his production. He seems to have the right attitude and skill set to make magic in the studio. I like that he isn’t afraid to think outside the box and make old ideas his own.

“Curiosity about life in all of its aspects, I think, is still the secret of great creative people” – Leo Burnett

Creativity is something that we as ‘producers’ have inside of us. Some have more than others, and some really have to dig deep to find it. Kieran is one of those creative types whose mind is always thinking and creating his next masterpiece. He has a true passion for his art and it shows in his work.

Now it’s your turn. This column is truly your column and provides all of us with helpful hints and ideas. Send me your stuff at . It doesn’t have to have all the bells and whistles, just a spot on which you did some good work and would like to share with the masses. Make some notes about how you produced it to keep things fresh in your mind. And feel free to drop me a line with the questions that run through your mind as you listen to this month’s VU audio on the RAP Soundstage.

June 01, 2002 6789
by Steve Cunningham The venerable VoxPro editor has been around for several years now. Heck, it pre-dates consolidation, and the last time it was reviewed in these pages most DJs still worked live shifts. Much has changed since...
Read More...
© 1988 - 2022 Radio And Production, LLC
Go to Top