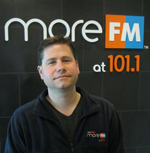 If you keep up with the ratings news in the trades, you probably caught the story of WBEB’s 17.2 share in the Holiday PPM. That’s not in their demo… that’s 12+. In a large market like Philly, that’s pretty much unheard of. So we decided to check in with the man in charge of imaging this ratings monster, and Steve Curry did not disappoint. We find out what kind of Christmas magic garners those kinds of numbers. We get a look inside the walls of this amazing radio station, one of very few privately owned large market stations that have held the #1 slot in the ratings, book after book, again and again. And we get a few insights into the mind of owner Jerry Lee. Be sure to check out the awesome audio from Steve, which we’ve posted here.

The last couple of columns have been collections of smallish topics that generally don’t warrant a column of their own. We continue this month with five more, with apologies to Jack Nicholson. Good movie, by the way…. [Check out Dave's Demi Lovato Weekend Promo here!]

It’s been quite a long time since we last looked at Sony’s Sound Forge for the Windows. How long? Well, about thirteen and a half dog years. In regu­lar years, it’s been since November of 2009, a nearly unimaginable stretch in the world of software. But there has been many an improved build of Sound Forge Pro 10 since then. Each of these has improved the product, while keeping it working smoothly with all the changes that have come with every Microsoft “Patch Tues­day” update. A totally non-scientific but unbiased poll (well, maybe a little biased) reveals many happy users of SFP10 on both Win 7 and 8, includ­ing your humble scribe. For you oth­ers who have not used it, Sound Forge Pro remains one of the quickest and most direct stereo editors available on any platform.

Radio Hed: Who Is Your Commercial Talking To?

When you’re doing a presentation, making a sales call, speaking to group, doing standup, you want to connect with your audience emotionally. When you know who that audience is, you’ll be more effective. It’s the same with your commercials. Engaging an audience of potential in­vestors concerned about having enough money for retirement is different than engaging an audience of young couples wanting to put aside money for their children’s college education.

Don’t tell me I’m a Production Director in a small market! I am, but don’t tell me I am because I’m not buyin’ it. I mean, I use the same editing software as a lot of big markets, and I have access to the same production music/sfx libraries as the big markets. I even have a major market voice, and my delivery is good enough to stand toe to toe with anybody. Not to mention there’s a real major radio market just 60 miles from here. I may work as a Production Director in a small market, but it sure feels major here to me. And, being the Prod Director for this cluster of stations, I aim to produce the commercials here accordingly.

"...And Make It Real Creative!": The Ghost in the Machine as a Young Artist

By the time you’re reading this, every Friend you have on Fa­cebook has “made” a movie of their time on the social site. Touching, funny, with sentimental music and a selection of pictures and words from their posts that would bring a smile to even the most jaded viewer… and a tear to the eye of their more emo­tional Friends. They seemed to pop up overnight, and like Lemmings, every­one followed suit and added one to their FB page.

The Monday Morning Memo: The Day After This Day

The principal benefit of creative thought is hope. New possibilities are electric, and hope is the light that shines from them. Creativity is the source of hope even when your hope is in God: “I don’t see a way out of this, but I’m betting that He does.” We depend upon God’s creative thoughts to do what we cannot. I’m sorry if my mention of God annoys you. (Just for the record, He is never annoyed when I mention you.) Creative thought is much on my mind these days.