Get Ready for 2014: New Products Seen at AES

Okay, you might have the coolest production studio in town with the best gear available – at least when the corporate office built it during the last consolidation. But I’m here to tell you things are about to get really interesting in 2014.

How about some amazing new microphones, a smooth glass mixing console with no faders, and the latest in Pro Tools technology, all waiting for you?

I had the opportunity once again to attend the 135th Audio Engineering Society (AES) conference and convention at the Javits Center in New York City back in October. The show moves through the Big Apple every two years when it’s not anchored in San Francisco, and this was one of the best in a while.

The show is for all audio disciplines – not just radio – and encompasses music recording, live sound and audio for film and TV. But if you love audio and love being creative, you should have been here.

Get ready to start annoying your boss – this is the stuff you are going to want in your studio in the New Year.

I will tell you there were some microphone manufacturers there you may never have heard of. Being radio people, we probably don’t stray far from our RE-20s and SM7s. But there are plenty of mics you need to know about, and one of them is out there that will make you sound like a millions bucks.

Right out of the chute, you have to know about the Neumann TLM-107 condenser, the newest innovation from the legendary German manufacturer. It’s got five polar patterns (in Omni mode it has a glorious rise in airiness centered around 12 kHz) and a decidedly modern twist to the classic Neumann look. Is it cheap? Hell no, but it’s among the best mics you will ever hang in front of your pie hole.

If high-definition audio is your goal, Earthworks makes really flat mics that scope out to 50 kHz on some models. I liked the SR40V, which looks like a conventional handheld vocal mic, but tops off at 40 kHz – a full octave higher than the sample rate your station probably uses as a house reference. 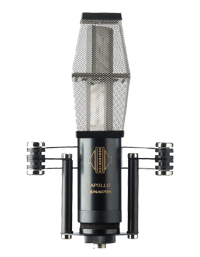 Sontronics rolled through New York with some incredibly artistic mics. Looking to all the world like an air raid siren from the future, the APOLLO stereo ribbon microphone definitely drew attention. 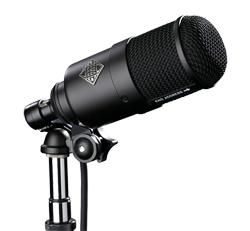 Count on Telefunken for its legacy condenser mic line, including the U47 and U48. I was drawn to the new M82, surprisingly a dynamic mic intended for vocal performance and kick drum recording. To my ear, it reminded me of the broadcast favorite EV RE-20, and had an appealing German vibe even though it’s made in Connecticut.

Another mic built in the Nutmeg State is the Charter Oak line of tube and solid-state condenser mics. I recommend you give a listen to the company’s S700 Broadcast Condenser.

Podcasters have been digging the Blue Snowball and Snowball Ice USB mics for some time now. The company debuted the Spark Digital mic, intended for direct connection to iPads as well as USB.

Ever hear of Lewitt? Me neither. But man, they make a mic I wish someone thought of before now. The LCT 940 is both a FET and tube mic inside one body; you can continuously blend the clarity of one along with the warmth of the other to get just the sound you want.

Sound Engineering wasn’t content with one tube in a mic body – they went ahead and put two inside the Gemini II condenser microphone. A 12AX7 on the mic side and a 12AU7 in place of the output transformer means you’ve got the warmest sound in town.

Still rocking the ribbons, California’s AEA company introduced the N22 phantom-powered ribbon mic at the convention. At a little under $900, the company is targeting home studios and musicians, but if you prefer a certain deep-rubbed finishto your vocal timbre rather than modern crispness and precision, a ribbon might be for you.

Favorites from Audio-Technica and the always affordable MXL microphone line were also in abundance at the AES. But one non-mic product caught my attention, just for its innovative nature. 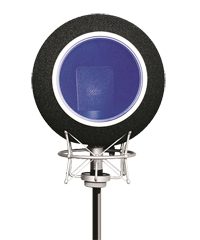 We’ve all worked in rooms with crap acoustics and tried various ways and means to minimize the slap, ring and annoying resonance a badly-designed room causes. A few of us have portable foam “booths” and baffles we use to try and rescue a recording (voice guy Harlan Hogan has his name on such a product), but a company called Kaotica came up with a slick solution: the Eyeball.

The Eyeball is a small foam sphere with a hollow interior that fits over many side-fire mics, essentially becoming a tiny absorptive environment right around the mic, where it can do a lot of good. It packs easily, looks interesting and really works well. If your boss won’t foam the studio because it’s too expensive, get an Eyeball.

There were not a lot of DAW manufacturers in attendance this time out, which is unfortunate. There are some innovative products out there from Harrison, Steinberg and Sony, to name a few. And Cockos – the company that produces the Reaper DAW – is based in New York City, so it would have been nice to see them working the floor. But happy to say AVID made the trip to show off the latest version of Pro Tools and its vast family of third party developers.

The last time the AES show was in NYC, Avid rolled out Pro Tools 10. This year, Version 11 was front and center. And there is no denying that Pro Tools rules the roost: most every booth displaying some sort of multitrack audio project as its demo was running it under Pro Tools.

If your projects require 96 tracks of audio, PT11 delivers. And Avid made it possible to have multiple times processing power on the same hardware you loaded version 10 on. For powerhouse radio production, it is hard to deny Pro Tools its place.

However, there were alternatives. The supercharged Samplitude Pro X suite from Magix was being shown. Coming a long way since its debut 20+ years ago as a sample editor for the Amiga computer (no kidding!), Samplitude now allows full audio and MIDI recording, editing and mixing; as well as mastering and CD/DVD authoring. If Pro Tools isn’t your thing, Samplitude deserves a long look.

I was glad to see that Sound Ideas came to New York; I just wish other sound effect and production library companies did. The company added new material to its General line, and released disks with dogs, birds, basic Foley effects and the Mix XIV music collection.

I’ve enjoyed some nice extensive sound effect collections in my career, but it is a bit hard to wrap my head around the fact that I can buy a hard drive from Sound Ideas with 179,993 effects on it.

In the middle of it all, it was nice to find out the Eventide Ultra-Harmonizer is still with us. While the company was promoting its line of musician-type “stomp boxes”, I found it hard to stop twiddling the controls on the H8000FW rackmount “Multichannel Effects System”, as they call it these days. Sorry, to me, it’s still a Harmonizer.

I don’t know about the rest of the crowd, but the big Gee Whiz item for me this year was the Raven MTX from Slate Media Technology. Imagine sitting down to a slant-top glass surface where, upon power-up, your favorite DAW environment appears. So far, that’s the Raven. But it’s not just a large monitor – this is a multi-touch production console: touch a fader on the screen and it works like a physical fader. Grab more than one virtual control and make adjustments, grab multiple faders and move them in opposite directions, highlight tracks... whatever you do with a mouse on your screen, you can do directly on the DAW surface. 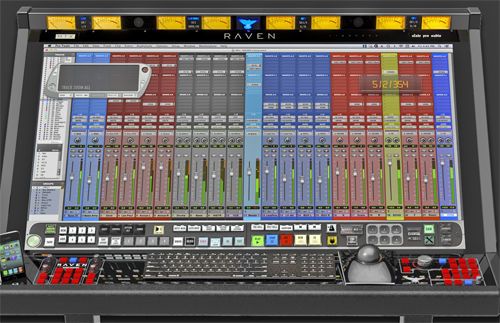 The company makes a more compact 27-inch MTi version, if you don’t need the big picture or if you are in a small room.

There was so much more there for the creative audio freak, but the only way to take it all in was to be there, in person, at the AES convention. The next time it comes East to New York’s Javits Center will be in 2015. Meet me there, ‘cuz I’m not going to miss it.

February 01, 2014 6494
by Steve Cunningham The popularity of all-in-one plug-ins continues to increase, as more manufacturers repackage and re-skin what they previously sold as individual plug-ins into a single product. Many simply toss some...
Read More...
© 1988 - 2022 Radio And Production, LLC
Go to Top