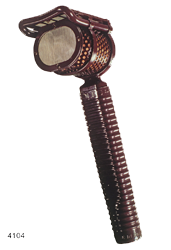 Whovians rejoice! The BBC television series “Doctor Who” resumes in August, imported to the U.S. primarily via the BBC America cable channel. A good part of your audience will likely consist of fans, so it’s time to have a little production fun all month.

If you are familiar with the program’s history, you are familiar with the “Daleks”, a race of murderous machines that have tormented The Doctor since the 1960s. The actor responsible for bringing the voices to life uses a Coles 4104 “Lip-Mic” ribbon microphone (see pic), slightly overdriven and fed through a Moog “Moogerfooger” ring modulator to achieve the terrifying “Ex-terminate!” shouts the Daleks are known for. Using gear we already have, it’s easy to recreate this effect.

Get right up against the mic screen to deliver your chosen lines (in a clipped, mechanical British accent of course). Roll off the lows a little and add in a touch of distortion with whatever process is available in your software. Now to complete the effect, dial in the secret ingredient: some ring modulation to get that metallic, malevolent sound that Daleks are famous for.

Ring modulation – named for the diode ring circuitry originally used to create the effect – accepts two signals and, rather than mixes them together, outputs the sum and difference of those signals. With your voice recording as one signal and a sine wave of 20-30 Hz as the other, the result is surprisingly Dalek-ian.

Some DAW software actually calls the process “Ring Modulation.” Others do not. In Cool Edit and Audition, you need to generate a sine wave and use the Mix Paste/Modulation function. In Audacity, you’ll need to download the specific Nyquist ring mod plug-in. Glitch, from illformed.org, contains a respectable modulator plug-in as well. Or you could always buy the Bomb Factory “Moogerfooger” plug-in suite.

If your station is doing any kind of Doctor Who promotional tie-in, on-air promos done up in Dalek voices will ex-terminate the competition.