One of my most prized audio tools is not a vintage microphone or a boutique preamp. It’s a bit of software, albeit a very complex bit of software, that comes courtesy of the boffins at iZotope. We took a gander at iZotope’s RX plug-in back in February 2008, when it was at version 1 (as in Uno!). Since then others have released plug-ins that perform many of the same noise-reducing tasks, including most of the heavy-hitter software companies like Waves, Sony and even CEDAR, who is considered the granddaddy of noise reduction. Despite both product and pricing competition, iZotope’s RX product has continued to dominate the market, gaining a reputation amongst audio engineers as the go-to noise killer. It has certainly been mine for the past five or so years.

Not content to sit on laurels no matter how well-deserved, iZotope has tweaked and polished RX up to and including its just-released version 3 (actually released five days ago as of this writing). There are enough changes and improvement in the product that it deserves a second look, so let’s git ‘er done. Note that where I mention the RX product, you can assume that I’m referring to version 3. 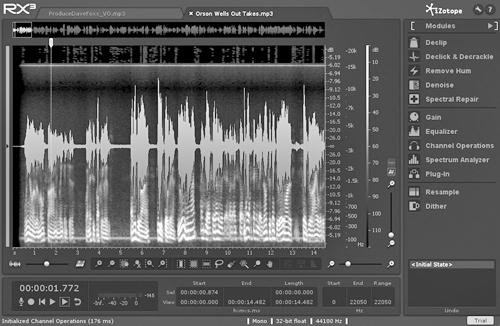 iZotope’s RX is a software Swiss Army Knife containing all the tools required to clean up just about any problem in audio. These include de-noising, de-clipping, click and crackle removal, hum removal, and spectral repair which allows one to target a specific range of frequencies for reduction or removal. In addition, RX includes a six band parametric equalizer, gain, channel and phase changing operations, plus sample rate conversion and dither. I think that about covers it, don’t you?

RX comes as both a standalone application, and as a plug-in for use in a stereo or multitrack software editing program. The plug-ins come in any of the usual formats, including AAX (for Pro Tools 11), RTAS/AudioSuite (for Pro Tools from version 7.4 through version 10), VST and VST 3, and Audio Units. RX runs under Windows from XP through Windows 8, and on the Mac OSX from 10.6.8 up to and including 10.8.4 of Mountain Lion, the latest version I have. It is also available as both a 32- and 64-bit application, which means that if your computer and OS can handle 64 bits, then with the 64-bit version you can access well in excess of 4 GB of memory. This is not only a benefit for working with long-form material, but it also means more processing can done in RAM where it’s faster than in previous versions. Finally, the software is written to fully support multicore processing, so if you’re fortunate enough to have multiple dual core or quad core processors in your computer, you’ll find that RX version 3 screams.

RX is copy-protected, and you have a choice when you register the product of using a challenge/response serial number system, or of using a $50 iLok (of course if you already have one you can simply add the auth to that iLok). I chose the iLok, and I’m doing that more often than ever because I find the iLok to be convenient when working on multiple editors and multiple computers. I can move the iLok between Macs and Win boxes without having to think much, and my plugs are available wherever I’m working. In either case, the program will work as advertised during a 10-day demo period, except that saving is disabled, so you’ll have time to see if it works for you.

October 01, 1993 12667
by Jerry Vigil This month, we don't Test Drive any one particular piece of equipment, but instead kick the tires on three new and interesting items found at the recent NAB convention in Dallas. The AirCart from AirCorp Systems A...
Read More...
© 1988 - 2022 Radio And Production, LLC
Go to Top