Believe it or not, my sister is a real-life, honest-to-goodness rocket scientist. She worked for the company that developed the B1B Bomber, among many other things. She actually laughs aloud whenever somebody says, “You don’t have to be a rocket scientist.” She tells me it’s not all it’s cracked up to be. (To be fair, she really IS pretty smart, probably a lot smarter than me.) Having said that, I want to help you understand that creativity is not rocket science, or more precisely, being creative is a lot simpler than being a rocket scientist, but it does require some effort. 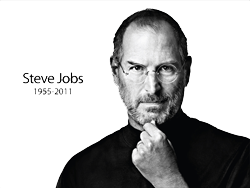 To give you some perspective, I quote one of the most creative minds in modern society’s history: Steve Jobs.

Creativity is just connecting things. When you ask creative people how they did something they feel a little guilty because they didn’t really do it, they just saw something.

Unfortunately, that’s too rare a commodity. A lot of people in our industry haven’t had very diverse experiences.

So they don’t have enough dots to connect, and they end up with very linear solutions without a broad perspective on the problem. The broader one’s understanding of the human experience, the better design we will have.

Whether or not you are a fan of the late Steve Jobs and his company, Apple, there can be little debate about his impact on the lives of just about everyone. His brand was recently declared the most valuable in the world, surpassing the previous long-standing champion Coca-Cola (now 3rd), Google (2nd) and McDonalds (7th). His innovative ideas about technology and how we interact with it, has changed the modern paradigm of living.

This column’s main reason for existing is to help you excel at radio production. Each month I try to pass along a little nugget of wisdom that will help you unleash the creative beast within and hopefully push your career to new heights. When I stumbled across the quote above on the Internet, I was struck by how similar his words were to one of my main themes. You can’t be creative if you spend all your time trying to be creative. You have to have a huge bank of experiences you can draw from. Otherwise, your work will be flat, or as Steve Jobs said, “linear.” That will stifle your career, not enhance it.

Creativity is not an endless font of ideas that you can dip into day after day unless you live life. I can’t write/voice/produce promos about concerts unless I go to concerts. I doubt I could make an effective spot for a car dealer unless I had gone through the process of buying a new car and know what that’s like. One of the sure signs of a truly impactful promo is goose bumps on the arms. That never happens unless you can relate to what is being conveyed.

The really great comedians don’t tell jokes… they make observations about life. Is there anything funnier than Patton Oswalt talking about his daughter at dance class? Jeff Dunham’s Ahmed The Terrorist is one of the funniest characters I’ve ever watched, but he’s not telling jokes, per se. He’s relating situations that play on everyone’s life experiences. One of John Pinette’s funniest stories revolves around his dining experience at a Chinese Buffet, something I’d wager we’ve all done at one time or other. (If you don’t know any of these comedians, go online and look for videos of them doing these bits.)

I know that many of you spend your days churning out the work and you don’t always have the luxury of taking your time with a project to make sure it’s creative and compelling. I know because I’ve been there. In fact, I am still there on many days, when the work just seems to keep coming at a lightning pace. But not every day is like that. There are always a few days in the month when the work is not fast and furious. If the weather is nice, I’ll go sit in the tiny park across the street for a bit and people watch. It’s amazing how many ideas I’ve taken from Tribeca Park. If I know there’s nothing major pending, I might even hop on the subway and head up to mid-town Manhattan and stroll Times Square. I can often be found sitting in my studio, reading the New York Post or cruising the Internet looking for quirky news stories. I am constantly filling my well with life experiences that will one day, turn into promo ideas.

Shopping for groceries, going trick-or-treating, watching fireworks on the 4th of July, playing or just watching a softball game, washing the car, buying a fancy coffee at a local shop, even doing chores around the house ALL make excellent situations you can pull creative ideas from. It might seem mundane to you at the time, but I’ll guarantee you that someday, you’ll need that experience to make a point in a promo or commercial. I went shopping last week for a power converter for my car cigarette lighter to USB and found what I needed at a little kiosk in the middle of a local mall. The interaction I had with the vendor will no doubt end up in a promo one day, though I doubt it will have anything to do with buying a power converter.

If you want to be truly creative and innovative in your work, you need MORE of that kind of interaction in your life. Sitting in your studio, insulated from the world and real life will never pay that kind of dividend.

I know I have given this advice before, but it’s the lynchpin to real creativity and cannot be stressed enough. If you don’t like to read, you’d better learn to like it, because the lion’s share of my great ideas came from things I’ve read. Read at least one book a month. It doesn’t matter what genre, just do it. Read one or even two newspapers every day. Read three or four magazines every week. You also should be watching a lot of TV every week. I know that a lot of it is really stupid and silly, but like it or not, your audience is watching it. If your format is CHR, make it a rule to watch Entertainment Tonight or E! Entertainment because they talk about the artists you deal with every day. Go to the movies once a week. Again, the genre is not as important as experiencing the movies your audience is watching. Sporting events have to be on your list too. Just going to a Little League baseball or Pee Wee football game, even if you don’t have kids playing can be a rich source of life. Watching the parents will give you ideas for a ton of projects. It can certainly be a pro sports event too. People at football games are absolutely crazy.

Steve Jobs is so right. The most creative ideas come from putting two or more life experiences together and synthesizing something completely new. Just yesterday, a good friend of mine in the industry asked for some help writing new sweepers for his radio station, saying, “You’re one of the most creative people I know.” How could I say no? I sat down and wrote almost 20 sweepers in about 10 minutes. Were they all gems? Of course not! But they came flying out of my brain because I keep it jammed with life experiences that my (his) audience can relate to. Does that make me smarter than you? I highly doubt it. This is my point: Anyone can do this. You don’t have to be a rocket scientist, you just have to live life outside the radio station and learn to watch and absorb.

My sound this week is centered on a fun concept we do a couple of times a year at Z100. Instead of waiting to the end of the year for the usual countdown of top 100 songs, we’ll stop things down and do a Top 25 or Top 50… SO FAR in May or July. There is no show counting them down, but rather we highlight songs across a weekend and then post the full list on our website. The CHR audience loves a countdown and will usually try to vote for their favorite song over and over again to make sure it’s a winner. The promo features some fast cuts, a few hooks and is absolutely fun to listen to, I think. I hope you do too!