Outside the Box: The Cardboard Box 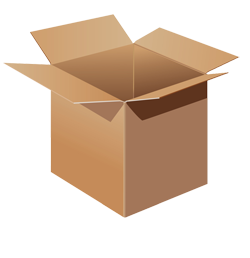 Robert Cudd Jr., or Bob as he is known to his friends and family, will turn 72 years old this year. He’s been a widower since 1995. Bob served six years in the Navy right out of High School and then went to work in Retail, Finance, and Collections. He now lives in an Assisted Living facility and often video chats with his son on Skype. Bob got a new All In One HP computer, and checks e-mail, surfs the web, plays solitaire, and reads almost every paper in the country when he isn’t in Physical Therapy or shouting at the Television News Anchors. Bob is a quiet and likeable guy. He forgets things from time to time and doesn’t get around like he used to. He still has a great laugh, knows how to flirt, and can still light up a room. Bob, if you haven’t guessed yet is my Dad. Our relationship is not as strong as I wish it was, but it is much more solid now than when I was growing up. Partly because since he is alone now, I need to be more involved in his life. The other part is he worked so much that he was rarely home, and when I grew up I left to pursue Radio across the country. Time and distance didn’t sour us on each other, and now we try to chat as often as possible. I still get to South Carolina when I can, especially that I live closer now and my wife really likes my Dad too. My father loved to tell me stories, and over the years he has told me some good ones. Stories about when he and his friends snuck into the outhouse to try cigarettes for the first time, and with smoke billowing out of the crescent moon in the door, someone went and told my Grandfather that the outhouse was on fire. Having no indoor plumbing, you can imagine the value the outhouse had on my Dad’s family, so all I could picture was my Grandfather running in his overalls and railroad cap holding a pail of water to douse what he thought were flames inside the door.

Aside from the great stories about his childhood, school antics, how he met my Mom and even stories about his Rocket Club, he often loved to tell me stories from his work and career. I want to share one of those stories with you, and I can assure you it is true and complete to the best of his knowledge. Once he worked as a General Manager to a regional retail chain owned by the Cato Corporation out of Charlotte, North Carolina. The stores were called Waco, and Dad was the GM of the Commerce, Georgia location. Commerce was then as it is now a small rural community that has seen some growth over the years, but at the time was largely home to a farming population. The Cato Corporation is best known as a clothing retailer, but at one time they did try their hand at retail merchandise aside from clothes. I tried to do some research on the Waco brand but found nothing. I imagine the stores faded into obscurity over time, and since they really weren’t ever truly successful over the long term, Cato would probably hope you forget them too. But way back when, in Commerce, Georgia, Bob was a busy General Manager, fresh from the Navy with aspirations of being a buyer for the company. He dreamed of moving to Charlotte and working in the high rise buildings, searching and negotiating different items from various vendors and determining their price to be sold in Waco stores across the chain. Bob was really shy, something he had to overcome after the Navy, and found that process challenging when he entered the workforce. Thanks in large part to a curious mind about human behavior, a work ethic instilled by my Grandfather, and a Navy veteran interviewing him for the GM job, my Dad got lucky and landed a pretty sweet gig for a young guy with no College degree.

On a particular insignificant day, Corporate sent his store an inventory of small plain long and narrow cardboard boxes, which each held several settings of flatware. Bob knew it was flatware because on the plain cardboard box with no picture, there was an elongated sticker which simply said “Flatware” and how many pieces were inside. Bob priced the boxes as he had been told, and set them on the shelf. Weeks went by and Corporate sent out a notice that they were having issues moving a certain item in inventory. It seemed that those small non-descript cardboard boxes of flatware were accumulating, absent the chime of the cash register. The notice detailed a desperate plea for GM’s to part the Red Sea, heal the sick, and make a miracle. “Get these boxes sold, we want them gone.” Bob knew the buyer of the company had bought lemons, and assumed that by simply placing them on the shelf and pricing them that they would move. After all, everyone needs flatware. Bob thought and thought, and paced back and forth thinking of how in the world he was going to get those ugly ridiculous boxes of flatware to sell. He took one off the shelf, opened it up and looked at the bundles inside. Forks were bundled and wrapped together and spoons were wrapped together, and so on. Suddenly, Bob got an idea.

He first determined what each bundle was priced at individually inside one box. In other words, if you took one bundle of spoons from a box, what would they be priced at in order to get the profit margin for that box. Then he determined if he sold each bundle for twice that, once he sold enough bundles to fill one box he would have sold two boxes worth of profit. Bob knew his customer, and knew that farmers and townsfolk were on pretty tight budgets. They did not buy luxuries, and their mindset was different from Corporate. Where the Corporate office assumed people who need flatware would buy a set, Bob knew that local folks who needed forks or spoons would come buy forks and forks alone. He also knew that they could care less if they were mismatched and had different designs, something Corporate did not consider. He took a huge bin and placed it near the front door to the store. Then he removed every cardboard box on the shelf and dumped their contents into the bin. Throwing the cardboard boxes away, he then priced each bundle so that once he sold a box worth of bundles, he had made profit for selling two boxes. A simple sign was constructed advertising the price per bundle.

After a couple of weeks, Bob placed a call to nearby stores to see if they had any of those cardboard boxes of flatware. Store Managers were happy and ecstatic to send Bob their inventory, because they were unable to sell any of them at all. Demand was so good that even local Restaurants and Diners stopped by the Commerce, Georgia Waco to buy some flatware. Bob made several more calls to a few more stores and asked for their inventory to be sent over. Each call was met with excitement about ridding their books of the boxes, but also they wondered how this Navy veteran was moving such a difficult item. Word eventually spread to Corporate, and the CEO along with some key members flew down to Commerce in the company plane to investigate exactly how this young GM had managed to do something they couldn’t do.

Bob got his chance to share his logic with the CEO, and also made a push for the buyer’s position. The CEO and company flew back to Charlotte scratching their heads, and of course cashed their checks thanks to Bob’s efforts and ingenuity. However, they ignored the young GM’s innovation as a one-time fluke, and passed him over for the lavish and upper echelon buyer position in big city Charlotte. This story has been told to me many times by my Dad, along with several others, including having a line of farmers waiting on the store to open at 6am one morning so my Dad could sell box fans out of the back of a semi-trailer. On both of these occasions and many others, my Dad could have lost his job because he broke with company policies and procedures. He trusted his instinct about his customer and his local market. Since he was the one who lived there, worked alongside the customer, and had built an intimate face-to-face relationship with the area, he knew things Corporate never would. No research or survey can communicate intuition, and no amount of education can trump pure common sense. I am reminded of many clients who have come into a studio and told me they know their customer and their customer’s habits simply by research. Oftentimes I would tag along with the AE when they made a visit to walk around, see the location, and chat with customers. More than once what I discovered in my talks would be contrary and opposite to what our Client felt was truth.

On the rare occasion the Client would trust me, we always saw good results, and everyone got return on their investment. When companies think one size fits all, or their way is the only way, their future will match that of the Waco store. If you dare to get to the ground level and face-to-face with your challenges, you might just come up with a great “cardboard box” idea. If you do let me know, my Dad would love to hear about it the next time we are on Skype.