Outside the Box: What Did You Say? 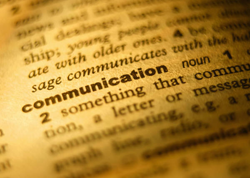 I am a very boring guy. I know this because in social situations when I begin to discuss things that interest me to a great deal, I suddenly find my audience dwindle and those who remain are either trying to be courteous and make me feel good because they are nice, or they are trying to stay awake because I am putting them to sleep.

Through serious reflection I have concluded that social gatherings should be best used for observation and answering small talk questions. Thus, I have decided to sit down and write about the things that I contemplate when sitting alone on a bench in the mall and people watch, or notice something listening to a TV or Radio station. This outlet has proved to be very good for my social life since I no longer discuss such things in public, but rather write about them here in this forum. If you are reading this to be nice or are falling asleep when you read what I write, to both of you I extend my sincerest apologies. My audience or readership may be contained to myself, and as one philosopher put it, we are our best company at times anyway.

As a former Copywriter/Production Director and curious fanatic of human behavior, I am fascinated by language, words, their usage, and effectiveness in advertising and marketing. Observing and considering the construct of phrases and terms to the relation of what is more effective has been a hobby for a number of years. My wife has discovered that I listen to conversations very closely and notice nuances she would never have considered. In examination of words and their use, I wondered how many words we actually have in the English language. Did you know it is almost impossible to determine how many there actually are due to the varied reasoning and subjective nature of usage of some words? I found this to be troubling, as if to say that there are words out in the ethos we could be utilizing but have yet to embrace or appreciate. There is also the fear that we are using only a small percentage of syntax possibilities in the same manner as to the amount of brain power we use in relation to capacity. Is it any wonder why we abbreviate and develop slang at times in text and e-mail simply to make our point as quickly as possible? It’s as if we have discarded the value of words and have attached much more concentration on quick, non-descript interactions. Granted, we haven’t devolved to grunting to each other like Tim Allen, but it sure seems we are coming close. I even recall a GM coming to me one day and telling me my e-mails were too difficult to understand and I should, in her words, “dumb them down”. To give my article some credibility, the second edition of the Oxford Dictionary and its twenty volumes has 171,476 words that are being used at present and 47,156 words that have become obsolete. With so many possibilities, why do so many advertisers say the same thing over and over thinking they will generate a different result?

Have we become so dependent on connectivity that we have forsaken engagement and relativity? What happened to finding meaning and purpose to what we say and how we say it? Instead we seem content to just walk through a world of headlines and two sentence blurbs as if that is sufficient for us in the grand scheme of things. Are we so busy that we no longer edit, not just for length, but for meaning? Come on, seriously, am I the only one who thinks that it would be so much easier to break through the noise of all the ads and garbage we are bombarded with by simply taking a few moments to consider what and how we are saying something rather than just how long it takes? Let me give you an example of what I mean. I once was responsible for writing and producing a ridiculous sixty second radio commercial for a yearly concert that had become so well established that word of mouth at the local college would generate more effective marketing than any ad I could ever construct. The event was so huge they actually held a party at a local bar to announce the acts that were coming. Surprisingly, the group behind the event kept this a secret from about 99.9% of the population. However, the event was backed and paid for in part by a very large adult beverage distributor. That means that it was up to a college degreed “Marketing Professional” to essentially “help” me do my job. Without fail, they wanted a sixty second commercial that I would do my dead level best to create an exciting and fun ad for about the first thirty seconds with endless concert hooks from the artists and crowd noise. I would give the dates, everyone knew the where, and I would hope to end the ad with the website name. The distributor would have none of that, because they inevitably would shrink my thirty seconds of fun into fifteen seconds and then occupy forty five seconds of useless information. Phone numbers, contest rules and regulations, explanations of promotions, and of course a ridiculous disclaimer that had to be at every end of every commercial. If they followed my plan, there would be no need for disclaimers in their ads and all that information could be found elsewhere.

I believe the ads would have been more effective with a simple thirty or even fifteen second ad that could deliver a bigger and better punch for their buck. How about creating an app to complement the webpage for the event and simply use the ad to get people to download the app? Let the app do all the work. In essence the station could have run more ads since they were shorter, meaning we would have made more money, the distributor would have achieved greater reach and frequency, which means everyone would win. But this refusal to consider what to leave out really drives me crazy. First of all, the website for the event was so jam packed with information, it almost seemed pointless to say what you were going to discover on the site anyway. Again, take the time to say what matters most and leave the rest to the customer to discover. It reminds me of a pet peeve of mine. In the age of Google and GPS, if I owned a car dealership there are two things you would NEVER hear in my advertisements. My address and my phone number would never be in any of my ads. Think about this, if the “money demo” is twenty five years old to fifty years old, or maybe forty five based on newer research I have read, why would you think like a print ad for broadcast that would better serve someone much older outside the money demo? I have yet to find a car dealership without some online presence, and most let you shop their inventory online. Why go to all the expense of so much information online, and then use your marketing time to barf up what you can find on the site? To me, it just makes no sense.

As a customer, I want to be enticed, drawn in, and left with a small degree of mystery. As humans, curiosity is one of the most potent behaviors we have, and to not utilize your ad in a smart way to entice curiosity is just ridiculous. Clients have got to stop thinking like they are writing a newspaper ad, and they must start deciding what to leave out. There is a local car dealership that has a very animated guy who does all their ads, and he is silly and ridiculous. They do what they call “fun” ads, he even dressed up as an elf and they shot him on TV smaller than Santa and pitched his voice really high. Is this effective? Is this what our digital savvy minds gravitate to? I disagree. First and foremost, I know this guy’s face better than I do what they sell. In fact, I right now can’t recall what brand of vehicles they carry. This could evolve into an article about the dangers of clients doing their own ads, but I digress. The key is there are things you should leave out. The way you say what you say is just as important as what you don’t.

October 01, 2002 6874
by Steve Cunningham I have to admit that the student’s words gave me pause. When I mentioned in my Radio Production class that I was reviewing a product called “MySoundStudio,” several students rolled their eyes. One said, “It...
Read More...
© 1988 - 2023 Radio And Production, LLC
Go to Top