Clients and Sales are the worst! Aren’t they? 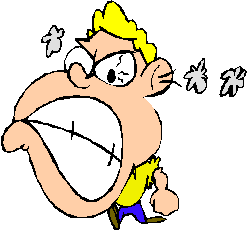 They’ve taken countless brilliant (subjective term) ideas of mine and turned them into complete shit.

I used to think that I could train them. Reason with them. Teach them to recognize the kind of radio ad that would help their business leaps and bounds above the drivel they torture our listeners with… but I must have failed. I must have not tried hard enough. I went into the “client vs. me” boxing ring full of confidence only to come out bloodied and beat.

Why do we have countless clients come and go who think they know better? Insist on doing it themselves? Make ads more terrible than the next?

My only conclusion is we’re in the entertainment business… and for a some, they can be a part of it.

But let’s leave the clients alone for a couple of minutes and move on.

They’ve taken countless brilliant (subjective term) ideas of mine and turned them into complete shit.

I used to think I could beat them. Yell at them. Take their skinny little ties and wrap them around a ceiling fan… but the Sales Manager would have none of it.

Why do salespeople do the miraculously counter-productive things they do, such as suggest script ideas that make no sense? Ask us if the client can phone in their voice track? Think a scripted testimonial from a 10 year old is a great idea?

Because they look after our client’s interests, and well… the client doesn’t exactly have great advertising in their best interests most of the time do they?

So what does all this mean? You’re probably thinking I’m going to suggest you pack up your mouse and laptop, and run as far from the transmitter as you possibly can. But I’m actually going to suggest the opposite.

We need you. We need you badly, and more than ever. I know that, because you’re reading this. You’re reading this because you want to be better at what you do. Write better scripts. Produce better audio. Make the person at the other end of the speaker listen with every fiber of their being and be completely taken in by what you’re communicating.

So here’s the difference that separates you, from them.

You’re the one who’s there in it for the listener, and nobody else.

The client cares about their business. And of course, so should you. But you’re looking at how their business is perceived to your listening audience. You don’t care that the receptionist at the Tire Shop thinks the ads aren’t funny enough.

The salesperson cares about the client, and wants to make sure they’re happy. So if that means telling you the ads should be funnier because Suzy the receptionist thinks so… well, so be it.

You’re the one… who cares about their customer -- ironically when it comes to advertising, more than they do.

I rest my case.

1st : Get rid of the perceived power. I’m betting the person reading this thinks the salesperson, the client, the Sales Manager all have more “power” than you do. You may even feel bullied by them. Stop it. They have no more power than you do to effect change and influence your clients. I know you’re thinking “bullshit”, but it’s not.

2nd: Keep it in THEIR best interests. If you’re suggesting an idea, a meeting, a change in the status quo, make your reasons about them. They’ll make more money. They’ll gain more customers. They’ll look like a superstar to the attractive receptionist… I don’t know, just show them how it’ll make their life better and you’re way ahead of the game. You can only talk about their needs, not yours, in order to win.

3rd: Be the most knowledgeable ad person in the building. The smartest person in the building is the equivalent of 20 black belt Ninja masters versus one skinny pale teenager with a runny nose. Knowledge really is power. That’s why people hire consultants, go to training seminars, and seek advice from people they admire. If you have the knowledge to back up your ideas, it’s pretty tough to argue.

4th: Tact. Do NOT be a jerk about it. When it comes to producers, I’ve only run into 2 kinds. Jerks, and non-jerks. The A-holes of the business will never get any respect. They think they’re being tough, or holding fast to what they believe is right. Nope, they’re just a-holes. Be nice.

5th: This is a tough one, but it really does help. Win as many awards as you can get your dirty little hands on. It sounds vein I know, but it’s hard to argue with someone who has 30 trophies sitting behind them. If you’ve never won an award, or think your work isn’t worthy, seek out those who have and find out how they do what they do. Get your hands on their sessions, ask for advice. They’re all people just like you, working for a living trying to get better.

Oh, and if you doubt any of this advice, let me back it up a little bit.

I work alongside the guy who’s won the most R.A.P. Awards in the world, Ross McIntyre (did I just name drop in the geekiest radio way ever?). I’ve learned an unbelievable amount from him, and when I go back and read this article, I realize that all of these qualities I learned from Ross. He makes it about the other guy, not him. He’s insanely smart, and he’s the nicest person I’ve never met.

I’m sorry if you were expecting someone to give you another lesson on compression ratio, or how to tell your clients story. Today, I’d just like to tell all the creative folks out there to have confidence. If you don’t have confidence, read some books, gain some knowledge, and get confident in yourself. Have courage. Because you didn’t get into this business so you could type “supplied” onto your scripts and hope it turns out better “next time”. You got in it to create great work.

So I guess clients don’t suck. They’re not the worst.

And salespeople don’t suck, and they’re not the worst either.

Maybe it’s just us, and what we let them get away with.

I say, let the other guys look after everyone else’s interests. The listener is depending on you.

July 01, 1989 12477
Where would us lowly production types be without the apparent war going on between manufacturers of digital processors. In an effort to make the best product they can for the budget minded, starving musicians of the land, these...
Read More...
© 1988 - 2022 Radio And Production, LLC
Go to Top