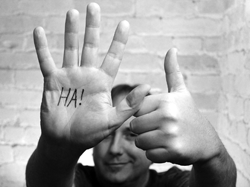 Grammar and spelling errors are at pandemic proportions on Facebook... just check out failbook.com or lamebook.com. That’s something Radio people need to take seriously when they’re using social media. But here are some things you’ll hear from radio people that are hilariously wrong. Yes, I know there are exceptions to every rule, but NOT this first one.

6. Young baby. Wait, what? Of course the baby is young... it’s a BABY! Same problem with young child too... though you could make the argument it’s a toddler... but then you could always say toddler. It’s great when we’re told that a woman gave birth to a baby... Really?!? A Baby!?! How often do women give birth to babies? She didn’t give birth to a porcupine? Hilarious.

5. Gambling Casino. Wait what? What other type of casino is there? A bathing casino? An exercise casino? Do you go to an eating restaurant? A teeth dentist? A dead people funeral home? Using the word casino covers it.

3. The best kept secret. Wait, what? But you’re talking about it on the radio! It’s a terribly kept secret! Maybe it was a secret... or maybe the secret is now out, or it’s becoming one of the worst kept secrets... but it’s NOT a best kept secret! Who exactly was keeping track of our secret keeping anyway?

2. Fatally wounded / fatally killed. Wait, What? The first one means dead... the second one means dead... dead. Badly injured is funny too, but for a different reason. Does this mean the injury was poorly executed? As in, not a good injury? Ohhhhh, you mean Seriously injured?

1. Right now it’s currently. Wait, What? More redundancy. It’s like saying it’s 8 a.m. in the morning, or 4 p.m. in the afternoon. Extra words we don’t need.

Some people call this nit-picking. But really, if writers, and producers and announcers aren’t using language correctly, then what chance does everybody else have? Think about that before you slap “Got” into a script instead of “have” because you think it makes you sound cool. Really, in most cases, it just makes the station sound dumb.

October 01, 1999 7803
by Steve Cunningham Multitrack DAW software keeps getting, well, bigger. Sixteen tracks! Sixty-four tracks! Two-hundred-eighty-two-and-a-half tracks! This is all well and good, but most of us spend our time working with good old...
Read More...
© 1988 - 2023 Radio And Production, LLC
Go to Top