Hailing from Baton Rouge, LA, Presonus has been around since 1995 and has achieved success primarily with its moderately priced series of audio interfaces and rackmounted effects processors. While the company was always responsible for writing its own hardware drivers in software, along with the graphic user interfaces in its mixers and effects processors, Presonus officially entered the big leagues of software multitrack editing in late 2009 when it acquired KristalLabs, a German software concern founded by former employees of Steinberg, and with whom Presonus had been collaborating since 2006. Along with the company, Presonus also acquired the object of that collaboration, namely a multitrack software audio editor known as Studio One.

The first version of Studio One was a lean and mean multitrack recorder, with a good set of the editing features needed by folks who cut sound for a living. It was (and still is) cross-platform, simple to learn, and very fast in use. There were certainly some features that were missing compared to other editors, including several that fall into the audio editing category and were essential to making dialogue cuts quickly and accurately, which is part of the reason I decided to wait to review it. But recently Presonus released version 2 of the Studio One product, and it’s high time to take a look.

Studio One is a software multitrack audio editor, which allows unlimited tracks in all versions save the Free version (see below). All recording is done in Broadcast WAV format, at sample rates up to 192 kHz and resolutions of 16, 24 or 32-bit. Both the Mac and PC versions of the software are fully 64-bit capable, which means there’s support for files bigger than 4GB. Other formats, including AIFF, Ogg Vorbis, and FLAC can be imported, and MP3s are automatically converted to WAV. Studio One is interface agnostic, meaning you can use anybody’s interface so long as it supports Core Audio on the Mac, and ASIO or Windows Audio on the PC. On either platform, you’re going to want a Core 2 Duo or Quad CPU with 4 GB of RAM, running Windows XP, Vista, or 7, and Mac OS 10.6.8 or better.

Installation of Studio One is a piece of cake. Current versions are available on the Presonus site, and the paid versions use a serial number for copy protection. Once installed, a quick trip to the preference page will allow you to find your audio interface and enable it. There are benefits to using a Presonus interface, but there is no significant penalty for not using one. Once installed it’s time to fire it up and record something. 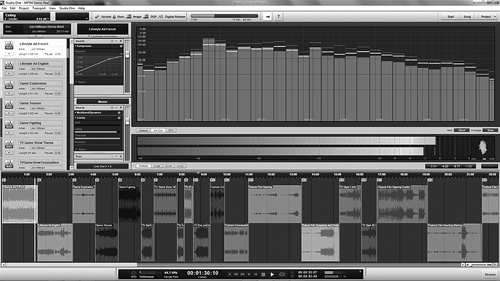 The Studio One interface feels much like Steinberg’s Nuendo, which makes sense given that the creator of Nuendo had a significant hand in the development of Studio One. There are two main windows: Song and Project (remember, we are dealing with a music-oriented product here, so you may have to get over the use of the word Song). The Song window is where you’ll spend your time recording and editing audio. In the Professional version only (see below) there is a Project window dedicated to mastering functions; it’s also where you may put some finishing touches of EQ or compression on your final product, should you actually engage in those activities.

September 01, 2001 18974
by Steve Cunningham All-in-one hardware audio workstations are popular among small recording studios, production companies, and bedroom musicians. They’re also used by some radio production types who like to work at home, after...
Read More...
© 1988 - 2022 Radio And Production, LLC
Go to Top