The Monday Morning Memo: High-Risk Writing - a peek, a glimpse, a conclusion

It is dangerous to write sentences that require the reader to think. Frankly, you would be safer to blindfold yourself and walk in front of a Taliban firing squad wearing a Jesus Loves You T-shirt. 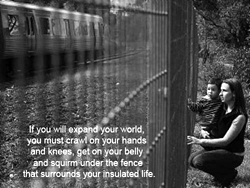 Here’s an example of dangerous writing:

A surprising number of people will read those three sentences and say, “I don’t get it,” and then, rather than think about it for seven seconds, send a condescending email to the author.

Yes, zombies are real. The dead walk among us and they know how to use computers. Need proof? Read Twitter.

Extremely dangerous writing doesn’t just require a reader to think; it assumes the reader to already know a vital tidbit of trivia:

In this case, the writer assumes the reader already knows that koalas eat nothing but eucalyptus leaves.

Could such a brazen writer succeed? Evidently yes, since both of the quotes in question come from the novels of Tom Robbins, one of America’s most beloved writers.

Tom Robbins doesn’t fear the Taliban. Most of us, however, avoid doing anything that might bring us to the attention of narrow-minded legalists who have no appreciation of whimsy and adventure. But these fears aren’t new. Sir Herbert Beerbohm Tree offered the following advice more than 100 years ago:

“Never say a humorous thing to a man who does not possess humor. He will always use it in evidence against you.”

Sir Herbert, it would seem, had felt the lash of the Taliban.

1.     To remind you that most ads aren’t written to persuade; they’re written not to offend. This is why most ads are boring. We are terrified by the prospect of criticism.

2.     To warn you that the Monday Morning Memo is returning to its roots, flying the Jolly Roger once again, wandering whithersoever the winds of Curiosity blow us, chasing the scent of Wonder like a beagle, scrambling with slippery feet up the mountain called Incredible, leaping from its pinnacle to grab a beam of light from the star that hovers above the Impossible Dream, using it as a zip-line to fly us into the next adventure.

When the white-collar criminals of Wall Street shook consumer confidence with the subprime earthquake of 2007, I decided to focus the majority of these Monday Morning Memos on subjects that small business owners would find clearly useful and imminently practical. Three years later, I’ve grown weary of my own writing.

Have no fear. I will continue to write useful tips about business matters. You need to grow your business and I want to help. Your business booms. The economy thrives. The world is made better.

Generally speaking though, I’m elevating my assumptions about the level of your intelligence and the breadth of your interests and knowledge. In other words, I will always assume you know what koala bears eat.

Thank you for not being the Taliban.