As most of you know, I use Avid’s Pro Tools on a regular basis. These days opening Pro Tools is a reflex that requires no conscious thought; while I greatly enjoy working out on some other editor (lately I’m on a Reaper jag), when a paying job comes in it’s usually just easier to fire up PT and get the work done...

...except when Avid releases a new version, at which point most work stops and I have to dedicate several hours to just get back to where I was with the older version. This has been especially true beginning with version 8 and moving forward, as recent versions have included some fundamental changes affecting my workflow. Usually I can pick and choose when I want to move to the next version, since I know it’s going to stop all productive activity for something between a few hours and a day. But this time around I had no choice, because I replaced a computer. Yes, I replaced an older (and occasionally struggling) MacMini with one of the snazzier, faster, low-profile MacMinis. Normally commissioning a new computer is cause for celebration, but this time there was a large fly in my gazpacho. That fly was OSX version 10.7, otherwise known as Lion, which came installed on the Mini and could not be rolled back to 10.6.8; the Mini won’t run on that version.

I’ve known that Lion was coming, although I successfully avoided it for as long as possible. On top of that I also knew there was a new version of Pro Tools in the offing since the announcement last October at the AES show. My strategy was to dodge that one as well. So when I commissioned that new Mini and completed the step where software is migrated from the old to the new, I was rather surprised at the results I had when I first tried to run Pro Tools.

You see, Apple’s Migration Tool refused to migrate some files that were part of my version 9.0.3 version of Pro Tools onto the Lion drive. Starting Pro Tools yielded a dialog box that explained how some files had been moved to an “Incompatible Software” folder. I was left with one button to click, and that button was labeled “Quit”. Remember, I didn’t want to move to Lion in the first place, but was forced to with the new Mini.

I did not find out until much later that I could have avoided that bad business by having updated my 9.0.3 to 9.0.5; I guess I didn’t get the memo. It turns out that 9.0.5 does run under Lion, and it also runs under Windows 7 in either 32-bit or 64-bit mode. But at the time I figured that I was screwed (and not very smart to boot). I also knew that ultimately I’d have to go to Pro Tools 10 on the new Mini, so why not now? So that is exactly what I did, and here’s what I discovered along the way. 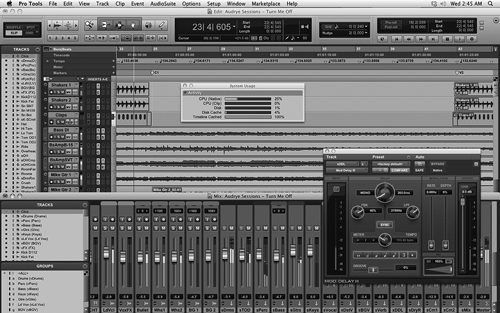 SO WHAT DOES IT REALLY NEED?

Pro Tools 10 runs on Windows 7 SP1, and on Mac OSX 10.6.7 through 10.7.4. In both cases it wants to see at least 2GB of RAM, and prefers to see 4GB. While the program itself is still 32-bits (boo!), it does run on both 32- and 64-bit versions of the above Operating Systems. It also requires an Avid interface or Avid-approved third party interface, although the list of these now includes about every current interface that is worth using.

The fact that the program is still 32-bit means it cannot use more than 4GB of system memory, although there are rumors that this may change in the next version. However, Pro Tools 10 features a re-written audio engine, which may not seem very sexy but does provide some noticeable benefits. As an example, Pro Tools 10 offers the same track counts as does version 9 at 44.1 or 48 kHz -- 96 voices, 128 tracks, and 128 aux input tracks. With the addition of the Complete Production Toolkit, the track counts are more generous than before. You now get 256 voices (up from 192), 768 tracks (up from 512), and 512 aux input tracks (up from 160).

Users of HD systems with a Core card get the same count as the CP Toolkit provides, except that the voices remain at 192 (it’s a hardware limitation). If you’re a non-HD user and get a Native card, then the voice count goes to 256 as with the CP Toolkit, and what you have is referred to as an HD Native system. We haven’t even discussed the new HDX hardware, which will replace the current HD interfaces, Core cards and whatnot, and will yield still more voices and tracks as well as a dizzying amount of potential I/O -- which is probably not very interesting to radio production folks. However, this fact is -- with the introduction of the new audio engine and the potential of 64-bit operation in the software, it’s now reached the point where “native” -- that is, software-only -- Pro Tools systems are more capable that previous-generation HD systems.