The Monday Morning Memo: Answer 13 Again – “Do It Backwards”

I was explaining to my apprentices the difference between cost-based accounting and customer-based accounting. “Cars in 1908 sold for about $2,500 apiece. Nearly 2,000 entrepreneurs became car builders between 1886 and 1908 and each of them began with the question, ‘How can I build a stronger, faster, more desirable car?’” 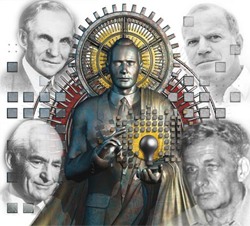 But none of them could build and sell a car for less than $2,500. Consequently, cars sold in small numbers and only to the very rich.

But Henry Ford wasn’t product-focused, he was customer-focused. Henry asked, “At what price could I sell a lot of cars… a whole lot of cars?” Henry decided upon the price of $849 and it became his non-negotiable, his North Star.

Designs A through S were impossible to build and sell for $849 so those designs were scrapped. But the Model T at $849 swept America like a prairie fire on a windy day and left 15 million Americans smiling happily in the smoke of identical, black cars. (The bestselling car in the world today sells about 400,000 units per year worldwide, so 15 million is a lot of cars… a whole lot of cars.)

Henry Ford developed the assembly line using the same sort of reverse logic. While visiting a large meat-packing house in Chicago, Henry was impressed with the efficiency of their disassembly line: a pig carcass hung from a hook that rolled along an overhead rail in front of a line of workers, each of whom cut off a piece of pork with a specialized knife. Whoosh. The pig was skeletonized in less than 2 minutes.

“Instead of a rail overhead, I’ll have a conveyor belt underneath. And instead of taking off a piece, my workers will add a piece. Instead of ending with a skeleton, we’ll begin with a skeleton.” Whoosh. By 1920 a new Model T rolled out of the factory every 60 seconds and 1 of every 2 cars on earth was a Ford Model T.

Sam Walton was Henry Ford with a different haircut. Sam taught his buyers to look at an item and ask, “At what price could I sell a lot of these… a whole lot of these?” Then if the item could be bought for less than that amount, the buyer was told to buy a trainload of them.

“Roy, I can corroborate that story.” All eyes turned toward Norm, one of my apprentices. “I was with Fred Meyer in 1980 and Wal-Mart was part of our buying group. A man at the front of the room held up a rug and began explaining its features. The Wal-Mart buyer on my right leaned across to ask the Fred Meyer buyer on my left, ‘How much do you think we could sell those for?’ My buyer whispered back, ‘We don’t yet know what they cost.’ The Wal-Mart buyer cocked his head and responded, ‘What does that have to do with anything?’”

Wal-Mart sells that much every week.

Henry Ford and Sam Walton became ecstatically wealthy because they had an instinctive understanding of Genrich Altshuller’s Answer 13: Do it backwards.

Wizard Academy graduate Kary Mullis understands Answer 13, just like Henry and Sam. “Geneticists were looking for a needle in a haystack, so I said, ‘Why not turn the haystack into needles?’” The year was 2004. Kary was telling me how he invented Polymerase Chain Reaction (PCR,) the scientific breakthrough that won him the Nobel Prize and opened the door to genetic research.

Kary then showed me a scale model of a new, organic molecule and said he was using that same inverted perspective – Answer 13 again – to eliminate bioterrorism. “We know all about this powerful immuno-reaction because we’ve been suppressing it during heart-valve transplants for decades. So I said, ‘Suppress it hell, why not aim it?’”

Kary is holding the molecule he showed me in 2004 in the 2009 TED video in which he announces the success of his experiment to make a vaccine for anthrax.

Answer 13: Do it backwards. Reverse it. Turn it upside down. Backwards thinking is what made Henry Ford and Sam Walton rich and won Kary Mullis the Nobel Prize.

Think of a limiting factor, something that’s holding you back. Now sling a little Answer 13 on the problem. What does it look like now?

After Norm finished his Fred Meyer/Wal-Mart story, each of my apprentices was tasked with studying a specific client through the lens of customer-based accounting. A second apprentice spoke up: “My client sells lighting fixtures and wants to target 30 to 50 year-old women who are in the process of building a new custom home. But why not target women who already own a home? And instead of these women having to find an installer, why don’t we send an installer home with them to install the light fixture immediately? All the lights in the showroom could have price tags showing the price of the light Installed Today.”

Anyone with half a brain can think of several reasons why this is an unworkable idea. But what do you think will happen when a person with a whole brain works out how to do it? “You Buy It Today, We Install It Today.”

The trendy thing among furniture stores right now is to let customers choose the stain for the wood and the fabric for the cushions and then deliver this quasi-custom furniture to their homes in about 10 weeks.

But my friend Jim McIngvale takes the opposite approach. Jim doesn’t do special orders. “You see it? We got it. Buy it today and it’s in your home tonight. My guys are ready to load the delivery truck and follow you home right now. No, you can’t order it in another color. That’s the color we got, right there. Do you like it?”

Henry Ford offered a similar choice on his Model T. “You can have any color you want as long as it’s black.”

Jim McIngvale is a furniture-selling legend. “Mattress Mack” sells $200 million per year in a single location, the highest volume per square foot of any furniture store in the world. His Gallery Furniture store is in Houston, his city of choice.

Like Henry and Sam and Kary, Jim McIngvale understands the power of Answer 13.

Forwards is fine but backwards is better.

November 01, 1997 12685
by Jerry Vigil How are you processing your voice tracks? Do you run your mic through a compressor/limiter and make EQ adjustments at the console? Do you also run the mic through a multi-effects box to apply a noise gate? This is...
Read More...
© 1988 - 2022 Radio And Production, LLC
Go to Top