Every fall, audio professionals from around the world make a pilgrimage to either New York or San Francisco to get their Geek on at the Audio Engineering Society Convention. This year’s festivities, marking the 133rd time one of these gatherings has taken place, were in San Francisco, which is just a bit more than a half-day’s drive from my humble abode. So I cancelled a class, faced north toward my Audio Mecca, and fired up the ‘65 Ranchero to make the pilgrimage.

The AES Convention is truly a recording-oriented affair, unlike NAMM or the NAB Radio Show or Faffcon or any other event that might cater to production types. The gear shown tends to be the best of the best, mostly suitable for high-dollar music recording studios and the sunlight-challenged denizens who inhabit them. As a result, a lot of the products are either inappropriate or just too damned expensive for VO production types like your humble servant. However, persistence pays off from time to time and this was no exception. So here are a few items that caught my eye as being useful, well-made, totally cool, and with one exception, totally affordable (my gear lust kicked in on one of them, but hey, two out of three ain’t bad). 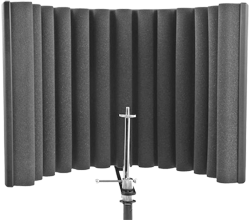 sE Electronic’s Reflexion Filters have been around for several years. I had one of the first models and, prior to having a proper space in which to record voiceovers, it served me pretty well for what it was. When my studio was finished, I sold it. Some time later I recommended the university buy a few to improve the sound quality of a space that was part of a classroom; we thought we could use it for recording voiceover and solo instruments, but that never happened for reasons that had nothing to do with sound treatment. However, the one thing I recalled from that time was that the things weren’t cheap, and we were going to have to buy several of them on a budget that was a bit thin to begin with.

Happily, sE Electronics introduced their first budget model at AES 2012. The Reflexion Filter X (or RF-X) appears to have the functionality of the original at a greatly reduced price. According to the rep in their booth, the RF-X should retail at 99 Euros which works out to just over $125 at current exchange rates. Factor in shipping from the UK where they’re made, and the US retail price could be $149 or so, resulting in a street price of just over $100. At this writing, the company says the product is available, but it hasn’t yet shown at any of the online retailers I’ve checked.

The RF-X is manufactured using most of the same materials as the earlier, more expensive models, with acoustical foam on the inside, and a three layers comprising the shell. Outside is a polymer shell with air slots, and inside that is a layer of acoustical “gray wool” which I believe is Brit-speak for fiber insulation, and an air gap which the company says is the key to the isolation. They’re rightly proud of the fact that after seven years of waiting, they have b een granted a US patent for the specific technology used in their Reflexion series filters.

The only limitation I could see relative to the more expensive models was the fact that there’s no way to tilt the clamp and filter assembly over from the vertical, but I don’t think that bothers me much. The product seems not yet available here so I haven’t had an opportunity to exercise it, but I look forward to doing so in the near future.

In any event, if the RF-X works as well as its siblings for a third the cost, then sE Electronics should be able to sell the things at a nice clip. Of course, it is not portable like Harlan Hogan’s Portabooth products are, but then again it’s a different concept. The Reflexion filters have served as a way to make a marginal space sound better, removing some of the room reflections that brand an actor’s space as “home studio” quality. If they can achieve those results in a product that costs a little over a hundred bucks, then they have a winner. We’ll see. For more information, visit www.seelectronics.com/reflexion-filter-x.

Dangerous Music carved a niche for themselves in the high-quality monitoring space with their original 2-Bus analog summing product. The short version description of this beast is that it allows engineers to sum multiple tracks from a workstation down to two analog tracks, without having to combine the multiple tracks in the digital domain. By connecting the analog direct output of each track to the 2-Bus unit, (having been converted from digital to analog within the workstation’s I/O hardware) the 2-Bus would then sum those analog tracks down to two tracks through 100% analog circuitry. Individual track levels would be controlled by the level of the direct outputs in the workstation. It therefore avoided entirely the digital mixing process with all its compromises. Recording engineers who care about sound quality, and the artists they produce, love it and have bought lots of the pricey boxes over the years. Later they offered the D-Box which both summed and controlled monitoring, but carried the high price tag of Dangerous’ other products.

This time the company has introduced another great-sounding monitoring product at a much lower price. The Dangerous Music Source is a portable single space-height unit that allows high-quality monitoring control from various and multiple sources, using some of the best digital-to-analog converters available.

Think of the Source as a combination speaker switcher and headphone distribution box on steroids, but keep in mind that there are no microphone preamps in the Source. It’s meant for monitoring only, and boy is it high-quality, flexible monitoring in a package that fits right underneath a laptop computer, and retails for less than $900. For a few shekels more you can get a kit that provides rack ears, or you can forgo that and just put the box directly under the lappy. Power is provided by a wall wart.

Why does a VO artist or radio producer need a monitoring control box, especially at this price? Okay, it is a bit of a luxury. But given the substandard monitoring conditions faced by many voice actors, particularly when on the road, the Source may be one of the smarter investments a seasoned actor can make.

First, it allows comparison monitoring over two different sets of loudspeakers (i.e., the “good” studio monitors versus the “crappy” boom box speakers). These can be played individually or together, but the best use is to check a VO audio file over each in turn. Second, the Source can take up to four separate sources, with a set of 1/8” stereo jacks (think iPod), two sets of combination XLR/quarter-phone jacks, and a USB input designed to take the mixed output of your computer’s editor and pump it out to your speakers or cans. You could also switch between listening to yourself and listening to the reference audio for a voice match. Third, it features two sets of headphone jacks so your director or agent can hear as clearly as you do.

On the road, most actors rely on the audio out jack of their computer to tell them what they’ve recorded to the hard disk. These jacks, and the circuitry surrounding them, are notoriously inaccurate and unreliable, a situation that gets worse over time with the constant plugging and unplugging to which these connectors are subject. Now picture plugging your studio headphones to the Source and hearing the sound exactly as it exists on your hard drive, warts and all, via USB. You’ll be better able to fix those warts if your monitoring system reproduces them accurately, even in a hotel room.

The only complaint I have with the Source is that the level controls are continuous rather than stepped. In a box of this caliber, I expect stepped level controls for repeatability, rather than continuous level controls, but it’s not a deal-breaker. Yes, the Source is pricey. But if you’re making a good living based in part on the quality of your recordings, it seems to me to be a wise investment to help you hear what needs fixing prior to shipping it to the client. The current price of the Source is $899, but I anticipate that to drop a bit as the product begins shipping in quantity. I know I’ll be looking for a deal on this puppy. For more information on the Dangerous Music Source, visit www.dangerousmusic.com/products/source. 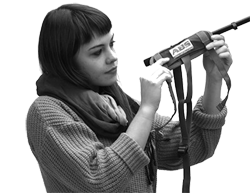 The last item that piqued my interest wasn’t even on the show floor. In fact, it wasn’t at the show at all, as far as I could tell, but given its “why didn’t I think of that?” nature, it should have been. It’s brilliant and cheap,

Legendary voice actor Harlan Hogan has come up with another doozie product, called ABS, which stands for Adjustable Boom Stop. It consists of some light gray web straps, a turnbuckle or two, and a webbed pouch. What it does is stabilize a boom on a mic stand in such a way that the boom cannot sag under the weight of an expensive microphone. By slipping the open “pouch” over the end of a boom arm on a mic stand, then using the turnbuckle to loop the strap around the leg or base of the mic stand, the boom can no longer sag, or even move upward, when a mic is attached to the boom.

It’s far easier to understand from the pictures shown here than it is from my description. Figuring out how to route and position the straps on the stand can be a puzzle the first time through, but once you’ve done it, the process will cease to be a puzzle. The turnbuckles, which are similar to the reasonably durable plastic turnbuckles on luggage, make the entire affair completely adjustable and quick to set up. Having done it, you can also mark the gray straps with a black magic marker to immortalize their position relative to the stand and the turnbuckles. And no, it doesn’t make the mic adjustment process any more difficult -- I’ve used it during game VO sessions when changing from a tall male actor to a small female actor -- but actually speeds the process. Adjusting the length over the turnbuckle is infinitely easier than loosening and tightening a knob on the boom, and it eliminates the nasty tendency for the mic to fall when you first loosen the boom knob.

With the usual stand-and-boom affair, the safety of your fragile four-figure condenser mic depends on a dime’s worth of washers and cheap pot metal, complete with threads that will soon strip and lose their grip. Given the price of a good VO mic, there is absolutely no reason not to have at least one of Hogan’s ABS units. I’ve already recommended them to several of the VO studios where I work; just stick yours in your coat pocket and show it to the engineer. He or she will get it immediately.

For more information on the ABS, Check it out on the website at www.voiceoveressentials.com. The US retail price of the ABS is $24.95, and you can get it at the aforementioned site, or on Amazon.com, for about five bucks less than that. Steve sez check it out.