Here’s one we haven’t checked on in a long time. To be precise, it’s been since May of 2008 that we’ve looked at the Samplitude product (specifically, Samplitude 10) from Magix in Germany. While the Samplitude range of multitrack software editors is seldom seen in the US, it does command a respectful market share in Germany and other parts of Europe, where it enjoys a reputation as a feature-rich recorder and editor for PCs running on Windows. As we noted back then, Samplitude is extremely flexible, highly customizable, and the new version runs in full 64-bit mode to take advantage of multicore processors and large quantities of memory.

In an effort to increase their market share in the US and elsewhere, Magix have reorganized their Samplitude line of editors in such a way that they now include two versions of their flagship Samplitude line; the “Pro X” which we’ll examine this month, is most suitable for radio promo and imaging work and is priced appropriately for radio (see below), while their “Pro X Suite” is aimed at music studios and carries a much higher price.

So why would anyone even look at a multitrack editor that was well off the beaten path? Let’s find out. 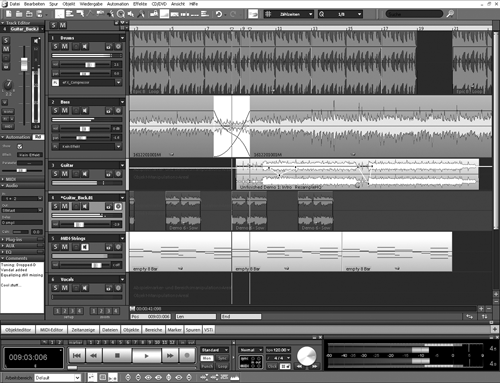 Samplitude Pro X runs on Windows 7 and Vista in either 32- or 64-bit modes, and on Win XP in 32-bit mode. It requires a CPU that runs at 1.5 GHz or better, and really thrives with a multicore processor like a Core2 or i7 (up to 8 cores total). It wants to see at least 1 GB of memory for 32-bit operation and 4 GB for 64-bit operation, although more is more, so you will want to double those amounts to really get it to sing. With memory as cheap as it is (I just bought another 8 GB for well under $50), you’ll want to add some anyway. Supported sample rates go up to 192 kHz, with bit depths including 16, 24, and 32-bit float. It will import files in formats including WAV, ACC, Broadcast WAV, MP3, CDA, OGG Vorbis, AIFF, FLAC, MOV, and AVI (audio only), and will export files as WAV, ACC, Broadcast WAV, MP3, CD-A, OGG-Vorbis, AIFF, WMA, and FLAC.

Unlike previous versions, Samplitude Pro X abandons the use of a hardware dongle. Existing users can still choose this method of authorization, but new copies of Pro X are activated using a simple Web-based procedure based on a serial number. You are allowed to activate a single licensed copy of the program on up to three machines, which is a significant benefit for those who regularly move between laptop and desktop computers. I’m especially gratified to see the end of the specific dongle used in previous versions; the CodeMeter was not only a USB pain, but deposited a couple of boot-time apps that proved difficult to remove from my systems. Good riddance.

February 01, 2010 10197
by Steve Cunningham Harlan Hogan is not just a world-renowned voice actor, with a string of credits that goes back several decades and includes brands like Raid, Heinz Catsup, and Life Cereal. He’s also a teacher of voiceover...
Read More...
© 1988 - 2022 Radio And Production, LLC
Go to Top