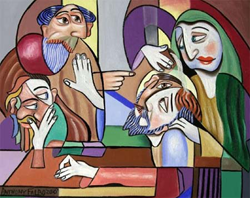 Give a person the same information you’ve given them in the past and they’ll make the same decision they’ve made in the past.

This new information can be facts and details or it can be a new angle of view:

That sentence doesn’t give us new information. You and I already know:

(2.) drug companies have to pay for their own research.

“Today’s expensive drugs pay for tomorrow’s miracle cures,” merely gives us a new perspective by linking the first piece of information to the second.

People trust what they already know. Present your customer’s own suspicions, beliefs and prejudices as “evidence” and they’ll judge your assertions to be completely credible. Even when they’re not.

That sounds a bit Machiavellian, doesn’t it? Sorry about that, but I want you to have a clear understanding of the technique used by sinister leaders to gain control over large groups of people.

Racist presidential candidate George Wallace used this technique in 1968 when he told Americans to vote for him and “send a signal to Washington.”

His seemingly innocent statement was built upon 2 assumptions:

(1.) something is wrong in Washington.

(2.) Wallace is against what’s wrong and you should be, too.

That first assumption, “Something is wrong in Washington,” is so easy to sell that the second assumption is swallowed without thinking. Wallace used a communication trick I call, “bouncing it off the invisible backboard.”

(1.) When you say a thing clearly it goes swish through the net like a basketball.

(3.) But when you bounce your idea off another idea without making specific reference to the second idea, I say you’re “bouncing it off the invisible backboard.”

“White people are superior to black people” was the invisible, racist backboard off which Wallace bounced his statement, “Send a signal to Washington.”

“She’s so fine there’s no tellin’ where the money went.”

Pennie laughed when she heard that line for the first time in Robert Palmer’s Simply Irresistible. Let’s take a look at all the buried assumptions cleverly hidden within that line:

(3.) The man with the money was accompanied by an intoxicatingly beautiful woman.

None of these things was said clearly. We intuit them, reading between the lines.

I’m convinced the invisible backboard is found in the right hemisphere of the brain. Unlike the left hemisphere, the right brain doesn’t know fact from fiction or right from wrong. The right brain is all about pattern recognition, hunches, gut feelings, intuitions and premonitions.

Speak indirectly to your customer’s hidden suspicions, beliefs and prejudices. Bounce your suggestion off an invisible backboard in the brain’s right hemisphere and you’re whispering naked, in the dark, to the heart.

September 01, 1994 2393
Sterling Tarrant, Director of Network Production, The Word In Music Satellite Network/KBIQ-FM, Colorado Springs, CO by Jerry Vigil One of the fastest changing and growing formats in our industry is the contemporary Christian...
Read More...
© 1988 - 2022 Radio And Production, LLC
Go to Top