Production 212: Slaving Over a Hot Console

I don’t know if many of you know this, but the Z100 studios are in the AT&T building in Tribeca in lower Manhattan. When we moved here from Jersey City three years ago, we all had quite a laugh over the fact that you couldn’t get decent AT&T cell service in the AT&T building. Needless to say, most of us switched over to Verizon as soon as we could. Consequently, it was only recently that I finally got my hands on my own iPhone. A couple of weeks later, I had to have an iPad2.

Obviously, I’m a MAC guy and, in fact, have been since I got my old Apple computer in the ‘80s. I’ve thought for a long time that one of my secrets to success has been my reliance on superior technology, which allows me to be as creative as I want to be without fighting with my operating system every step of the way. But… it always wasn’t that way.

Just to give you some insight, in my pre-DAW days, producing a promo was a fairly long process. Skip past the writing and tracking the VO. Jump right into the final production work. 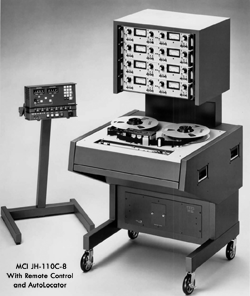 It all centered on an MCI 8-track recorder I called “The Beast.” It had a gigantic transport because it used a 10-inch reel of 2-inch wide tape, which was incredibly heavy. This meant that to start recording, I needed a couple of seconds of pre-roll to make sure it was completely up to speed by the time I started recording whatever I wanted to add to the mix. I almost always started with music, so I’d let the tape roll for a few seconds and start playing the CD or vinyl record I wanted to use. Then, I would “safe” those channels and “ready” the next pair – back the tape up and start the roll to the first edit point. When I heard the point at which the next bit of music would start, I’d start the music. I had to get it right on the beat because once it was committed to tape, that’s where it would forever be. I couldn’t slide the audio around to get it right. If I got it wrong, I’d have to back the tape up and start over. This would continue as I checkerboarded the tracks 1&2 and 3&4, back and forth to the end.

Bear in mind that on an 8-track recorder, you can’t see the waveforms. You have to hear it and know that its right before you can move on. Nor can you splice 2-inch tape. Because the head surface was so large (2 inches across) physical cutting and splicing would create a pop on at least one channel, more likely all 8 tracks, no matter how exacting the cut and splice was. Besides, it would ruin the tape for future use. As I’m sure you can tell already, just laying down the working music track would generally take 40 minutes to an hour, depending how precise you wanted it to be.

Next came the VO. Adding VO to the promo was, by necessity, a two-stage process. First, I would need to select the takes I wanted to use. I could do this on the fly, but after making a couple of little errors and having it play out to the end, I quickly discovered that I was better off removing the out-takes first. So, out came the grease pencil and razor blade. I would physically remove the offending takes and end up with a VO reel that had exactly the phrasing and words I wanted to use. Then I’d fire up “the Beast” and start laying the VO in over the music tracks.

My last step prior to executing the mix was usually adding electronic and natural sound effects. If the placement of the VO depended on when a certain sound effect would hit, I would add that to the music tracks first. Either way, I depended on the electronic and natural sound effects to help me emphasize music and vocal hits. Even in those days, this was always true. Some used (and some STILL use) effects to frame their work, but I’ve always felt that was putting the cart before the horse, and you’re much more likely to lose the message. The words and sometimes the music are far more important.

The final step is the actual mix. In many ways, this is where the rubber meets the road, as they say. If the mix was anything but perfect, it would pretty much make the entire project miss the mark. So, I would have to basically practice the mix over and over again until I had it precisely right before I would commit it to cart. (Running your broadcast from a computer was unheard of in those days.) Only the most expensive recording company consoles had moving faders, so it was a manual job, all the way. By the time I was done, I usually had heard the promo’s various workparts hundreds of times just during that session.

Total time, from beginning to end, with writing and VO tracking would often exceed four hours. Some very complicated promos with multiple updates would chew up an entire day. And the worst part was, to help shave a little time off the process I would look for and use several little shortcuts. Those shortcuts almost always resulted in compromises. My refrain would always be, “Well, if I had more time I would have made that musical phrase shorter,” or “I would’ve gone back to the original VO and pulled an alternate line.” The digital age changed everything.

The first computer based recording and editing program I ever had ran on a UNIX system. It was wildly expensive ($130k for a basic setup), and yet, it was still pretty complicated, but what did I know? New England Digital™ started something that revolutionized the way we do what we do. It was just a few months after I got started on NED that Adam Curry (the tall, blond, Dutch-born American VJ from MTV) turned me on to a little company called digidesign™. They had three programs called Soundtools, DECK and EDIT that could do on a MAC what I was doing with NED for a fraction of the cost.

Eventually, DECK and EDIT morphed into a single program called Pro Tools™, which ended the need for Soundtools (a program that allowed you to add compression, EQ and the like.) As Pro Tools™ grew in size and scope, the complexity of radio production shrank. Now, I typically finish a promo in 20 minutes or less and there are NO compromises. Every promo can be perfect. Ain’t technology wonderful?

So the next time you’re feeling put upon because the PD needs you to crank out “one more” before you go home, get out your iPhone or iPad and tap out an “OK” message with a big smiley face emoticon and send it through the ether. Let this remind you that the extra 15 or 20 minutes you spend slaving over your hot console, would have been a lot longer once upon a time. You might not have gotten home until after the big game on television that night.

I really wish I had some examples of what my production sounded like on “the Beast,” but every bit of that era’s production at Z100 has been donated to the Museum of Radio and Television here in New York. Up to my last visit there, they had not done a Z100 history section, but I am forever hopeful that one day they will. Now that would be quite the legacy.

What I can do though is offer a promo that I know would have taken six to eight hours to produce in “the Dark Ages” before digital. Instead, it literally took me 14 minutes to write, voice and produce, a short bit of production time, even for me. The cast of FOX-TV’s hit series Glee is on tour, performing the songs they’ve done on the show, and we were fortunate enough to get a big stack of tickets for a weekend promotion. I think most of the 14 minutes was taken downloading the music. MAN, those slave drivers.