As I write this it’s early June, which means I am not teaching at the university, and I am waiting for a dialog recording gig to start in a couple of weeks. So this month we won’t be diving headlong into some deep recording software or comprehensive suite of plug-in processors. Instead we’ll take a look at some fun, inexpensive (but useful) iGoodies for doing our jobs. We’re talking widgets that will let you record and edit, after a fashion, on your iPod Touch, iPhone or especially your iPad.

Collecting and working with these goodies has been great fun for the past several weeks, but take heed: These are all consumer products that act as peripherals to other consumer products (mp3 players, cell phones, and tablet computers), so the versions and compatibility lists change greatly and often as we will see.

Wait, you don’t have an iPad? Don’t feel bad; the only reason I do is that my wife got an iPad 2 which I am permitted to touch every now and then. Yeah, you know how that goes... she always gets the cool stuff. Naturally I decided to check out the audio capabilities of the thing. She’s just lucky I haven’t taken it apart. Yet. 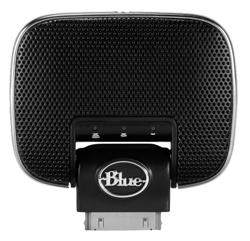 MIC UP YOUR GIZMO

While the built-in microphones provided with most of the devices are okay, the advantages of external microphones are too compelling to ignore. In the October 2009 issue of RAP, we took a look at Blue Microphones’s Mikey, a slick little stereo electret condenser that connects to the bottom of a then-current iPod, iPod Touch or iPhone. We noted in that review that making that connection unlocked the Voice Memo functionality of the iGizmo (we were using a 5th generation iPod back then), and allowed recording WAV files at 16 bits and 44.1kHz. It worked well; I recorded several interviews and even did a remote VO audition with that little rig.

Unfortunately that first version of Mikey doesn’t work with the iPhone 3GS (which emerged in June 2009) or with the more recent iPhone 4. Nor does it work on my 2nd generation iPod Touch, or the 3rd generation. So in the summer of 2010, Blue released their second generation Mikey, which does work with the iPhone 3 and 3GS, and with nearly all recent versions of the iPod and iPod Touch. Blue reworked the capsule, resulting in noticeably better frequency response than with the previous version, and even added a mini-USB connector and a mini-stereo input for recording audio sources other than Mikey itself. I retired the earlier Mikey and took up with Mikey 2G using the same iPod Classic as before. Brilliant.

But Mikey 2G doesn’t work with iPhone 4; Apple changed the connector on the iPhone 4 so there’s no analog input available. There’s also no analog signal path into either of the iPads, shutting Mikey out of those as well. This was not the first time Blue got the short end of someone else’s stick -- in 2009 they released a microphone for the popular Flip video camera. Flip had just been acquired by router manufacturer Cisco, who struggled with marketing the product for two years before shutting down the entire Flip division last April. Are you seeing a pattern here?

So the bottom line with Blue’s Mikey 2G is that it’s great with iPods, the iPod Touch 1G to 3G, and with iPhones up to and including the 3GS. Mikey 2G retails for $99, up twenty bucks from the previous version, but available on the street for less (at this writing, Amazon has it at a hefty discount, and I do mean hefty). Mikey 2G is not quite studio quality, but is still well worth it for remote use assuming you have an iGizmo with which it will work. So where does that leave us for mics on the latest Apple gizmos, especially the iPad? Why, with USB of course.

June 01, 2008 5931
by Steve Cunningham We last reviewed Magix’s Samplitude software editor three years ago (see RAP May 2005). Since then the program has undergone two significant upgrades, each adding more functions to what was already a strong...
Read More...
© 1988 - 2022 Radio And Production, LLC
Go to Top