The Monday Morning Memo: How Do You Want to Feel Right Now?

We’ve invented a machine that lets you select your mood. This astounding device can be adjusted to make you feel however you’d like to feel. It’s called a radio. 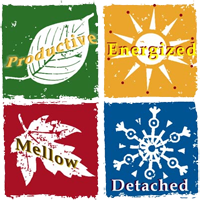 The distinct advantage of humans is our ability to attach complex meanings to sound. The most important sounds are called words.

NOTE: The written word has no meaning until it has been translated into the spoken word it represents. How many times have you been lying in bed reading a book when it occurs to you that your eyes have been scanning the same paragraph over and over, but you still have no idea what it says? Falling asleep, your eyes continue to take in the written words, but the visual symbols are no longer being translated into their corresponding sounds. Consequently, no comprehension.

Pitch, key, tempo, rhythm, contour and interval are elements of music, another language of sound, to which we attach complex meanings.

Not even a chimpanzee can clap in rhythm to music. Conscious rhythm is uniquely human, a function of Broca’s area. It makes sense, doesn’t it? That same region of the brain that coordinates diaphragm, larynx, lips and tongue so that we can articulate stored sounds called “words,” also coordinates the muscles that allow us to clap, tap, and dance to a rhythm. Animals can’t clap in rhythm for the same reason they can’t talk. No Broca’s area.

Imagine an auditorium of chimpanzees clapping in unison to Elton John’s Bennie and the Jets. Pretty scary, huh?

In all its variations – iPod, CD player, etc. – a radio is a mood selection device, a delivery system for the complex sounds that so greatly alter our mood. How do you want to feel right now? Just press the button.

Faint traces of music drift
To my ears in the lonely night
Words barely audible yet familiar
A little too familiar this time
Taking me back to times and places
I never knew I had left behind.
Intending to turn the radio off
I only manage to increase the volume
Hoping you will somehow hear
And miraculously return
To sing each broken phrase with me

These opening lines of Memory Radio by Jenny Leigh were written in non-rhyming meter, also known as free verse. Meter is achieved when words are arranged so that a predictable rhythm is created in their pattern of stressed and unstressed syllables.

Iambic meter is soft/hard (x /): “That time of year thou mayst in me behold”

Trochaic meter is hard/soft (/ x): “Tell me not in mournful numbers”

Anapestic meter is soft-soft/hard (x x /): “And the sound of a voice that is still”

Dactylic meter is hard/soft-soft (/ x x): “This is the forest primeval, the murmuring pines and the hemlock”

Think of stressed and unstressed syllables as hard and soft drumbeats. Use meter to weave a musical rhythm into your message and it will, like a song hook, get stuck in the phonological loop of working memory in the dorsolateral prefrontal association area of the listener’s brain. Additionally, you’ll have moved your message from the suspicious left hemisphere - the half of the brain that interprets words - into the open-for-anything right hemisphere responsible for interpreting music.

The right hemisphere of the brain isn’t suspicious. In fact, it doesn’t know right from wrong, true from false, or reality from fantasy. Hmm. This could be useful...

One last thing: I’ve always wanted to see a billboard featuring the giant buttons of a car radio. Above those buttons are the words, “How Do You Want” and below the buttons, “To Feel Right Now?”

I’m betting it would cause millions of drivers to turn on their radios.

But what do I know?

June 01, 2013 5024
by Steve Cunningham After a few issues wherein we’ve dealt with various forms of Internet esoterica, this month we’ll get back to the basics of assembling a serviceable audio editing station. Our specific goal this month is to...
Read More...
© 1988 - 2022 Radio And Production, LLC
Go to Top