Another powerful feature that helps with organization in Nuendo 5 is a new type of container for audio events, called a Clip Package. Imagine you’re layering a number of audio events on different tracks to create a composite sound that you will want to use again in the same or another Project. Steinberg suggest the example of a sound editor who might need to layer a number of different sounds to create a single effect (gunshots, snow falling, or whatnot), although there are obviously many musical uses for layering as well. You could group the events, but there’s no easy way to reference a conventional group, find it again, or use it in other Projects. Instead, you can now export these events as a Clip Package.

A Clip Package is a single file that’s created to store the chosen audio events, along with the their positions relative to each other in terms of time and track location. By default, Clip Packages are stored in your Project’s Clip Packages folder, although you can choose another location if you wish. When you want to re-use a Clip Package, you can look in the Pool, which lists the Clip Packages used in a given Project, or you can use the Media Bay. This allows you to search and browse for all indexed Clip Packages on your system, and when you find the one you want to use, you can drag it onto the Project window. Nuendo will reassemble the audio Events relative to the mouse cursor and on the appropriate tracks, creating additional tracks where necessary. Best of all, the newly created audio events from the Clip Package will be remain grouped as was the original.

Again, Clip Packages is a feature that has been in place in Pro Tools since version 8. In PT you can select any type of event on one or multiple tracks and group them together into a package that will remain grouped through export and import, and which can actually be looped as a complete unit. The point is that Clip Packages is not a revolutionary concept, but it is one that Nuendo deserves to have. It also proves one of the maxims of recording software developers in general, which states that “talent borrows, genius steals.” 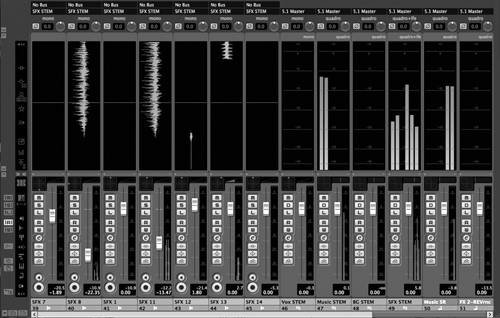 Nuendo’s mixer has always included a Control Room section that mimics the center section of an analog console; perhaps that’s why those of us who’ve worked with analog feel comfortable with Nuendo. Version 5 adds Monitor Sources to the program’s Control Room window, which replaces the previous External Inputs functionality. Previously you could use the External Inputs to route and monitor up to six hardware inputs in the Control Room, which was great for incorporating CD players and other audio devices into your studio system. The new Monitor Sources feature builds on this idea and enables you to create a maximum of seven different Monitor Sources from inputs, groups, or outputs — in addition to the main output.

But for all-around feature flash and pizzazz, nothing beats the new Wave Meter. This new extended view presents a scrolling, summed waveform of the audio playing back on a given channel instead of the customary LED-style level meters. However, the Wave Meter display only works for audio tracks where the audio data is being read from disk. Nothing will be displayed if a signal is being generated by a plug-in on the track, and the Wave Meter display is unavailable for channels of other track types. I’m not sure about Wave Meter’s benefit for mixing, but it would certainly make life easier for editing, particularly for cueing purposes while scrubbing.

Nuendo has always come packaged with a complete plug-in suite and a mixer with highly useful EQ on every channel. Nuendo 5 adds a few new, high-quality plug-ins in the company’s VST3 format. Most impressive is the new convolution reverb called REVerence. Its presets have all the expected IRs, including Halls, Rooms, Small Rooms and Plates. You can also import your favorite IRs and use them with this interface. Another new plug called Pitch Driver is a harmony processor with a width control, of course there’s an Auto-Tune clone called Pitch Correct. The latter has an additional Formant function that automatically maintains the size of the vocal cavity through a pitch change, or can be manually exaggerated to make an actor sound older, younger, more male or female, or just weird.

The most interesting of these new plugs is VariAudio, which allows for pitch change on the order of Celemony’s Melodyne, and can create some very strange effects on a voiceover track. You first double-click on the region you want to effect, then click on the Pitch & Warp tab under VariAudio. Nuendo will then analyze the pitch of the audio. Each phrase can then be highlighted and adjusted with two variable sliders, one for quantizing the pitch and the other for straightening. A judicious amount of either or both can alter the pitch in ways a standard pitch shift plug cannot. Since VariAudio is part of the program, the effect can be auditioned solo or within the mix.

According to the company, Nuendo 5 is more than just a new version -- it is a completely new build of the product with a re-written video engine (another nod to post production) and a mixer that is more CPU-efficient than previous versions. While Nuendo’s base requirements are reasonable, it’s been my experience that previous versions needed a lot more CPU than I had available. While I really liked working in versions 2 and 3, I had to give up on version 3 for projects with a high track-count, as none of my computers could play projects that played back fine in version 2. Version 5 seems more efficient, and my current machines, which tend to be Core 2 Duos with about 4 GB of RAM, don’t appear to be working so hard with moderate plug use. As always, more is more where processing speed and memory are concerned, and YMMV (your mileage may vary).

Working on a couple of projects using Nuendo again reminded me how much I have enjoyed past versions of this software. It will do nearly everything you ask of it, and do it quickly. Of course the ultimate Nuendo rig would include a controller, and once you get used to the darker-than-necessary theme you’ll like it. There’s a lot here to like, but there’s also a vast quantity of functionality that production pros will probably never use. I wish there was a version of Nuendo that was suitably priced for radio and voice over production. There is, but it’s called Cubase and unfortunately it is geared primarily at the music market and not for cutting sound quickly.

If you already own Nuendo, then upgrading to version 5 is inexpensive and worthwhile. A new user might have to think long and hard before committing to such a pricey package, unless he or she is looking for additional income from post or dialog work. If you can figure a way to make it pay for itself, it’s a worthy alternative to Pro Tools or other high-end recorder/editors.

January 01, 2009 8038
by Steve Cunningham Having recently checked in with two of our favorite Sony products, Vegas 8 and SoundForge 9, I thought it time that we check in on Sony’s Acid product, which has recently arrived at version 7. A percent-off...
Read More...
© 1988 - 2022 Radio And Production, LLC
Go to Top