Zen and the Art of Staring at a Blank Screen 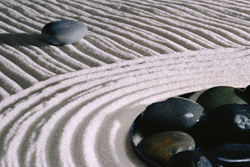 It was the fifth shot that I’d sent soaring out into the rough, near the huge nets that were set up on both sides of the driving range. I had been asked by my new golf instructor to simply take a few swings, so that he might observe some rudimentary things about his new pupil. However, I was not making a very favorable impression on my teacher. If I didn’t dribble a few off the toe of my 9-iron, then I was consistently sending balls over towards the net on the right, cascading shots that resembled the arc of a boomerang, except the only way the balls were returning is if that guy in the pro-shop jumped in that caged-vehicle and retrieved them later in the afternoon. I was embarrassed.

“You know, I think it’s these clubs,” I said, wiping the perspiration from my forehead. “Golf magazine just had an article about this last month. You think fitted clubs might be part of the solution?”

He had been smoking while watching me, but then stood up, tossing his cigarette off to the side. “Let me see that club.” Flicking a ball from the pile that had rolled out of the wire-bucket on the ground to his right, he gazed down the middle of the fairway, lined the ball up just to the right of his left in-step, took a three-quarter backswing, and released into that range-ball with one of the most effortless, mechanically pristine swings I had ever witnessed in person, projecting that white pimply-ball directly down the middle of that fairway, well-beyond several of the distance-markers, where it bounced a few times before coming to rest a bit short of the giant white numbers that read “200”. He coughed, walked towards me, handed me the club, sat down, and lit another cigarette. “There’s nothing wrong with that club.”

I thought of that episode earlier today. (Hearkening back to previous experiences that involve sunshine, humidity, and azure skies is a cheap and sometimes-effective remedy to appease the soul when what appears on the other side of my window consists of frigid temperatures and a rain-snow mix.) I was involved in a Facebook thread that eventually matriculated into an opinionated, and sometimes verging on volatile, discussion. It was the old “Mac vs. PC” war. And, of course, when the war has production or voiceover people as its combatants, the battle generally rolls on over the border towards “Pro Tools vs. Audition” and “Vegas vs. Logic” and so on.

Sure, we all have our preferences. Sometimes that preference is forced upon us, and sometimes we come across it by accident. When I was the Creative Services Director for Clear Channel’s AM stations in Washington, DC, I started using Audicy, because that’s what was in the building. Only until one of the Audicy machines expired did I switch over to Cool Edit Pro, and that’s only because I was the low man on the totem-pole and my production-counterpart preferred the Orban. By the time I had arrived at KDKA several years later, I was desperately in love with Adobe… until I discovered after accepting the position that the entire building only used Sony products, and I was forced to switch over to Vegas! I use it to this day.

I’m not the most technically-gifted producer. I’m also not the most talented golfer. In fact, I suck at golf. But I know enough about the production studio to be able to construct an air-worthy promo, a similar amount of ability that enables me to not completely embarrass myself at a golf outing. My contention during the simmering escalation on Facebook, though, is that the feud really shouldn’t be about Mac vs. PC, or Oxford plug-ins vs. those designed by Chris Lord-Alge. I’ve worked with guys who could write a Ph.D. dissertation on Audio Spectrum Analysis but who couldn’t choose a suitable :60 music bed for a restaurant spot. I’ve also played golf with guys who could blast a tee shot 320 yards but who couldn’t break 100 because the putter was considered a foreign object. In fact, there shouldn’t be a feud at all. That elusive “something” that has plagued me since that day on the driving range and that has yet to be discovered, by contrast, has manifested itself within my chosen profession. It has very little to do with equalization or compression or polar patterns and has everything to do with thinking and “hunting and pecking” and deleting… and probably thinking some more. I’m talking about the word processor.

It’s the most basic of promo and imaging construction, the DNA of the well-done commercial. It doesn’t care whether it’s done on a Mac or PC, and whether or not its building-blocks get run through a Waves C1 Compressor or Ableton Live is miles down the road. Yet, it’s the crux of what we do, and is oftentimes treated like the red-headed stepchild. I have the satisfying opportunity to work with dozens of stations; however, the imaging pieces and commercial copy that really place the written word at the top of the food chain really don’t float into my email in-box with a great deal of regularity. There are exceptions. Jeff Cecil, for instance, who is the PD at KDZZ-FM in Rochester, Minnesota, is a terrific writer of imaging pieces and promos. He’s fun, funny, and clever, with enough tongue-in-cheek snarl to let you know that you’re still listening to a rock station. I even look forward to his Facebook posts. But, sadly, most “writing” is an afterthought, a .doc file generally accompanying a hastily written email with words such as, “Dude, can u reel these off ASAP? They need to air during the morning show. Thnx.”

When I first became interested in making the progression from “jock” to “prod guy,” I came across a cassette tape, a compilation of various imaging pieces and commercials. It changed my life. That was when I was first introduced to people like Joel Moss, Ann DeWig, and Ned Spindle. Sure, they’re technically-gifted producers, but the tool in their arsenal that most intrigued me was the typewriter. The soul of the work I heard stretched far beyond beat-mixing or choosing the appropriate DAW. I hoped in some way that I could later emulate them. I still do.

The same can be said for voiceover. The forums are filled with voice artists who fill their day praising this preamp or lamenting that compressor, at the same time hoping and praying that they’ll one day discover a vintage Telefunken tube microphone tucked away behind a knee wall in the attic. Yet, as Beau Weaver remarked during a recent webinar, the “real” world of voiceover has very little to do with preamps or compressors. Yes, they have their place, but the proof-in-the-pudding lies on that piece of paper you’re holding while you’re standing in front of that Telefunken microphone. If you can’t give the words a soul, the most expensive Brauner microphone isn’t going to do it for you.

That makes it sound as if I don’t appreciate gear. I do. I love my Sennheiser 416 and my Avedis preamp, and yet I, like many, are also, so it seems, continually on the quest to find the holy grail of microphone chains. And I certainly admire and look up to those who have devoted their careers towards showing others in our business how to be more adept with the software and the audio technology at our disposal. But I think many of them would admit that the essence of the creative process rarely starts with a pair of monitors or a MIDI controller. It’s something in the gut, a kind of Zen satori that sometimes defies description… and once on paper, then, perhaps, the huge array of audio resources at our disposal helps to shape and form it into what we intended it to be. Those who recorded with the legendary producer, Bob Johnston, who has worked on epic albums like Blonde on Blonde from Bob Dylan and Songs of Love and Hate from Leonard Cohen, comment on his ability to help artists feel something beyond the technical side of the process. Once, when asked what type of microphone he wanted to use for a particular vocal, he responded, “Do you have any big ones?”

Love to write! Create time for it! Close the door and shut out the world. Spend time poring over the written word the same as you would painstakingly adjust the EQ on a vocal so that it jumps out of the mix. Don’t be afraid to invest time in thinking about what it is you want to write, even if nothing gets put down on paper. An account executive in Knoxville once nicknamed me “Leo Mazzone” because, like the Braves former pitching coach, I have a tendency, when sitting and staring at my screen, to rock back and forth, until something of note finally gets splattered on to it. I shared this with the market manager in Pittsburgh during my interview process, when the position of Creative Services Director was being formulated for KDKA. He asked, “Can you take me through your typical day?” I replied that I spend at least twenty-five per-cent of my day sitting in front of the computer, staring at the screen, rocking back and forth, and waiting for words to emerge. He looked at me like I’d just answered him in Slovenian. But, as I explained, unless they come from a Program Director, the words have to come from somewhere!

The grip. The takeaway. Shifting weight on the downswing. Following through. The nicotine-stained hands of my golf instructor were proof positive that these core elements have little to do with whether your bag contains titanium or persimmon woods. He doesn’t do it very often anymore, but watch Nick Faldo when he plays. Almost after every swing, after his either terrific, or terrifically errant shot has already landed, he stands there, taking a slow practice swing, re-tracing the movement of that shot to see if he can detect if anything went awry with those very basic fundamentals.

I haven’t figured out the great game of golf, and, in particular, why my shots continue to soar off to the right into the next county. And I certainly haven’t figured out all of the technical artistry needed to become a more proficient producer. I’ll keep reading Radio and Production like everyone else for that. But I have had an “A-ha” experience, and it’s presented itself in the form of nouns, verbs, and adjectives. Before you slice, compress, buss, and mix, do some hunting and pecking, copy/pasting and deleting. Enlightenment, via staring at an empty screen while rocking back and forth. It’s time well-spent.