For me, buying another pair of headphones has always been something of a non-event. I buy headphones and blue jeans the same way -- out of habit. I’ve found a brand and style of jeans that I like; they look good, don’t fall apart, and are comfortable. When I need another pair I buy the same thing. So when the last pair of longstanding favorite AKG K-240 headphones (the regular 240 model, not the “Studio” or “MKII” versions) finally gave up the ghost, it was time to go shopping. This month I’ll tell you what I found.

Considering that I’ve been listening to the same model of headphones for the past 25 years, I sought the help of a friend who works at a Famous Music Store to get a few current models to evaluate. These cans are all marketed as studio phones, and do not come with a celebrity endorsement. I have listened to some of the recent crop of celebrity-endorsed headphones -- they were uniformly bad with sloppy, overhyped bass -- which I find not suitable for production work. Of those I tried, the most interesting were the beyerdynamic DT 1350 Professional Headphones, the Ultrasone Pro 750s, and Shure’s SRH940. Here’s how they stack up. 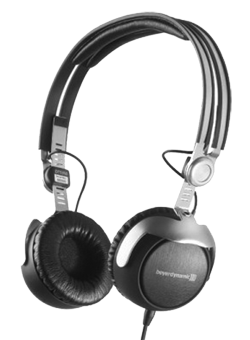 I’ve never owned a pair of Beyerdynamic cans, and can’t recall the last time I used a pair in a voiceover studio. Nevertheless, the company has been a legitimate competitor to Sennheiser and others for a very long time.

In 2009, beyerdynamic (yes, that’s the way they like their corporate name printed) introduced their so-called Tesla sound transducers, which utilize a metal-cased ring in place of the traditional neodymium magnet to distribute audio energy throughout a membrane positioned “to minimize disruptive vibrations”, whatever that means. They used this technology in their DT 1350 headphones, a portable closed-back model designed for studio use.

The closed-back DT 1350s are “supra-aural” meaning the ear cups sit on the ear, rather than enclosing the ear. The dual head bands hold the phones more aggressively than you might expect, especially when you separate the two bands, which aids in isolation. Two brushed-metal cups swivel for comfort and flexibility, although they do not fold up for travel. They are capable of sufficiently high volume (109 SPL nominal/129 SPL max) for use even in noisy environments (thanks, I’ll keep mine well below those limits, even if they are good at blocking out external noises). Their rated frequency response is from 5 - 30,000 Hz and with an impedance of 80 ohms they can handle a beefy power amplifier.

These are not bass-heavy headphones, which is not to say they lack bass. They do have less than my AKGs, but their low bass is tight and controlled, like acoustic suspension speakers, and I rather liked that. Actually I was pleasantly surprised with the sound quality all around, especially with the midrange which is highly detailed, although it can become a bit too forward with some guitar-oriented material, but it’s very good for voice tracks, and the transient response on these cans are quick. Rhythmic elements like snares are crisp and quick.

Overall the DT 1350s are well suited for tracking and for mixing. While they are quite full-ranged, the midrange detail reminds me of my beloved Yamaha NS-10s, which have never lied to me about this critical area of response. My only quibble with these is the supra-aural design that sits on my ears. The pads are soft and comfortable enough, but I’m just not used to wearing headphones that sit like the DT 1350s do. I suspect I’d get used to them after a while, and they are the lightest phones of the three evaluated here at just under six ounces. In any case, their sound made them hard to give back.

The DT 1350s carry a suggested US retail price of $379.00, but can commonly be found on the street for less than $300, sometimes much less. For more info visit www.beyerdynamic.com.

June 01, 2002 6798
by Steve Cunningham The venerable VoxPro editor has been around for several years now. Heck, it pre-dates consolidation, and the last time it was reviewed in these pages most DJs still worked live shifts. Much has changed since...
Read More...
© 1988 - 2022 Radio And Production, LLC
Go to Top