Q It Up: What’s New in Your Toolbox? 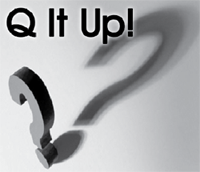 Some great responses to this month’s Q It Up question! Thanks, guys!

For me, the new tool I found quite handy this past year is the RM3 digital rack mounted recorder from iKEY Audio. This sleek single rack unit recorder has a street price of $199 and records to SD cards or your favorite USB storage device. You can select between MP3 and WAV formats with MP3 formats up to 320kbps and WAV at 16-bit 44.1kHz. Sure, you can do this on your computer with Audition or Sound Forge, but what is sweet about having the RM3 in your rack is the fact that you can free up your computer to do other tasks while recording to the RM3, great when that something you need to record is lengthy, like TV audio or a feed from a remote broadcast, etc.

Q It Up: What new piece of gear or software did you stumble across this past year that you find useful with your work? A new plug-in perhaps, or a way cool phone app? Maybe some actual outboard gear? You know, that stuff in the rack that uses wires! Tell us about it, what you like about it and how it has helped you work better

Chuck Matthews <cmatthews[at]rcrg.net> Rubber City Radio Group, Akron, Ohio: I love love love my Avalon M5 pre amp. Far and away the best in class at its price point for a solid state pre. Additionally, I bought a Sennheiser 415T (T-powered) that my buddy Jeff Laurence recommended. I use the Avalon/415T at home. At work the 416 with an old Symetrix 528. New plug that I cannot do without is the SSL Compressor.

Richard Stroobant <richard.stroobant[at]sait.ca>: My fav new tool is an app called Twisted Wave. Very cool editor, imports from Dropbox, AND shows VU levels on the side (with numbers), the first & only one with large enough VU meters to monitor levels.

Johnny George <jg[at]johnnygeorge.com> Johnny George Communications Inc.: Regarding the studio specifically, I have re-set my Bock audio FAT switch ON and also the low cut boost that has given me some more low-end to add to my mid-range voice. Additionally, I’m going to be testing the APHEX Channel pre-amp soon to see if that would help round out my mic quality and deliver more fullness. It’s an awesome piece of outboard gear and would be the only outboard stuff I use, since I utilize my plug-ins when needed.

Even though it does not directly relate to my studio, my purchase of a new Blu Ray player has been my best purchase recently. I got the Sony BDP S480 recently. The quality of the audio has doubled and the video quality of 1080p w/ 3D capability is so vivid. I previously had a Panasonic DVD/Blu-Ray player I purchased about 3 years ago and it was a nice improvement, however, this Sony Full HD 1080p made all the difference in the world. Through it I also have access to Netflix, Hulu Plus, Vudu, Pandora, YouTube, CinemaNow, Qriocity Crackle and about a dozen more services. Many are free. Some are monthly membership fees, etc.

My system consists of a 61” HD projection big screen that I most likely will replace in a few years with a 65” or better Samsung. Trouble is, technology is moving faster than we are, and I most likely will purchase the largest screen with the most bells & whistles using the best screen resolution with whatever technology is regarded as the finest (i.e. plasma, LED, etc.).

Erik Cudd <erikcudd[at]hotmail.com> Fort Irwin, California: I had been investigating setting up a home studio for myself and I kept getting stuck with the mic chain. Do I need a mixer, how many channels, what brand, what about preamps?

Through my investigation I found a simple and VERY affordable home studio that I even take with me when I travel. First, Harlan Hogan helped create what is called a “Porta Booth Pro”. This foam padded square is amazing, I place my mic inside and I sound like I am in a soundproof studio. Secondly, I was dumbfounded about mics, but found that the MXL VO-1A was perfect, very straight forward and sounds great! Then I discovered the “Mic Port Pro” from Centrance. This allows me to not only power my mic, but it is USB capable straight into my laptop. With Adobe Audition 3.0 already installed on my laptop, I can record even in a tile room with no pictures on the wall, very loud and reflective, and it sounds like I am in the Production Room of a Radio Station. Easy, Mobile, Inexpensive, and sounds great! Can’t beat that, and I can carry it on a plane! :-) 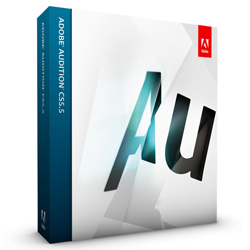 Ian Fish <Ian.Fish[at]thisisglobal.com>: I have just gone through an incredible change and discovered a WHOLE NEW bit of toolbox. Having been on Pro Tools HD for years, the PC it lived on finally gave up. Nothing wrong with Pro Tools, it was just the PC that died. This forced me to go for a quick alternative to stay on top of everything that needed doing. Having just upgraded to Adobe Production Premium CS5.5 for all my video work with my own company (www.soundsfishy.co.uk) I broke out Adobe Audition which comes included with the bundle.

Now, having only ever seen the old versions of Cool Edit and Audition, I wasn’t hoping for much… but WOW. Version 5.5 does almost everything Pro Tools did… and much, much faster. After a day learning the new system, I was flying through promos, adding track effects to mixer channels, and clip effects, and bouncing out in faster than real time! I now love the new Audition so much, I am not going back to Pro Tools, and I am part of the pre-release tester for the new version (CS6), which really does do EVERYTHING.

Forced into a big change and a whole new toy for the toolbox. I’m so happy that old PC died on me.

Alan Peterson <apeterson[at]radioamerica.org> Radio America Network, Washington DC: I’m not using it yet, but I saw it at the AES show in NYC and I want it: “Capstan” by Celemony (www.celemony.com). It is software that removes wow and flutter from recordings. Years ago at WHMP-FM Northampton Mass., the production room tape recorder I used was a dying Magnecorder with what may as well have had a square idler wheel mounted to it. This software finally allows me a way to clean up some of my favorite comedy bits and airchecks from the ‘80s. 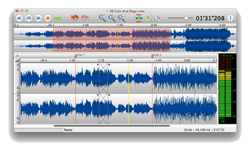 Brian Wilson <wizman440[at]hotmail.com> Cumulus Media Networks, Dallas, Texas: My favorite software for the past year has been Dropbox (www.dropbox.com), a program that allows me to drag a finished project into the “dropbox”, go to another machine in the building or one at home, open dropbox, and there it is on that computer - just drag it on to my desktop. I can put audio and video files that are way too big for the company email in Dropbox and email the links to them. The recipient saves the file to their computer from the link, even if they don’t have Dropbox. I find it easier than using a flash drive to walk files over to another machine, and the best part: It’s free for 2 gigs of storage, $10 a month for 50 gigs.

Matt Anthony <matt[at]mattanthony.com> Matt Anthony Multi-Media, Inc.: The newest toy for the Pro Tools/laptop rig that I use is a plug-in from Metric Halo called “Channel Strip”. (Thanks for the suggestion, Adam Schneider!) It’s been a fun thing to toy with, both for voiceover and for production. I’ve owned other plugs that “look” better than it, but it’s really, really versatile!

We did pick up some new production music.

And we got one of those Android phones, but we can’t use it for transacting any kind of texts, e-mails, audio, or documents given Google’s EULA. Only phone calls at this point.

We’re not going to have diddly for cap-ex tax deductions next year!

Jay Rose <jay[at]dplay.com> www.dplay.com: I’ve been loving CaptureIt (http://deepit.ru), a $30 utility for Mac. It can grab high res audio and/or video of anything on your screen: demos and tutorials, spots from a client’s website, YouTube videos, competing stations’ web streams... anything that can be shown or heard on your computer.

When it’s rolling, it seems totally transparent to the computer. Other programs don’t even know it’s there.

The program lets you choose the full screen, any window, or any arbitrary area. It lets you pause during recording. After you’ve finished a recording, it can compress or convert it to any file format, in the background.

It does take a little getting used to, since its controls float instead of being in a menu bar. And since it records in full res, you need to give it some room to work. But disk space is cheap...

Dennis Mattern <production.pa[at]verstandig.com>: Strange as this may seem… cables for the reel-to-reel. Every once in a while, you just want to revisit that sound. 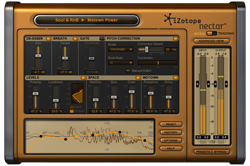 Frank Scales <fscales[at]frankscalescreative.com>: Probably my best find of 2011 was a Pro Tools plugin from the guys at iZotope. It’s called Nectar. It’s sort of a Swiss army knife for vocals and voiceover. It’s especially helpful for guys like me who are delivering a lot of dry VO to clients. It comes with a wide assortment of about 100 starter presets that can be tweaked endlessly, arranged by Genre and Style. Control sections include De-Esser, Breath, Gate, Pitch Correction, Preamp, Loudness, Space, Wet/Dry, Size, Color, Presence, Drive, EQ, input, output levels, mixing or tracking modes. In the Voice Over & Dialog section, some humorously named presets include Nectar Dialog, Nectar VO, Bad Radio, Bleachers, Callback, Commercial Spot, Crowd, Dark Lord, Documentary, Meditation, Podcast.

Jeff Berlin <jberlin[at]jberlin.com> www.jeffberlin.com: Two things from this past year: iZotope’s “Nectar” plug in, a voice processor that enabled me to properly sweeten voice tracks when I’m on the road without a full rack of toys. And Metric Halo’s new LIO 8. Been using the ULN-2 for many years, which has 4 inputs (2 analog 2 digital), but the LIO 8 has 8 analog and 8 digital ins and outs - plus analog sends. This unit has become my studio “brain”. It has excellent onboard processing, and will route signals in and out of Pro Tools, my control room monitor, and my whisper room board. It’s a convoluted setup, but the LIO8 gives me precise control over everything, so that I can now feed different mixes to a phone patch, an ISDN line, Skype, and my headphones - all at the same time, while recording 6 different processing settings. I even like it better than my smart phone.

March 01, 1995 45161
by Jerry Vigil Forget your every notion of what a "mixer" is. The rapid pace of technology is changing that forever. Some high dollar "recording studio" consoles have already realized the power of combining computer technology...
Read More...
© 1988 - 2023 Radio And Production, LLC
Go to Top