These days, when I see a new product designed specifically for radio content, I’m interested. Okay, perhaps when it comes to transmitters, HD encoders and the like, not so much. But when I happened across a press release from a Danish company now known as Hindenburg Systems -- formerly Nsaka -- that described a new editor which promised to speed and simplify the capture and production process, my plans for this month’s review took a 180 turn.

The new editor is Hindenburg Journalist Pro, and while its intended market is broadcast journalists, it’s also eminently suitable for use in voiceover and medium-weight commercial production. Journalist Pro joins two other products in the Hindenburg line: Journalist, a more basic version of the editor; and the Hindenburg Field Recorder. The former are both cross-platform for Windows and Mac, while the latter records and edits on iPhones and the iPod Touch. I focused on the Pro version, since it has all the functionality of the others, save portability.

Hindenburg Systems bills their products as radio-friendly alternatives to Pro Tools, Audition, and portable field recorders. Company CEO Chris Mottes stated his objective playfully but clearly in an email, when he described Journalist Pro as “...a DAW that is squarely aimed at pushing PT [Pro Tools] and co. out of the radio producer’s computer.” Having spent several days recording and editing on Journalist Pro, these guys have a shot at that.

Hindenburg Journalist and Hindenburg Journalist Pro run on Windows XP, Vista, and Win 7, along with Mac OSX from 10.4 upward. While no specific configuration recommendations are available in the documentation, the programs themselves are under 10 MB each, and appear to use little RAM. I suspect that two gigabytes is enough for basic recording and some editing, although anyone who is serious about audio work should have at least two gigabytes installed. As always, more is more, particularly where RAM is concerned, and Journalist Pro does a great deal of its work in RAM. I’m more comfortable with four gigs of RAM, and consider that to be a standard for storage. The programs default to 44.1kHz sampling at 16 bits only; 48kHz recording is available as a preference, but there is no 24-bit option. Hey, it’s radio, right? 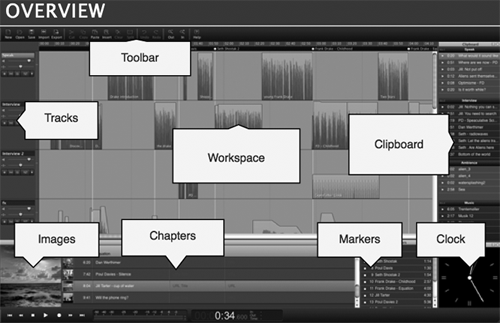 As shown in the Overview figure below, Journalist Pro presents a simple interface consisting of one main window with the tracks front and center, an icon-based tool bar along the top, track headers on the left, and the transport along the bottom. Additional windows can be invoked from the Views menu, including a multipurpose Clipboard, a Markers list, a Chapters window for podcasting, and a Favorites list for storing oft-used clips such as station IDs. They’ve even provided a real time clock so you can actually meet your deadline, instead of listening to the whooshing sound it makes as it zooms by...

Note that you will want a full-function keyboard when using Journalist Pro. The list of key equivalents takes up several pages in the PDF documentation, which is downloadable from the Hindenburg Systems web site. Most key equivalents conform to standards; space bar is play/stop, record is command-R (control-R in Windows), etc. However, some commands are troubling; on the Mac side, command-Delete returns to the beginning of a record session, while that same key combo empties the Trash when in the Finder. By the way, in Windows the command is control-Backspace. The good news here is that most commands have alternate key equivalents if the default is troublesome. But make no mistake -- getting fast in Journalist Pro will require learning a new set of keyboard equivalents.

The Preferences panel is a bit more important in Journalist Pro than it is in some editors, and you will want to visit it early on. It’s quite simple, consisting of three tabs: one for Audio settings including record and play devices, one for the Interface to choose how some frequently-used commands work, and an Advanced tab where you set the Automatic Leveling function to on or off, as well as the Station Profile. The latter tab is perhaps the most important of the three since the Station Profile setting (EU, UK, or US) determines the meter calibration and settings for Automatic Leveling, and because you may not want Journalist Pro to automatically “level” your tracks after recording stops. The adjustment that the Leveling function applies to your tracks will be different depending upon which of the Station Profiles you use, so it’s a good idea to set this up correctly in the beginning.