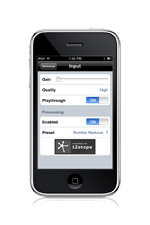 ► Audiofile Engineering, an audio software developer for Mac, has released version 1.3 of FiRe, their professional field recording App for the Apple iPhone and iPod touch. This version incorporates many new features including professional audio effects powered by industry leader iZotope. The most notable of the features is the new Podcast Export option which allows users to publish podcasts directly from the iPhone, making it the first App of its kind. Musicians writing songs or recording rehearsals, sound engineers and designers recording on location, and even students recording lectures in the classroom will appreciate the new features in FiRe 1.3. These include an improved overdub mode, the ability to change the playback speed while retaining the pitch, the ability to compress files in AAC, Apple Lossless, FLAC, and Ogg Vorbis formats, improved search and metadata functionality, a new toolbar for fast access to recordings, an updated SoundCloud API and more. FiRe is now available on the Apple App Store for $9.99. www.audiofile-engineering.com. 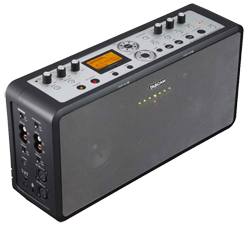 Also from Tascam, the BB-800 Portable SD Recorder, built to make recording portable and simple. Four microphones record to SD Card media at CD or MP3-quality, and a pair of XLR inputs is also available for using external microphones. Recordings can instantly play back through an internal stereo sound system. The BB-800CD offers uncompressed recording to SD Card as WAV or MP3 files. The recorder can blend two microphones on the front of the unit, two mics on the rear and a pair of XLR mic inputs with phantom power as the recording source. Tracks can be played through the built-in speaker system, and can be looped and slowed down without changing the pitch. The built-in tuner and metronome provide audio-visual feedback for practicing students. A set of AA batteries powers the unit, or it can be plugged in with the included power supply. The BB-800 also includes a wireless remote for starting the recording from anywhere on stage. Tascam has also upgraded their audio interfaces to the US-122mkII and US-144mkII USB 2.0 Audio/MIDI Interfaces. The US-122mkII features improved audio performance along with a new, compact design. The US-144mkII shares the design improvements, adding S/PDIF digital audio I/O for four channels of 96kHz/24-bit audio to and from a computer. Both interfaces use USB 2.0 technology for hiccup-free low-latency performance to Mac or Windows computers. The US-122mkII and US-144mkII feature a pair of XLR microphone inputs with phantom power for recording condenser mics into a computer. Balanced line inputs and a guitar level in are also provided. MIDI in and out jacks allow for synthesizer and control messages to be passed to the computer, and the unbalanced line outputs connect to studio monitors. The US-144mkII has the addition of digital in and out, for a total of four channels, and a dedicated headphone level control means you don’t need to switch off your monitors when recording on phones. A copy of Steinberg’s 48-track Cubase LE4 is included. Estimated street price for the US-122mkII is $129, the US-144mkII is expected to sell for $149.  www.tascam.com.

► Apparatus Company, Inc. announces the release of their new music software product for Macintosh called RiffBook. RiffBook is a computer “notebook” for music where riffs can be quickly recorded in the form of audio, video, music notation, tablature, and text notes. RiffBook has come about because so many musicians have lost some of their best works because they couldn’t remember that neat riff that they’ve played the day before. Eventually musicians began taping their sessions, only to end up with a dubious pile of unlabeled tapes with little hope of finding anything again. With RiffBook, musicians can quickly record a piece of music using their computer’s built-in microphone or, with the Professional Edition, record a video with their computer’s iSight camera. With RiffBook, it is not about getting pristine, production-quality recordings; it’s about capturing the moment quickly without the hassles of equipment setup. Transcriptions and tablature may be entered by dragging and dropping notes onto the staff. Text notes can be added to for just about any purpose such as describing performance notes or to include song lyrics. External document files from other programs may also be linked to a riff. When a file is linked with RiffBook, RiffBook makes an “Open” button that allows for quick opening of the file with the application that created it. This is great for linking files such as Logic Pro recording sessions where with one click, the document opens in Logic Pro. Using linked files in RiffBook, all of a musician’s work can be brought together and organized in one place. RiffBook is available in two editions: Standard and Professional. The Professional Edition adds the ability to record video riffs and provides a handy metronome feature. RiffBook Standard is priced at $49.99 while the Professional Edition is $79.99. www.alienapparatus.com.

► New releases from FirstCom Music include: AM063 Clutch Music - geared for sports spots and performance promos. CHAP 352 Funktified Hip Hop Soul - combination of soulful vocals with hip hop beats, fun soul gospel, pop and street jams in an old skool vibe. CHAPC39 Opera Arias/Female - famous operas in a variety of moods featuring female lead vocals. CHAPC40 Opera Arias/Duets - male and female voices join together in duets, ensembles and full choruses on some of music’s most beloved operas. COHH-07 That’s What’s Up - From Atlanta, LA and New York, the cream of the crop in hip hop, rap and R&B crossover. EVO129 Not Too Hard Rock - a mix of new indie rock and established genres for youth culture, club fashion, gadgets and games. Audition these and more at www.firstcom.com.

► The Radio Marketing Bureau unveils Canada’s newest creative superstars at the Fairmont Royal York, during the RMB Crystal Awards, Thursday March 11th. Great radio will be played, trophies will be awarded and one very special entry will take away the coveted Platinum Crystal Award and $10,000 cash prize for “Best in Show”.  The day begins at 9:00 a.m. with the annual RMB Creative Summit, this year featuring two radio heavy-weights: D.J. Williams (9:00 a.m. – 10:00 a.m.) and Jeffrey Hedquist (10:15 a.m. – 12:00 p.m.). D.J. Williams, author of soundBait: Creative Weapons of MASS Distraction, will focus on the importance of creative and ensuring your commercials do what they’re intended to do. Inspiration is set against the backdrop of tight deadlines, difficult clients and unrealistic requests. D.J. Williams will offer pro-active techniques that can be implemented immediately into the daily process at any station at zero cost. Jeffrey Hedquist presents “Time-Saving, Results-Getting, Money-Making, Writers’ Block-Busting Radio Solutions”. Jeffrey Hedquist understands the problems: Challenging economy, staff reductions, no time or budget for production, limited talent resources, not enough good input to create, requests for bad radio. Attendees of this seminar will learn the solutions: Quick-to-use tools culled from four decades of creating remarkable radio success for clients of all sizes. Known as “Advertising’s Storyteller,” Jeffrey Hedquist has won over 700 advertising awards worldwide. The RMB Crystal Awards Gala is an exciting, fast-paced luncheon event hosted by RMB President, Gary Belgrave. The RMB Crystal Awards is Canada’s only awards competition exclusively for radio so anyone in the business of radio creative or radio sales should attend this inspiring event. Upon leaving the show, attendees each receive the 2010 RMB Crystal Awards Winner’s CD. www.rmb.ca.

► Canada’s RMB also reports results from the fifth annual study conducted by the Foundation Research Group demonstrate radio’s continued strength and adaptability in today’s complex market. On average, Canadian adults spend 2 hours and 12 minutes with radio daily, equivalent to the results from the first Foundation Research Study published in January 2006. Whether it’s at home, at work, on-air or online, radio continues to be a powerful source of information and music for Canadians. Of Adults 18+, 83% report that their time with radio increased or remained the same as last year. Respondents reveal the increase can be attributed to more time in their cars, and the ability to listen at work. Highlights from the 2010 study: On average, Canadians spend more time with radio during a typical work day than with any other medium. 38% of adults listen to radio some/most of the time while on the internet. Approximately 1/3 of adults have listened to radio stations online; of those listening online, 58% are streaming local stations. 39% of adults have visited a radio station website. For more information about the Foundation Research Study, contact the Radio Marketing Bureau at 1-800-ON-RADIO or at . ▲

May 01, 2010 6192
by Steve Cunningham Apogee Electronics is well known among high end recording studios for building accurate multichannel analog-to-digital and digital-to-analog converters, along with digital clocks like Big Ben that are used to...
Read More...
© 1988 - 2022 Radio And Production, LLC
Go to Top