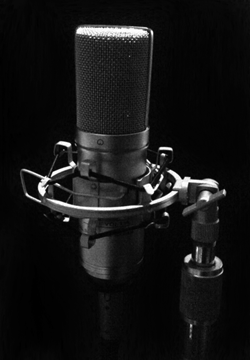 Harlan Hogan is not just a world-renowned voice actor, with a string of credits that goes back several decades and includes brands like Raid, Heinz Catsup, and Life Cereal. He’s also a teacher of voiceover talent and an author of several voiceover books. Naturally, one of the most frequent questions asked by his students is “which microphone should I buy?” As an audio engineer and college professor who teaches recording, I get the same question myself quite often. It can be tough to answer, since there are so many good sounding inexpensive condenser microphones to choose from today.

Harlan decided to take a different approach: Why not design a condenser microphone with voice acting in mind? So Harlan commissioned MXL, the brand name used by Southern California-based Marshall Electronics for their broad line of studio and live performance microphones, to create for him a microphone that was designed specifically for voice actors. His signature VO:1-A mic, a large diaphragm condenser that retails for $199 including accessories, and presents in a good-looking nickel finish with Harlan’s signature prominently displayed across the body, is the subject of this month’s product review.

A product of the partnership between MXL and the tag team of Harlan Hogan and his engineer, Jeffery P. Fisher, the MXL VO:1-A is a large diaphragm cardioid condenser microphone which utilizes a 32mm capsule in a standard side address configuration. Measuring 1.85 inches in diameter and 7.2 inches in height, the VO:1-A is nicely finished in champagne colored nickel plating. At about 1 1/3 pounds it’s heavy enough to feel substantial, but not so heavy as to cause a microphone boom to sag. A metal rail surrounds the wire mesh screen that protects the capsule. Directly behind the wire mesh appears to be a very thin layer of foam, no doubt to protect the capsule from moisture during use. For recording voiceover tracks, a pop filter is mandatory with this microphone but, since almost no one seems to include one, or even the old-fashioned foam windscreen, you’ll need to purchase a proper pop filter separately.

The MXL VO:1-A is packaged in standard MXL fashion. A black, poly plastic box with two latches is lined with foam that is precut to fit both the microphone and its included spyder-style shock amount. A particularly nice touch is the extra set of elastic bands that is included specifically for that shock mount. A separate cardboard box contains a fifteen-foot Mogami microphone cable, a zippered leatherette fleece-lined pouch large enough to hold the microphone, and a fixed microphone stand adapter.

Of course I took VO:1-A apart (although I did not attempt to delve further by removing the small screws that would allow me to extract the capsule). The VO:1-A microphone follows the type of internal construction used in many Chinese built microphones, where two metal rails run the length of the microphone, supporting both the circuit boards and the XLR connector. Like most MXL microphones, the tubular body sleeve is held in place by a machined locking ring around the XLR jack, which is further secured by another knurled ring, this one in anodized black, that is designed be removed when using the included fixed mic adapter. When these two rings are removed, the tubular body sleeve slides off to reveal two fiberglass circuit boards attached to the aforementioned rails. All electronic components mounted on these boards are discrete, and the microphone’s output stage is balanced and transformerless. The XLR jack mounted at the bottom features gold-plated pins to help ensure a good connection.

Along with bipolar transistors for handling the required phantom power, I was pleased to see a pair of JFET transistors on the circuit board being used for class-A amplification. I have seen some microphones at this price level utilize op amps for signal conditioning and amplification inside the mic. While this may save a few dollars in parts, an op amp does not sound nearly as good does a JFET transistor, which mimics the characteristics of a tube more than any other solid-state device.