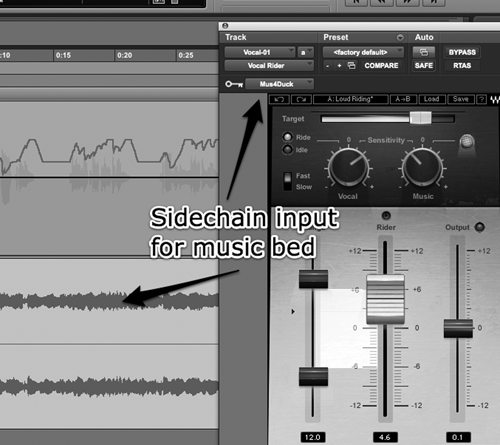 Note that we haven’t discussed the knobs above the Rider Fader. As mentioned above, the Live version includes a knob called Spill. In the regular version of Vocal Rider, the leftmost knob is the Vocal Sensitivity, which helps the plug identify beginnings and endings of words as well as eliminating extraneous noises from the analysis process. Vocal Sensitivity is, in essence, a threshold that tells Vocal Rider to ignore sounds below a certain level, and how sensitive to the sound envelope it should be. A Ride/Idle activity LED lights when an above-threshold VO has been detected. Note that Vocal Rider also includes Waves’ own breath-detection algorithm, so that the plug-in doesn’t turn up all the breath sounds between words. Brilliant!!

Next to the Vocal sensitivity knob is a Music Sensitivity knob, which is coupled to the use of the side-chain input, which only works with Pro Tools and a few other editors. To enable it, you first need to create a send from your music bed’s mixer channel, then assign that send to the side-chain input of Vocal Rider. Do make sure that you’ve turned up the send level to a nominal volume. The Music Sensitivity knob determines the amount by which Vocal Rider reacts to the music bed level. If the bed gets louder during a chorus, then the voiceover will be lifted a bit so it doesn’t get buried. A sensitivity LED monitors the response to the side-chain input and lights when the music is affecting the Rider Fader.

Note that this does not turn Vocal Rider into a ducker -- there are plenty of those out there, and I was not able to get the Vocal Rider to work as an effective ducker. Rather, using the side-chain input allows Vocal Rider to cause the voiceover to ride more smoothly above the music bed. It’s a nice feature, but the fact that it only works in Pro Tools is annoying. But it doesn’t add any great value to the basic purpose of the Vocal Rider, which is to level out a voiceover track.

So those of you using Audition or Vegas as your main editor can still realize the primary benefit of this plug, and we haven’t even discussed the automation yet.

Finally, let me point out a small but important slide switch on the far left, labeled Fast and Slow. This governs the attack time of the voice detector, and affects both the fader response time and the side-chain response time (if available). The attack time constants are preset, but you can switch between the slow and fast settings and take your pick. I found the fast time most useful, since while the level changes moved more quickly they were small enough to be inaudible.

Now comes the fun part. Vocal Rider can record all its movements directly to your editor’s track automation system. Setting that up is relatively simple. The first important item to note is that you want to automate the plug’s Rider Fader, not your track’s native fader. Remember, Vocal Rider is changing the gain of your track via the insert on your track -- it has nothing to do with your VO track’s native fader.

So set up consists of enabling plug-in automation for the Rider Fader on the Vocal Rider plug. Next you engage the Automation Read button below the Rider Fader, and hit play. The Rider Fader’s movements will be recorded on your track’s automation lane for the plug-in. If you do want to use Vocal Rider as you record, then you’ll need to create an Aux track, put Vocal Rider on an insert of the Aux, and buss the Aux output to the input of your record track. That works as well, and the latency of the Rider Fader appears to be near zero. In either case, once you’ve created an automation track with Vocal Rider you can further adjust it as you wish using your editor’s automation tools. You can also automate other functions of the plug, although I did not have need for that.

Waves recommends putting Vocal Rider last in a chain of plug-ins. However, if you want to add a compressed quality to the voice, you can add a compressor prior to Vocal Rider and it will still know how to react. I had some really good results adding a gentle limiter after Vocal Rider, giving a VO track a bit of extra punch.

Waves go to great lengths to explain that Vocal Rider is not a compressor and therefore does not introduce coloration. I get that, as all gain changes are done using a fader rather than an amplifier, although the end result is still an automatic reduction in vocal dynamic range -- which some would still define as a form of compression. But the benefits of doing it in this way are very real, since you don’t hear any of the side-effects of a conventional compressor, and you can edit the results just as you might if you’d manually ridden the fader and recorded the movements.

I tested Vocal Rider with a couple of troublesome VO tracks that had multiple level variations. I’d already tried compressing, limiting, and some hand-drawn level automation, but was never really happy with the results. So I tossed the automation, removed the dynamics processors, and instantiated Vocal Rider. It truly did the trick -- words that were swallowed came out clearly, most of the compression became redundant, and the VO track was consistent throughout.

Like most of Waves’ plug-ins, Vocal Rider is not cheap at three hundred and change on the street. And some would argue that it’s not necessary, since you can ride the gain yourself. I’ll admit it probably won’t make my short list of “deserted island” plug-ins, but I have spent many hours compressing and limiting and automating dialog over the years in an effort to just get it level. Vocal Rider promises to eliminate that busywork. Wait... should I be concerned about job security if this plug does it for me? Hmmm...

Vocal Rider is available in native and TDM formats for $400 and $520 USD, respectively. Street price on the native version is currently a bit over $300. For more information worldwide, visit www.waves.com.

Added to playlist
Auto Dealers for Health
View All Audio

April 01, 2010 10028
by Steve Cunningham Let’s talk dynamics, particularly voiceover dynamics. Depending on the script and personalities, a record session for a high-energy promo can run the gamut from well-behaved to completely out of control --...
Read More...
© 1988 - 2022 Radio And Production, LLC
Go to Top