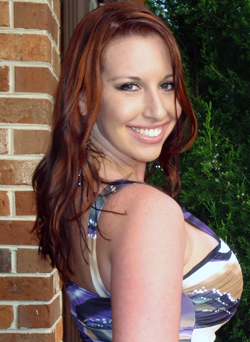 Women in production. How many really good ones are there? The ratio of men to women is overwhelming. Why? That’s one question we ask this month’s interview subject, Rachel McGrath, at Clear Channel Atlanta. There are so few exceptional ones, women at the top of the game, you’d probably have fingers left over if you tried to count them on one hand. Rachel McGrath is certainly one of them. If you’re not familiar with her or her work, join us as we introduce you to this extraordinary talent, and the latest to join the diminutive number of ladies hanging with the best of the best amongst the men in our side of the profession. Still in her 20s, Rachel has a long and prosperous career ahead of her, but already commands achievements most of her male counterparts spend decades reaching. Rachel is currently at Clear Channel’s Atlanta cluster, but one gets the impression this is nothing more than a waypoint on a journey that appears to have no destination outside of tremendous success. With only six years in the biz, you can bet your bottom dollar this is one lady you’ll be hearing lots of in the decades to come. Be sure to crank up the RAP CD for some awesome audio from Rachel.

JV: How did you get your start in radio, and what were some of the stops along the way to Atlanta?
Rachel: This sounds horrible. I’m completely arrogant, but I was one of those kids for which school came really easy. I got bored with school by the time I was 16 and knew, in fact, that I was not going to go to college because I felt like I had already done it, and got to a point in my life at the age of 22 where I really didn’t know exactly what I wanted to do. So I decided I was going to go to the Air Force, but thank God, by a stroke of good luck, I couldn’t get in. Then I went to the Illinois Center for Broadcasting, and from there got an internship at 979 The Loop, in Chicago. I was a promotions intern, and the one thing I learned from there was I absolutely did not want to work in promotions, ever. (Laughter)

But then they let me sit in with the jocks, and I was like, “Ooh, I want to be a jock. I totally want to be a jock.” So, I became a jock -- got hired two weeks out of school, thank God, at a little station in the suburbs of Chicago and became a jock there. Everybody was really, really great to me and nice to me. However, the afternoon girl was a complete bitch to me at that station. I’m just going to keep it real with you the whole interview. She was a bitch, and she was not that attractive. So, she saw me walking up in there, and she immediately hated me, did not try to help me with anything, didn’t try to be nice, smile, friendly, nothing. So, my goal was to take her job, and I took it, like I knew I would. Then after I took her job, they got a new Program Director and I was let go.

I decided I wanted my own station to program, so I moved to Parkersburg, West Virginia. I was like, “Oh, screw this. I’ll just get my own station.” I moved to Parkersburg and was a Program Director there. It was a very interesting experience, and that’s where I decided I wanted to be a producer because the first voice guy I met there was Rich Van Slyke, and he was like, “Hey, Rachel, what are you doing on the air? Why are you not a voice girl/producer? It’s obvious that’s what you’re meant to do.” I was like, “Oh, I never thought about that.” So I decided that’s what I would do because being on the air was just not for me, and I think I sucked at it. I wanted to do something a little bit more creative.

Then, from Parkersburg, West Virginia -- where, by the way, I cried every night in my little, $400 a month apartment – I moved to Twin Falls, Idaho, where I joined Clear Channel, and the story really starts from there because at Clear Channel I took advantage of a resource that Clear Channel has that nobody else does; it’s called the Production Forums. On the Production Forums, you interact with producers from across America, other Clear Channel producers, and they’re like, “Hey, I need your voice for this.” It’s basically a voice share, and through there, people I guess heard my voice. I was still totally green, completely sucked, but I got coached by some of the boys here in Atlanta at the Clear Channel Creative Services Group. They heard me and they just basically took me under their wings and were like, “Wow, you know, you’re really good.” So I got to be friends with them, and nine months later, a production job opened here in Atlanta, and I went from Market zero to Market 8 in eight months. That was in April of ’07.

JV: How long were you a Program Director?
Rachel: I would say about five months, but it was enough to know I absolutely loathed it. I’m the kind of person that likes to sit in my safe studio all day with my safe soundproof walls and not have to interact with the public at all.

JV: What is your official title now?
Rachel: Because I’m so sick of changing my signature, it just says Clear Channel Atlanta Production, but it’s really Imager 94.9 The Bull, Commercial Production, Voiceover Girl. So, it’s everything.

JV: And you’re doing voiceover for…
Rachel: A lot of my voiceover is for PlayOnPlanetNominal, which is my own business. But as far as the Clear Channel stuff, it’s commercials and the imaging voice for The Bull, which is amazing. That will probably change here in a few months. Ann DeWig is actually our female imaging voice. When I first switched over to doing mainly imaging, they didn’t want to lose me on the commercial side, and if I was going to be the voice of The Bull, then I couldn’t do any commercials. So that will probably change.

November 01, 1998 3924
Bumper Morgan, Bumper Productions, Nashville, Tennessee It’s been almost ten years since we first interviewed Bumper Morgan. He was the Production Director at Y107 in Nashville, and already had a great start on his production...
Read More...
© 1988 - 2022 Radio And Production, LLC
Go to Top