On the Whole, It Beats Bailing Hay 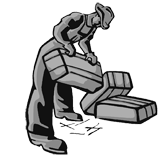 Many times I’ve written about the things that inspire my writing. Rarely have I ever written about the actual work of writing. One thing is certain: writing is not particularly hard work. Not when it’s compared to the kind of work my father did over the course of 35 years as an electrician. I remember when my dad came home absolutely exhausted after working on an electrical arc furnace used in the smelting of aluminum. He was covered head to toe in a smelly, black ash. He looked like a reverse raccoon from the negative silhouette on his face made by the goggles and respirator he wore. I think my mom still has a photo she took of him before he showered. Somehow, he found enough strength to smile for the camera.

It’s also not as hard as the hardest work I’ve ever done. Growing up in Iowa doesn’t necessarily mean one grows up on a farm. While my grandfather did indeed own farm, aside from helping my grandma collect eggs from the hen house, I never really worked on his operation. My first real job as a farm hand came when I helped my best friend bale straw on his grandpa’s farm. After that, I went straight to the local grocery store for my next job. It paid a lot less money but, at least there was air conditioning.

However, writing comes with its own difficulties as a keyboard and mouse present challenges that my father’s voltage meter and wire cutters do not. Over the course of 28 years in radio I have gone from manual typewriters to IBM Selectrics to PC keyboards to smart phones. All were QWERTY. None were comfortable. Allow me to rephrase that. Some were more comfortable than others.

It needs to be noted that I never took a single typing lesson. My high school offered typing as an elective. I didn’t take it because I never thought I would ever need that skill. (Also, I’m kicking myself for not taking Spanish but, that’s another story.) So much for my ability to predict the future. Had I taken that class, I might have learned how to apply better posture so that I might have avoided some of what came later.

The typewriter I used at my first radio job was a manual Royal. It was an enormous beast which, if we had weighed it, would probably have been able to anchor a Carnival Cruise ship. After the hunting and pecking that comes from trying to find alphabetic characters that are arranged in non-alphabetic fashion, I eventually developed the physical memory of where to find the keys. It didn’t take that much effort to press the keys so that they actually typed out words. Well, not so much that I ever noticed after the calluses formed on the tips of my index fingers. Still, as tools go, it did the job much in the same way that a Neanderthal could use an obsidian stone to cut the flesh from a mammoth.

I graduated to an IBM Selectric a couple of years later. It was amazing machine. It had a low profile and that neat little ball so that you could change fonts. Also it had an “On” switch. It was a top fuel dragster compared to that four-cylinder Royal I’d been using. I would bang out scripts at lightning speed, and the calluses on my index fingers eventually disappeared as I learned to bring other fingers onto the job. I loved it so much that I actually saved enough money to buy a used model for myself, thinking that I could use it to write scripts at home and pick up some freelance work. You know that ability to see the future that I don’t have? A year later, I saw my first computer.

It was a Compaq. Oooooo. It had a 40 meg hard drive. Double oooooo. Two floppy disk drives; a 5 inch and 3.5 inch and it ran on DOS! Triple oooooo with chocolate syrup. It was top of the line and was the beginning of my doom. While it was as fast as my Selectric, little was I or anyone else to know the kinds of insidious injuries it would cause. It took less than ten years for my first case of tendonitis to show up. Why? How did this happen? In the previous years of working on typewriters I never once was injured. How was it that my electronic wonder-machine could cause so much pain?

Two things that I can think of are keyboard placement and body placement. Why didn’t I have any pain when I used the typewriters? Well, do you remember how those old office desks had a pull out shelf where the typewriters sat? Those pull-outs were always at least an inch or two below the actual surface of the desktop. When I turned to type, I was at the perfect angle to go to work. When computers started making their way into offices, they didn’t fit on those pull-outs. The keyboard, mouse pad and monitor took up too much space, so like most folks I moved the monitor to the desktop and left the keyboard and mouse on the pull-out. Next thing I know, I’m wondering why my neck hurts.

It didn’t take long for office furniture that was actually designed for computer use to come along. Sadly, I didn’t work for many companies that put things like that into their budgets and had to make do with other customizations, like the device that raised the monitor and had a slide out shelf for the keyboard. Finally, the monitor, keyboard and mouse were together on the typewriter pull-out. My neck doesn’t hurt anymore but, why was my elbow sore? And why does my shoulder hurt too?

For a number of years I simply made peace with my elbow and shoulder pain. That was until I tried to pick up a book and couldn’t lift it because of the excruciating agony. After a trip to the doctor and a prescription for physical therapy I learned many things. First, physical therapists are sadists in scrubs. Second, they’re smart. Also, they’re less expensive than surgeons but, I digress. What I learned from the physical therapists were some simple exercises that lessen the effects of the computer associated injuries that I had endured over the years. Moreover, I learned that I am an oddly shaped human being. While I am tall at 6’4”, my arms are disproportionately short for my height. (I wonder if that’s why I never could hit the curve ball?)

After several attempts at trying to find furniture that fits my unusual shape, the best I can do is come close. Add my wheelchair to the mix and it’s a whole new bowl of fruit. Fortunately, I can easily transfer from my wheelchair to an office chair and find an adequately comfortable fit. I wear a brace on my forearm to mitigate the ligament damage to my elbow, and I take frequent breaks to rest and exercise my shoulder.

Now if I could just come up with an exercise for my thumbs. My new smart phone is killing me.