I won these little speakers in a poker game. Right, I knew you wouldn’t believe me but it’s true, and I’ve decided to review ‘em this month. See, ninety-nine percent of the time getting a product for a RAP review is a process of research, consultation, telephone calls, a little begging, faxed memo loan forms, and waiting for UPS.

This time I just had to come in 15th out of about 70 Texas Hold ‘Em players at a charity tournament held at the Village Recorder. And my wife said I could go... honest, she really did, and I played well enough to walk out with a pair of company-donated Genelec 6010a speakers. Heck, if I hadn’t gone tilt at the featured table I might have won the Telefunken mic, but my emotions got to me, what can I tell ya? I took them home, and during the following week I went through the normal process of telephone calls, a little begging, memo loans and waiting to get the matching 5040a Subwoofer so I could check out the whole system. Meanwhile I went to work on my stereo prize. 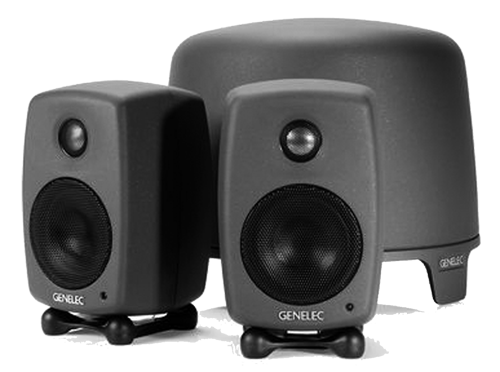 When the hosts of the tournament first handed me the pair of smallish cartons, I wondered whether I was the proud owner of some really nice computer monitors or some very small studio monitors. It turns out that the Genelecs are a bit of both, with some caveats.

The 6010A is a rear ported, two-way, active monitor that can be used on its own, or in conjunction with the 5040A active subwoofer in stereo plus sub or 5.1 surround arrangement. Well below the price level of Genelec’s studio offerings, they’re priced to be attractive for high-end multimedia (read: computer) use, or for the small production studio that wants more panache than one usually gets in a low priced pair of speakers. This is not to say that the 6010A’s are cheap...

Genelec’s products have always had the Scandinavian design thing going on... their enclosures and “horns” (which they call Directivity Control Waveguides -- gotta love that marketing-speak) have for some time featured fewer sharp edges than other monitors, along with a very clean appearance and a perfunctory green LED embedded in the front. 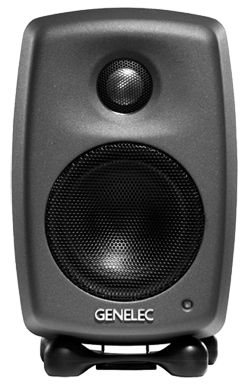 The 6010A loudspeakers stand just over 7-1/2” high with a 4-3/4” width and 4-1/2” depth, and each weighs in at just over three pounds. The housing is cast aluminum and is available in white, gray or charcoal gray (I got the charcoal, thank you). The design of the die-cast aluminum enclosure features Genelec’s Minimum Diffraction Enclosure (MDE) to reduce diffusion and internal resonance, and in the rear, a Directivity Control Waveguide (DCW) acts as a bass port to increase low end output. The free field frequency response (away from any walls) is rated from 74 Hz to 18 kHz (+/- 2.5 dB). A stereo pair is rated to produce 102 dB SPL peak output (in half space at 1 meter, with music program material).

The 6010A’s two drivers consist of a 3/4” metal-dome tweeter and a 3” woofer, both of which are protected by individual perforated metal grilles. Each driver is fed by its own 12W amplifier in a bi-amped arrangement with a crossover at 3.0 kHz. Because the enclosure is curved, if you’re going to place the speaker on a flat surface you’ll need the included rubber foot assembly, called an Iso-Pod. This odd-looking device serves both to stabilize the speaker while also isolating it from the surface upon which it sits. If you prefer to wall-mount the speakers instead, you’ll find several tapped holes in the back of the cabinet for attaching an included wall-mount bracket. There’s even a hole in the bottom which appears to allow you to put it on a camera tripod.

Since the 6010A is intended for the prosumer market, the audio input connector on each speaker is an unbalanced RCA female with a 10k ohm impedance such as is provided by an iPod. Both the RCA jack and the power input next to it are mounted so that cables will hang down vertically, which is a nice touch. Above these connections on the rear panel are a power switch, a set of very small, screwdriver-operated level controls, and a set of even smaller DIP switches to adjust the bass frequency response. The latter provide up to 6dB of low-end cut (called “bass tilt”) to compensate for boundary effects, and an additional -4dB cut at 200 Hz to compensate for reflections and other frequency side-effects that arise when speakers are placed on either side of a computer monitor. 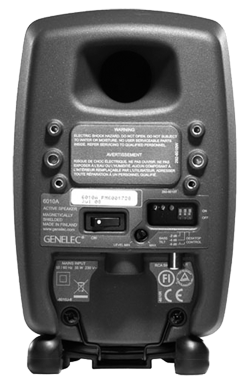 When I got them out of their boxes and up on a meter bridge, I was first struck by the 6010A speakers’ diminutive size. Even sitting on their Iso-Pods, they were smaller than some low-end Logitek speakers I use at home. But they’re Genelecs, right? If you’ve been around for any length of time, you know that the Finnish company known as Genelec has been in the high-end studio monitor business for awhile (actually since 1978. And please note that Finnish means they’re located in Finland, right? Just checking.) In the US, Genelec have been a staple in high buck recording studios since the early 1980’s, when they became popular for mixing music, and later for film and TV work. But these are just so... small. How much cojones can I possibly get out of these little boxes? I plugged them in and turned on the power switch. The familiar green LED shown on the front panel. I hit play on the iPod and waited.

Okay, I’m impressed. Sure, the low end drop-off at 74 Hz is evident, especially on bass-heavy material, but danged if these don’t have the warm midrange and crisp high-end that I’ve always associated with Genelec. In fact, I have been of the opinion that Genelec’s are almost too bright in some cases, but not in this case. For small speakers these are really nice for music. With radio spots that consisted mostly of voiceover, I heard details that I hadn’t heard before, and I didn’t really miss the extreme low end. There’s enough high bass and low midrange to generate a bit of rumble when it was present in the mix. The rear reflex bass port does its job well, although it can’t amplify what the 3” driver can’t produce in the first place. Nonetheless, I think the 6010As are more than adequate for radio production work.