► Sennheiser introduced K-array, the newest addition to its family of distributed brands. K-array manufactures incredibly thin, lightweight loudspeakers that deliver impressive power and sound quality for medium to large-scale applications, including touring, events, installed sound, and broadcast. K-array installed sound audio products fill boardrooms, museums, corporate events, churches, broadcast studios, and theaters with quality sound while remaining nearly invisible. The compact components range from four inches deep all the way down to half an inch, while retaining an incredible amount of power and adaptability. Models include the Vyper 3D line arrays, Tornado point-source speakers and the Kobra series of ultra-slim 3D line arrays. The power of the series is exemplified by the Vyper KV50 ultra-flat 3D line array element, which is less than 1.5 inches wide, and half as deep, but can fill a space that seats hundreds. K-array’s Red Line delivers amazingly clear audio for concerts, conferences, parties and other functions. The adaptable and portable PA systems are only a couple of inches wide, yet can deliver full, rich sound to an audience of 1,000 people. The line includes the KR100, KR200 two-way speakers, and KL12 and KL18 ultra-light subwoofers. The KR speakers measure only a couple inches across, and the KL subwoofers weigh just over twenty-five pounds. With adjustable coverage and extreme portability, they represent the best possible solution for event audio. The KH series, which consists of the KH4 two-way flat panel line array and KH15 two-way ultra-compact line array, are self-powered, yet measure only six inches deep. The KH4 is ideal for long throw applications, such as arenas, while the KH15 is designed for medium throw applications, such as theaters, concert halls, and churches. The KS4 “figure 8” subwoofer is also remarkably small, weighing in at less than eighty-five pounds. This makes for a top-quality touring PA that is only a fraction of the size of a traditional touring PA system. The KA series of Class D amplifiers address all the needs of high-end applications. Each amplifier is outfitted with on-board DSP, which provides perfect signal processing for all K-array products, as well as a broad selection of dedicated presets. Rounding out the offerings for live sound applications are the Overbass series of self-powered subwoofers and the ultra-compact, high-output KM8 stage monitor. The KM8 enables accurate reproduction of both vocals and instruments with high gain before feedback, and can operate alone or in an array of multiple units. www.sennheiserusa.com.

► TASCAM’s CD-160 CD player has been updated to the new CD-200. The new player uses a brand new transport, the TEAC CD-5020A. The new transport is custom designed for audio playback with a smooth loading drawer and low clamping noise. The internal clock has been improved for a smoother sound and decreased jitter. “Like most manufacturers, TASCAM has had difficulty finding CD transports that can record and play CDs at audio speed,” said Kenji Matsu, International Business Manager for TASCAM. “Fortunately, TASCAM’s parent company, TEAC, is one of the premier drive manufacturers in the world. We worked with TEAC to create a new drive mechanism that could be used in future CD products, the first being the CD-200.”  Like the CD-160, the CD-200 has unbalanced phono outputs and S/PDIF digital out on coaxial and optical jacks. MP3 and WAV file playback is supported, and front-panel Folder navigation buttons are provided. A wireless remote control with numerical track select buttons is also included. www.tascam.com. 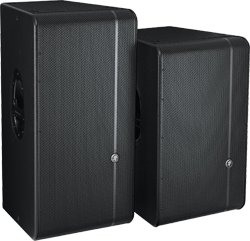 ► Mackie announced the HD Series High-Definition Powered Loudspeakers, creating an entirely new category: High-Definition Live Sound. The HD1521 2-way and HD1531 3-way Class-D amplifiers deliver up to 1800W of peak system power. Mackie created the “active” electronics game long ago, incorporating precision crossovers, transducer time alignment and phase correction circuitry right in the box. HD Series loudspeakers take this even further with the implementation of patented acoustic correction processing that counters the inherent physical attributes that can make typical loudspeakers sound honky or washed out. 15” neodymium woofers are perfectly matched with the 1.75” heat-treated titanium compression driver. The HD1531 3-way also features a 6” midrange driver and Mackie’s optimized WaveFront™ mid/high horn system for ultra-wide, consistent coverage. A user-adjustable 3-band EQ with a sweepable mid lets the user gently and flexibly EQ the system for the application at hand. This is a great feature for smaller setups that may not have a ton of outboard gear. The rugged all-wood cabinets feature 12 integral fly-points for horizontal or vertical rigging and both models are pole-mountable. Integrated protection circuitry and robust build quality ensures years of reliable use. The HD1521 will has a U.S. MSRP of $1,249.99. The HD1531 at $1,499.99. www.mackie.com.

► iZotope, Inc. has expanded their licensing program with a suite of audio enhancement tools and effects available for integration into 3rd party software applications for the iPhone and iPod touch handheld devices. “We are seeing a significant demand for our audio effect libraries on the iPhone as thousands of developers are flocking to this revolutionary platform. These developers are redefining the way consumers interact with their music and audio,” explained Mark Ethier, CEO of iZotope. “With our offerings for the iPhone, we are excited to enable their innovation as the first to offer high quality audio algorithms for developers to integrate into their applications.” The new iZotope Mobile Audio software development library is based on award-winning and innovative audio DSP code base derived from iZotope’s best in class professional and consumer product lines. Now phone applications can benefit from the same audio processing technology used by millions of people in over 50 countries, from independent musicians to major broadcast and recording studios and GRAMMY Award winners. Two key iPhone application developers will be among the first to incorporate iZotope technology into their products. “FiRe” from Audiofile Engineering and “SmackTalk!” from Marcus Satellite will both feature licensed audio tools from iZotope. Audiofile Engineering, a leading Mac-based developer of professional audio products, plans to incorporate iZotope audio effects for audio normalization, cleanup, and enhancement in an upcoming release of their “FiRe” Field Recorder App for the iPhone. Audiofile Engineering is actively developing new iPhone applications as well as providing development services to produce third party iPhone applications. Marcus Satellite, an animation and electronic music veteran turned App producer, is looking forward to using the iZotope audio effects SDK in his top-100 best selling iPhone App “SmackTalk!” to enhance his users’ experience by adding a wide array of interactive voice effects. “I’ve been using iZotope’s audio DSP technology as VST plug-ins on the desktop, and I’m excited about having that level of quality and interactivity available on the iPhone platform”. www.izotope.com. 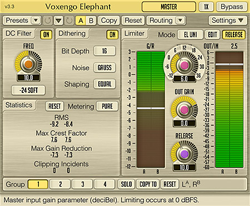 ► Voxengo Elephant update version 3.3 is now available for download. Voxengo Elephant is a mastering limiter plug-in for professional music production applications, available in AudioUnit and VST plug-in formats, for Mac OS X, Windows XP and Windows Vista computers. It features a variety of limiter modes that can be deeply customized, and a comprehensive set of level metering tools. Elephant limiter can be used for mixing and mastering of both stereo and multi-channel music and sound material, at any standard sample rate. Other new updates include Voxengo Tube Amp v2.0 and Voxengo MSED 2.1. Both are free audio plug-ins. These plug-ins can be loaded into any audio host application that conforms to the VST or AudioUnit plug-in specification. Plug-ins are compatible with Windows XP, Windows Vista (32- and 64-bit) and Mac OS X 10.4.11 and above (Intel and PowerPC) computers (2 GHz dual-core or faster processor with at least 1 GB of system RAM recommended). Voxengo Tube Amp is an audio effect plug-in that applies asymmetric tube triode overdrive usually found in single-tube microphone pre-amp boxes. The sound this plug-in produces varies from a mild “warm” overdrive to a fuzzy distortion. MSED is a professional audio encoder/decoder plug-in for mid/side processing which is able to encode (split) the incoming stereo signal into two components: mid/side pair, and vice versa: decode mid/side signal pair into stereo signal. www.voxengo.com.

► Australian broadcast radio software newcomers RadioWorkFlow have announced they will release their new programming control package for worldwide sale on October 19. Co-owner Vaughan Jones says, “I’m kind of excited because I know that this is something brand new for radio. There’s nothing at all to compare it with. Sales promotions and programming is an area of our industry that’s been under-served in this way for years. It’s been a source of frustration for account managers, sales managers, promotions and programming people... and with WorkFlow, we aim to fix that.” The new server based software is revolutionary in its application, linking sales and promotions teams with programming and production to build a highly efficient and error proof environment that makes programming radio feel like social networking. Director of the company, co-owner and head of software development Shane Zammit said there was a deliberate focus on making sure the package felt like it was designed for radio. “When we went to the drawing board on this one, we wanted to retain the values that attract people to radio in the first place, the informality and loose social environment that come with radio, and I think we have achieved that.” Radio WorkFlow is expected to sell for less than $12,000 per station in Australia, with discounted packages for regional stations and network installations. A video demonstration of the product is online at www.radiowork.ow.com.

► The Radio Marketing Bureau (RMB) in Canada announces the opening of entries for the RMB Crystal Awards. The Radio Marketing Bureau is calling on all creatives, advertisers and producers to gather up their best radio spots from the past year to enter the Crystal Awards and qualify for the coveted $10,000 platinum prize. 10 categories to enter for an opportunity to capture the Best-in-Show Platinum Prize. The deadline is November 2, 2009, 09:00 EST. The Radio Marketing Bureau (RMB) is Canada’s resource centre for radio advertising. The RMB’s mandate is to inspire and educate members, agencies and advertisers about radio’s power and effectiveness in achieving and exceeding business goals. Through consultation, marketing, research and creative services, RMB supports advertisers in achieving maximum return on their media investment. www.rmb.ca.

► In his bid to help a challenged economy, Jeffrey Hedquist has launched a takeoff on the government’s assistance for auto dealers with his “Cash For Radio Clunkers” program. Hedquist will give you cash for your old radio spots towards new ones. If you have under-performing radio commercials, send them (scripts and MP3s) to Hedquist . The Hedquist team of writers, directors and producers will do a free analysis and call you back with an estimate of what it will take to make them into ones that work better. The less work they need, the more cash you’ll get for your trade in. The analysis is free, and there’s no obligation to go any further. For details email . ▲

July 01, 1993 8497
by Jerry Vigil Trak*Star is the new family of digital production software programs from Arrakis Systems. These programs are designed to run on the basic Arrakis digital workstation which runs the popular DigiLink software and...
Read More...
© 1988 - 2022 Radio And Production, LLC
Go to Top