This month’s product review involves yet another happy accident. I subscribe to a number of voiceover mailing lists, and last month one of them advertised a deal to list members on a product that would turn an iPod into a self-contained recording device. Now I admit I’m addicted to my iPod, and it’s never far out of my reach. I even have an audio cable with a 1/8 inch stereo plug hanging down from behind the dashboard of my 1965 Ford, which I installed specifically so I could listen to my iPod during my work commute in the old Ranchero. So when I saw this I was definitely interested.

However, I was equally skeptical. Several years ago I purchased a Griffin device that had a microphone and it, and purported to make the iPod capable of voice recording. Unfortunately the recordings were all eight bit and suitable only for creating audio grocery lists. That device was a complete waste of money.

But this little widget, offered at a modest discount to list members, was made by Blue Microphones and I simply couldn’t resist. The thought of being able to go out with little more than my iPod and this little widget, and record actualities, interviews, and sound effects, was more temptation that I could withstand. Out came the credit card, and off went an order to Baltic Latvian Universal Electronics, or Blue. A few days later, Mikey arrived.

Blue Microphones manufacture some very fine studio microphones with very strange names like Woodpecker and Baby Bottle. Their latest creation, Mikey, is a stereo microphone that turns an iPod into a recording device. There’s nothing particularly revolutionary about this in principle; other products from consumer oriented companies have had products like this for several years. However, most of these microphones have been definitely consumer grade rather than professional grade, and are marketed for use with iPods as voice memo recorders. Mikey does things just a little bit differently.

First, Mikey is a true stereo device with two separate condenser microphone elements. Second, it’s capable of generating stereo linear wave files at 16/44.1 kHz. Third, the mic elements are clean and quiet, and so are the electronics. Finally, Mikey includes a small speaker mounted on its backside, which allows you to play back recordings at a low volume, but loud enough to hear if you’ve actually recorded something that’s acceptable.

Mikey is the width of an iPod, approximately 2 1/2 inches, 1 3/4 inches high, and 1/2 inch thick. The business side of Mikey is where the microphone elements are located behind a black metal mesh grille fitted with the Blue company logo. The backside of Mikey looks exactly like the front, minus the logo.

At the bottom below the logo you’ll find the swivel that also houses the iPod connector. The swivel adapter itself has five different positions through 180° of movement. This allows you to set the iPod on a table and point the microphone at the sound source.

In addition to the connector, the front of the swivel is home to three blue LEDs, below each of which is a wave icon with either one, two, or three waves. These indicate the sensitivity level of Mikey, with the leftmost icon (three waves) indicating the least sensitive level setting, designed for recording very loud program material like a live performance. The medium setting is generally the correct one to use for most situations, while the rightmost high sensitivity setting is best used for very low volume audio.

On the backside of the swivel adapter is a very small slide switch, which is used to select the desired sensitivity setting. Although the switch itself is extremely small, it protrudes from the case just far enough that you can move it with a fingernail. 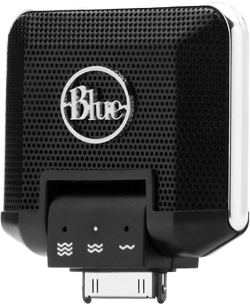 Installing Mikey into the iPod is a simple matter of plugging the exposed connector into the slot at the bottom of the iPod. This causes whichever LED corresponds to the current sensitivity setting to light up, and also engages the Voice Memos option on the iPod. On an iPod classic, fifth-generation iPod, or fourth and third generation nano, a Voice Memos playlist shows up in the main menu. On a second generation iPod nano that playlist can be found under Extras. The Voice Memos playlist is where Mikey will store your recordings on the iPod.

And yes, it also works with the iPod Touch. In fact, I understand that it will also work with an iPhone, although the phone will show a dialog box that says it’s not supported. But clicking off that dialog evidently allows you to go right ahead. Blue says the next revision of the product will actually include proper iPhone support.

Mikey is obviously a consumer product, and Blue does not include detailed specifications as to its performance. I was especially curious about the actual sensitivity of Mikey in each of its three settings, but had no tech specs from tell me what was what. Time to engage in a little informal lab testing.

June 01, 2012 5813
by Steve Cunningham Having spent last month’s allotted column-inches examining yet another multitrack audio editor, it might serve to take a look at the current state of the art in the land of simple two-track recording and...
Read More...
© 1988 - 2022 Radio And Production, LLC
Go to Top