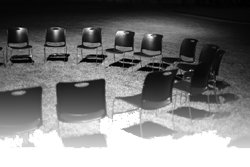 The unthinkable has become the norm. In the ravaged landscape of radio, our colleagues are disappearing in ever-increasing numbers. And the sad fact is, they’re not coming back.

The radio crisis is at critical mass or beyond. Let’s just call it free fall. Revenues, spots, spot prices, station prices, stock market losses. But the worst losses are, certainly, of the human variety. People who have dedicated their lives to the practice of radio lose their jobs. It’s not like soldiers in Iraq or Afghanistan losing their lives. Yet, these losses make those who remain feel much emptier.

Sadly, the imaging area of radio has felt the impact of change as much as the other sectors. It wasn’t enough to have one person image three or four or five stations. How about outsourcing this work to the lowest bidder? What’s reasonable? $10 promos, $4 sweepers? Cut back on the tools of production. Hardware designed for high school kids on a budget. Most successful imaging people have a better rig at home than they do at the station. Geez, what if that’s the way doctors operated? Appendectomy anyone?

Some of my very best friends are gone already. From the biggest markets and most savvy veterans to the novices in the middle of nowhere, the departed are souls who generally cared a great deal about radio, where it is going and how to make it better. We must hope that most of those who remain feel just as passionately. We must hope that radio survives the bloodbath of personnel and listeners and advertisers.

But hope is no replacement for ingenuity, hard work or talent. Hope will not substitute for taking risks, working smarter, putting out a better product than we ever have before. And if radio doesn’t do just that, it will slowly but surely become an archeological dig at the mass media cemetery.

Assuming that the price of a movie ticket is about $10, you can buy a share of stock in quite a few of the top radio companies and still have enough change for popcorn and a soft drink. This is not some freak occurrence of the economy considering most stocks have rebounded whether they deserve it or not. This implosion is occurring in a bizarre Wall Street universe where many companies with severely contracted revenues are seeing their stocks rise. Radio doesn’t seem to fit that investor fantasy.

It doesn’t matter if radio’s surviving management wants to blame this disaster on the economy, IPods, satellite radio, media proliferation, bad luck, bad timing or fickle audiences. It doesn’t matter what happens with HD radio or bridge financing or government bailouts. The ship has sailed on excuses of every variety. No one wants to hear them. They don’t solve the problem.

Wait. There’s a thought. What’s the problem? How do we fix it? No time left for bullshit or corporate maneuvering or damage control. The content and presentation of radio has become as stagnant as a delivery system that is getting close to 100 years old. Formats are frozen in a freaky time capsule. You can predict what the next song is going to be. You can predict what the contests are going to be, what the air personalities are going to sound like, even what the imaging will be after the next break. Stale, predictable, unresponsive to modern trends. If it sounds exactly like the U.S. automobile industry, that’s because it is.

Radio is G.M., Chrysler and Ford of old. The difference is that there are no foreign automakers to produce higher quality cars and trucks. We are finding out that you can’t wring ingenuity out of an auto executive who designed and steadfastly promoted the past. You have to make changes at the top, changes in the philosophical and operating approaches and then you still have to get lucky. That’s what radio has to do now. It is time to replace many of the leaders who have guided radio for years. They have outlived their usefulness. They brought down the industry, they failed to see the edge of the box with high powered telescopes, and they fired many of our friends when their own lack of vision and courage failed.

No coach, no CEO, no politician should be able to survive this horrendous performance. You had a long run. Presumably, you made a lot of money. Retire. Let’s get on to the only chance radio really has: A huge overhaul that will bring passion, ingenuity, hard work and massively energized content back to the airwaves. The alternative is de facto extinction.

The internet will not save radio. You can stream 6,000 stations. You can move legends like WBCN to a website. You can sell advertising for Pandora. You can say that internet advertising for radio is up 163% and still not have enough money to pay the utility bills. Television is not radio with pictures. The internet is not radio with pictures or fewer commercials or more specialized music. The internet already has all that stuff, often done better. The only things that will save radio are more ingenuity and risks, far less predictability, new blood and new formats. Without them, we may be the last ones turning out the lights.

Let us hope that many of our colleagues and friends have not vanished in vain. Radio’s operating expenses are no longer the problem or the solution. The $4 sweeper is the white flag of surrender. Admit failure, embrace change. Don’t make the medium and smaller markets do all the pioneering work. The big boys can’t hide anymore. Be accountable to your listeners, your employees and your stockholders by initiating bold new ideas. The status quo is terminal. Don’t be wimps. Honor the departed by making radio something that we would actually like to listen to ourselves.