Editor’s Note: We’re using a lot of ink in RAP talking about bad times and the economy. It could be worse. RAP contributor Ed Thompson reminds us of our priorities...

Five years ago, when I was building a recording studio in my basement, my Dad came over to lend his considerable electrical talent in rewiring the room. Hey... whenever you can get a union electrician with 35 years experience to work for you for nothing, you take it. During the installation of one line, Dad said to me, “Ed, this is not a lesson. You just hold the tools.” It’s a funny line between him and me. Dad knows I’m not real handy with the things that separate humanity from most of the rest of the animal world.

Trouble is, that funny private joke between a father and son isn’t a hard and fast rule for me. Well, it wasn’t… until the day after Christmas of 2008.

Christmas Day was a celebration that just couldn’t be beat. It was one for the books. I took note of how much giving was done and thanked God for living in such a country where that much giving could be done. After a long day of making merry, we headed home for a long winter’s nap.

The day after Christmas is usually a day for making sure new toys batteries are installed and the beeps and bleeps and lights work as they should. However, the weather was insanely warm for Iowa in winter. As a result, ice in the gutters on the rear dormer of my house was too much weight to hold and like the walls of Jericho, came a tumblin’ down, bringing with it a length of facia board and leaving exposed rafters. Lovely. Home repairs over the holidays.

I let the snow and ice melt over the course of the day and then at 3 o’clock, a climbing I did go. I had some safety measures set up. I put in a roof jack, which is essentially a length of wood fastened to brackets and nailed directly into the roof. Up I went, thinking if I kept low and slow I could compensate for the pitch of the roof. No good. Two steps up, I started sliding back. I hoped to catch the roof jack. I did. Trouble was, it popped right out. My last hope was to grab the gutter on my way over the edge of the roof. It did not break my fall. I had built up enough momentum that when I grabbed the edge, it flattened out. I was going down.

The actual distance from the edge of my roof is barely more than eight feet. But, Sir Issac Newton was a brilliant man. All of his laws of gravitation and motion remained in place. I hit the concrete straight up and feet first. However, I am not a 100 pound, 16 year old gymnast. I am a 285 pound, 47 year old writer and I did not stick the landing. The shock force waved up my legs and through my spine where it concentrated on my L1 vertebra, causing an “explosive fracture.” I was paralyzed from the waist down before the rest of me even hit the patio.

Shock is an amazing thing. When there is too much trauma for a person to really handle the actual pain they are in, the body shuts things down just enough to keep you from going insane. Still, I screamed. Also, I prayed. My wife heard my screams and summoned help. I thought it was only two minutes before the paramedics arrived. It was actually ten. Shock also changes one’s perception of time. The rest of the evening is mostly waves of images and short conversations with paramedics, nurses, radiologists. Morphine miraculously eases pain but also warps perception. The last thing I remember was a doctor at the University of Nebraska Medical Center placing a mask over my face. Say good night, Gracie.

The next morning, I woke up with 2 long rods of titanium drilled into the two vertebra above the fracture and the two below, inserted by the good Dr. William Thorell who used those metal rods as high tech rebar to graft as much bone as he could find from what was left of my spine and harvest from my hip. He also bore glad tidings. My spinal cord was not severed.

I spent the next three weeks in the hospital, healing, praying, and re-learning to do many of the things I had come to take for granted like rolling over in bed, sitting, dressing, and now walking. I have some feeling in my bottom and nearly full use of my thighs. I’m pretty much numb from the knees down. However, I am home with my family and I am doing out-patient physical therapy. I’m working hard, and on January 26th, with assistance of braces, parallel bars, and two professional therapists I walked eight steps up, turned and walked eight steps back. 16 to start, how many more to go?

I have a lot of work to do over the next couple of months and none of it will have anything to do with radio or production. However, I’ll be back in the game soon. In the meantime, I will ask for your prayers. Believe me when I tell you this, I can feel them working. But I would ask this of you. For every prayer you might say for me, say two for my blessed wife, Amy. Not only is she dealing with a healing husband, she is also caring for three children while working a full time job. She is my hero and I love her now more than ever. 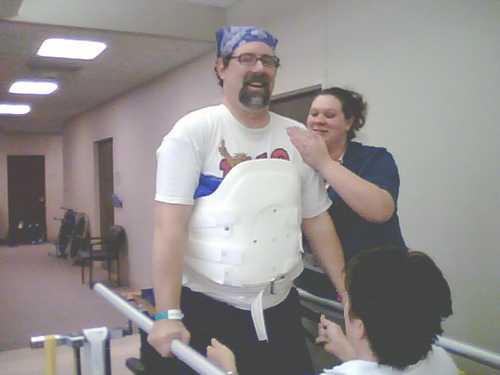 July 01, 1995 10296
Steve Martin, Presentation Producer, BBC Radio Scotland, Glasgow, Scotland Before commercial radio ever existed in Britain, there was the BBC, what we in the US might call Public Broadcasting. There are no commercials on BBC...
Read More...
© 1988 - 2022 Radio And Production, LLC
Go to Top