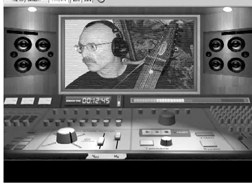 ► eSession allows anyone in the world, working in their own studio, to hire and collaborate with world-class musicians, engineers, and producers via the Internet. The company’s new Virtual Glass™ software plug-in expands the service, providing real-time musical collaboration, so that, for example, an artist in Paris can connect to a studio drummer in New York City who uses different recording software and can monitor the recording session via audio and video as it happens, even remote-controlling the drummer’s software, all in perfect sync. This effectively creates a globally accessible music community. In a traditional, commercial studio, the engineer operates the equipment in a control room while the musicians, separated by a glass partition, perform their parts. Virtual Glass™ uses the Internet as the high-tech equivalent to the glass partition between engineer and musician. Its 3D design depicts a recording console and a “virtual glass” partition that functions as a video screen, so even the least tech-savvy user feels right at home. To use Virtual Glass™, users need a recording program, a high-speed Internet connection, a Web camera, and an eSession user account. Installation is simple, and there’s no copy protection. The software works with any Mac-compatible USB or FireWire camera for real-time video; the camera mic enables communication with the session players. Virtual Glass™ is available for Mac OS X in RTAS, VST, and AU plug-in formats. Windows versions are also available. The new version 1.1 adds latency compensation so that new tracks are recorded and monitored in sync with existing tracks, as well as accurate ReWire synchronization for linking two sessions. A Gold subscription for eSession is $19.95 per month. www.eSession.com. 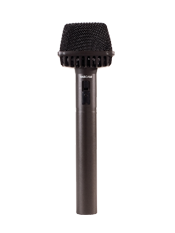 ► TASCAM has premiered the TM-ST2 and TM-STPRO X/Y Stereo Microphones. The unbalanced TM-ST2 is an affordable microphone with both a 10’ cable for live recording and an 18” cable for video camera connection. The TM-STPRO adds a balanced output, includes a 16’ stereo XLR cable and has the ability to run on phantom power. Both microphones feature a switchable low cut filter and come with a mic clip, battery, wind screen and protective carry bag. “Part of TASCAM’s recording legacy is making recording simple for musicians,” explains Paul Jenkins, VP of Sales and Marketing for TASCAM. “The new TM-ST2 and TM-STPRO make great-sounding tracks simple and affordable, whether recording a live event, school function, house of worship event or studio performance.” TASCAM’s TM-ST2 has an expected street price of $149. The TM-STPRO has a projected street price of $179. 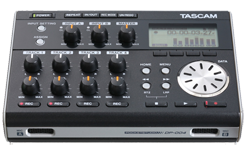 Also from TASCAM, the DP-004 Digital Pocketstudio, a portable four-track digital recorder. Based on 30 years of Portastudio® experience, the DP-004 retains the legendary ease-of-use of cassette-based four-track recorders but updates it with CD-quality digital recording. Instead of confounding menus and windows, the recorder uses a set of dedicated knobs and buttons for easy operation. A pair of unbalanced 1/4” inputs accept mic or line signals, or musicians can employ the built-in stereo microphone. A stereo mixdown track is also included, and tracks or mixes can be transferred to a computer using USB 2.0. Smaller than a paperback book, the DP-004 is portable enough to bring anywhere. The DP-004 records to SD Card media, and a 1GB card is included. It features autopunch recording, track editing and an undo function. A metronome and tuner are built-in, and the Input A jack accepts a guitar-level signal for direct recording. The DP-004 is shipping with an estimated street price of $199. www.tascam.com.

► Blue Microphones announced the latest additions to their winning line of products; the BottleRocket Stage One Solid-State Microphone System and the Bottle Rocket Stage Two Tube Microphone System. The Stage One BottleRocket is a transformerless solid state microphone system. Fully compatible with the Bottle Caps, the same interchangeable capsule system used with Blue’s Bottle mic, you can add an array of tonal characteristics and pickup patterns on the fly. It’s like having an entire mic cabinet in one mic! It comes with Blue’s versatile B8 capsule as well as a custom shockmount and wood storage box. The Stage One is every bit as versatile as its tube-based sibling, excelling on a wide variety of sound sources. The Stage Two BottleRocket is a transformerless tube microphone with a warmth and character all its own. Like the Stage One, the Stage Two is also fully compatible with the Bottle Caps, adding incredible array of tonal choices to compliment its highly desired tube microphone warmth. Stage Two comes with Blue’s versatile B8 capsule as well as a custom shockmount, high-definition 5-conductor tube mic cable, Blue’s Powerstream power supply and an ATA-style flight case. Great for recording vocals, electric guitars, acoustic guitars, strings, drums, woodwinds, and more! The BottleRockets are available for $899 MSRP (Stage One) and $1999 MSRP (Stage Two). www.bluemic.com. 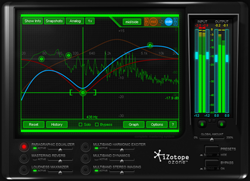 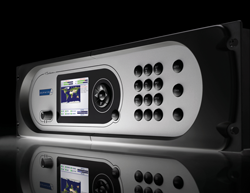 ► Jeffrey Hedquist is offering a workshop called “Recession Busters: Tap your creative assets to drive new business and earn big renewals.” You’ll hear the actual audio samples from major advertising success stories, and learn ways to get your clients to continue to advertise, how to identify your most likely prospects now, and better client follow-up techniques at the Radio Advertising Bureau (RAB) national convention in Orlando from 12:00 noon until 1:15 p.m. on Monday, March 16, 2008. Hedquist says, ”The economy is soft. Times are tough. Participants will leave the workshop with solutions. I’ll demonstrate ways we can be true marketing partners for our clients, the biggest opportunity our clients are missing, 5 ways to get our clients to continue to advertise, Identifying our most likely prospects now, generating better client input for commercials and creative techniques that work best during challenging times.Hedquist, President and Creative Director of Hedquist Productions, Inc. is a copywriting expert and producer who has won over 700 International, National and Regional advertising awards. He has conducted hundreds of seminars for broadcast associations, owner groups and individual stations throughout the country.  His teleseminars, one-on-one coaching and monthly articles have been used by radio salespeople, producers and clients. For more information, contact Jay Mattsson, Director of Casting and Client Services at Hedquist Productions, Inc., (Tel.) 641-472-6708 or email jay@hedquist.com. For more information on the Radio Advertising Bureau, go to www.rab.com/public/about/about.cfm.

► Spacial Audio Offers Radio Industry Veterans a Bailout: The first 5 of 50 Spacial Radio Bailouts are Awarded. Spacial Audio donates software and stream hosting to move 5 recently-unemployed radio veterans online. The Spacial Radio Bailout offers the following, free, to each of the persons listed below: 1) SAM Broadcaster v4, a leading radio automation system in the global market 2) StreamAds, Spacial software allowing ad insertion and accountability for digital transmission 3) Hosting of a 500 seat audio stream at 128 kb/s, for up to five years. The latest Spacial Radio Bailout recipients are: Jason Russell, Adam Schneider, Larry Elliott, Frank Arena, and Aaron Philliops. “Looking at all the talent being laid off,” says Spacial Audio CEO, Bryan Payne, “we know Spacial can help by giving radio veterans the chance to create great radio, online. This is a solid investment in the future of an industry we all love.”  Every Tuesday for ten consecutive weeks through April 7, Spacial Audio will randomly select 5 recently-fired radio industry veterans and give them the software and hosting support to produce their own online radio stations. Weekly results will be published at select radio industry publications, SpacialAudio.com, and SpacialNet.com. Registering is easy and open to any radio professionals who have been released from employment over the past six months through no fault of their own. Spacial Audio is determined to jumpstart the radio industry with quality content from radio veterans. The transition from a broadcast world to the internet is easily made when you have the right tools. With this package, 50 former radio employees will be given those needed tools to create great radio on the internet. The total value of this Spacial Radio Bailout is $3.7 million, with each recipient able to acquire up to $75,000 of services and software - free! Spacial Audio Solutions, LLC is a developer of audio software and technology since 1998, Spacial Audio Solutions, LLC has products and services used by over 12,000 global customers. As a broadcast automation and ad insertion software company, Austin-based Spacial Audio Solutions, LLC has flown under the radar for years while providing backbone broadcasting technologies used by a number of easily-recognized brand names. www@spacialaudio.com. ▲

January 01, 2011 6230
by Steve Cunningham Users of Nuendo 4 have waited nearly three years for the new release of Steinberg’s flagship multitrack audio editing product; this column hasn’t looked at Nuendo since version 3 back in 2005 and believe me,...
Read More...
© 1988 - 2023 Radio And Production, LLC
Go to Top