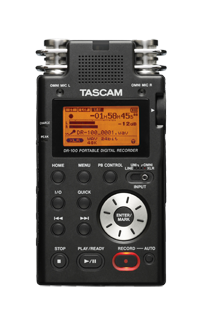 ► Tascam’s DR-100 Portable Recorder targets recordists who need a reliable handheld recorder with advanced recording features. Building on the DR-1 recorder, the DR-100 has a pair of XLR mic ins with phantom power for adding pro condenser microphones. In addition, the DR-100 has four built-in electret condenser mics – two cardioid and two omni – and a built-in speaker for playback. It’s powered either through an included Lithium-Ion rechargeable battery or easy-to-find AA batteries. Analog line inputs and outputs are also available, as well as a mic stand mounting hole for recording flexibility. Other production-savvy features of the DR-100 include a wireless remote control and audio editing features. Playback can be looped or slowed down without changing the pitch, and locate points can be added while recording. The DR-100 records to SD or SDHC cards, and a 2GB card is included with the unit. Tascam also announces new software version 1.10 for the Tascam X-48. The update adds several user-requested features to the 48-track digital audio workstation. Among the new features are a new “Big Meter Mode,” which changes the VGA display into a meter bridge for live recording and tracking. Other added features include a new “fail safe recording” mode which saves the file every 5 seconds. Tascam also made improvements to the user interface, automation system and minor bug fixes. X-48 version 1.10 is now available for free download from the Tascam website. www.tascam.com. 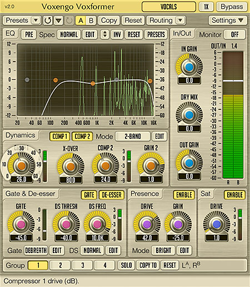 ► Voxengo announced the release of version 2 of Voxformer vocal processing plug-in. Voxformer is a multi-functional vocal channel strip plug-in for professional audio applications. Combining several professional quality processing modules, Voxformer was designed to be a comprehensive solution for all your vocal processing needs – be it spoken or sung vocals. Version 2 features the following improvements over version 1: Smoother compression, de-breath gate algorithm, multi-channel support, multi-platform support, wet/dry mix, mid/side processing, processing mode editors, selectable oversampling level, undo/redo and more. The coolest feature of Voxformer is its one-knob vocal compressor.  Using only a single knob, you can get a tight, open and definitive professional vocal sound with an excellent articulation in no time. You do not have to worry about common ratio and make-up gain controls since they are automatically selected by the advanced compression algorithm while attack and release parameters are stored in a mode preset. Moreover, Voxformer features two compressors of this type, allowing you to apply either a two-band or a two-stage (serial) vocal compression. Voxformer also features the de-esser with selectable center frequency and threshold. Multi-band noise gate is available, which, in a manner similar to the compressor, was designed to bring ease of tuning while providing excellent sonic results. For those who like a saturated vocal sound, Voxformer implements a special module which applies a smooth saturation. Another useful feature Voxformer has to offer is the presence boosting module, which you can use to add some shine and space to the vocals. Almost all Voxformer’s processing modules offer “mode editor” panels where you can fine-tune specific module’s operation. In most cases this allows you to use Voxformer for processing of a wide range of instruments beside vocals.

► British DSP manufacturer XTA Electronics has announced the latest addition to their successful 4 Series – the DP426. The DP426 is a 2-in, 6-out audio management tool that has been introduced following the demise of the popular DP226 and is ideally suited to stereo three-way applications. The DP426 shares exactly the same features as all the other models in the 4 Series including, 28 band graphic EQ and 8 bands of fully parametric EQ on the inputs, 9 bands of fully parametric EQ on the outputs, crossover filters, which offer various slopes from 6dB/Octave to 48dB/Octave, delay, limiting and Audiocore remote control. www.xta.co.uk.

► Voxengo now offers a custom drum track recording service. With its help musicians and producers can order custom drum tracks for their songs. The drum track will be played by an experienced drummer and recorded in Voxengo’s recording studio.  “…nothing in computer world can replace a real human drummer feel. Secondly, a realistic drum sound cannot be reproduced by a drum sampler since a drum set sounds as a single complex acoustical instrument: this makes it impossible to recreate such sound by means of discrete sampled drum hits. Thirdly, organizing drum recording on your own is usually expensive. We are doing all this in our service, but since the process is streamlined the cost can be kept reasonably low. Beside that we produce a finalized stereo drum mix which can be used instantly, with or without additional processing (e.g. equalizing, multi-band dynamics); individual drum tracks are also provided. Custom drum tracks are produced in 5 days for USD 109.95 per song. www.voxengo.com/drumservice/. ►

► Blastwave FX, the HD sound effects label, has announced the release of Free Sound Effects Download Pack #1, available on www.blastwavefx.com. The Free Sound Effects Download Pack #1 contains 68 favorite sound effects selections from 40 Blastwave FX libraries. Sonic novelties include angry goat bleating, bursting fireballs, robot footsteps, a pixie dust fly-by, digital glitch, low frequency tremors and more. The 68 sound effects included Free Download Pack are available for all to use on a royalty-free basis via a Creative Commons License and contain 68 selections from the 40 Blastwave FX collections produced to date, including SONOPEDIA™, Blastwave Imaging Elements, Radio Meltdown, Pop, Buzzsaw, LFE and more. ”After years of producing sound effects libraries for companies such as Apple, Sony, Adobe, Hollywood Edge and Sound Ideas, we decided it was time to do our own thing,” said Ric Viers of Blastwave FX. “We have released the Free Download Pack as a way to introduce Blastwave FX and give people sound effects they can check out and use for free. Blastwave FX was born in January 2007 and since then we have produced over 33,000 sound effects organized into 40 royalty-free collections, including our flagship library SONOPEDIA.” Blastwave FX also announced the release of 20 sound effects libraries on USB Flash Drive. The libraries currently available on USB Flash Drive include: Ambience I, Animals I, Cartoon I, Emergency I, Fire I , Foley I, Horror I, Household I, Humans I, Impact I, Industry I, Musical I, Office I, Science Fiction I, Sports I, Technology I, Transportation I, Warfare I, Water I, and Weather I. Each library is delivered on a 2 GB, 4 GB, 8 GB or 16 GB USB Flash Drive depending on the format selected. Available formats include 16/44.1, 24/28, and 24/96 broadcast .wav files. Blastwave FX libraries delivered on USB Flash Drives feature: • USB 2.0 (56mm x 16mm x 9mm) • MAC/PC compatibility • 100% HD Sound Effects (24/96 native recorded) • Embedded Metadata for Search • Royalty-Free. www.blastwavefx.com.