As anyone who’s been around the audio business for more than twenty minutes knows, Mackie has been making some very cool small mixers for a very long time. After all, the original Mackie 1604 is the stuff of legends. The company’s Onyx series of mixers has recently distinguished itself by including a FireWire audio interface on every model, allowing the analog boards to be connected directly to a computer. These particular mixers, referred to as the Onyx-i series, include models with up to 16 input channels and four busses.

This month will look at the latest in the Onyx series: the 820i. This is a terminally cute eight input analog mixer which provides a generous list of features in a form designed to take up minimum real estate on your desktop. However, there’s an added twist to this little mixer’s story, one which particularly piqued my interest. The Mackie 820i mixer is now ProTools compatible, as are its larger siblings.

While these boards have been compatible with other PC and Mac audio editing software for awhile, courtesy of ASIO and Core Audio drivers, the fact that they’re now ProTools M-Powered compatible has surprised a lot of people (possibly including Digidesign itself). At the time of this writing, I’ve not been able to discover whether Mackie was given the necessary driver code by Digidesign, or if they just whumped up their own driver. Either way, it would appear to be a win-win for the end-user. 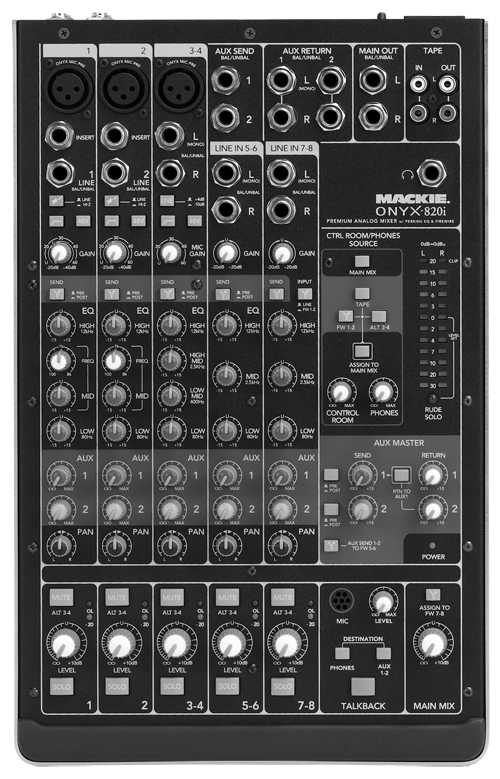 The Onyx 820i is first and foremost an eight-channel in, stereo out analog mixer, equipped with both mono mic/line channels and stereo line-in channels. The attractive aluminum chassis seems sturdy enough and the little board feels quite substantial, no doubt in part due to Mackie’s use of an internal power supply instead of the customary wall wart one might expect on a mixer of this size. A set of serious rubber feet on the underside of the case, along with the nearly 10 pound heft of the mixer, helped keep it firmly planted in place on my desktop.

The plastic knobs will feel familiar to anyone who has used a Mackie before -- a light touch and just a little wiggle, but smooth nevertheless.

All the input connectors are on the top surface of the board, while the output connectors, FireWire connectors, and AC connector with power switch are located on the back panel. A rackmount kit is available separately as an option.

Channels one and two are mono and include XLR mic inputs, 1/4” line inputs that accept either balanced or unbalanced signals, and an insert on each. Channel 3/4 can function as either a mono mic channel or a stereo line-in channel. Channels 5/6 and 7/8 are stereo line in only and are identical, except for the fact that you can assign the stereo FireWire outputs from your computer directly to Channel 7/8 using a button next to the EQ for 7/8.

All input channels come with trim controls. For the inputs with mic preamps, these range from -20 dB to +40 dB, more than enough gain for all but perhaps a ribbon microphones. The two line only inputs feature a total of 40 dB of gain, arranged as 20 dB of cut and 20 dB of boost. The three mic channels also have individual 48 V phantom power buttons, important if you want to use both ribbon microphones and condenser microphones at the same time. These three channels also have low-cut filter buttons, each of which engages a high pass filter at 75 Hz within 18 dB per octave slope. Input selector buttons on channels one and two are used to activate a high impedance option for guitars, while the input selector button on channels 3/4 selects between +4 dB and -10 dB input levels.

Next in line is the EQ section which features Mackie’s “Perkins EQ.” Named after the Mackie engineer who developed the circuitry, Mackie claims that this design was inspired by “British” equalizers and trades boost/cut capabilities for an extra 6 dB of control, giving 15 dB of boost and cut. I don’t know about all that, but the EQ does sound good. The two mono channels feature a three band EQ with a sweepable midrange from 100 Hz to 8 kHz. Channel 3/4 gets the standard Mackie eight bus EQ, with four fixed bands at 12 kHz, 2.5 kHz, 400 Hz, and 80 Hz. Channels 5/6 and 7/8 get three bands of fixed EQ, forgoing the 400 Hz band.

At the top of each EQ section is a handy button labeled Send. This is a thoughtful feature that allows you to send your audio from the Onyx into your computer either pre- or post-EQ. In the pre-EQ position, all of the EQ circuitry is removed from the signal path entirely. As nice as it is to have analog EQ (and a Perkins EQ at that), it is good to be able to remove it when you feel like it.

Each channel also features two AUX sends, which can be set to pre- or post-fader via switches in the Master section. However, the switches control all sends simultaneously. Finally, each channel has a pan pot, a solo button and a mute button, and level control on a knob. With this size mixer, one does not expect to get proper faders.

Nor does one expect to get extensive metering capabilities. On the Onyx 820i, a green LED near the level knob begins to flicker when the input signal (which is tapped after the trim control) exceeds -20 dB. A red “OL” LED (which taps the signal post EQ) indicates signal overload. These two LEDs have been stock on Mackie consoles going all the way back to the 1604, and while some may find them insufficient, I’m used to ‘em and they work for me.

July 01, 2010 5303
by Steve Cunningham With the economy still in the intensive care unit, there’s little in the way of disposable income available for most of us to update and refresh our rigs. But the fact is that there are more good sounding...
Read More...
© 1988 - 2022 Radio And Production, LLC
Go to Top