I continue to be amazed at the number of inexpensive condenser microphones on the market. In the mid-1990s you had to spend big bucks to get a good-sounding large diaphragm condenser for voiceover work, as prices for a quality condenser started at $1200 and went up sharply from there. Many of us ended up with dynamics like the RE-20 and -27 to get a big, detailed sound. I’m not knocking dynamics mind you, but the fact is, there’s no way for a dynamic microphone to reproduce transients and high frequencies as well as can a condenser. The combined mass of a dynamic’s mylar diaphragm and attached voice coil just can’t move as quickly as can the 3 mil diaphragm in a condenser.

That’s just the raw physics of the thing.

The fact is that today there is a dizzying array of condenser microphones priced under $300, many of which are great for voice work.

At the recent NAMM Show in Anaheim, I happened to spend a few moments at the AKG booth where I noticed that they’d upgraded their entire Perception line of condenser microphones. According to the company, these mics are designed and engineered in Vienna, and built in China under close supervision and subject to rigorous quality control. I’m a fan of AKG microphones in general, so I had them send me one each of the three large diaphragm condensers in the Perception series. Let’s take a look at a trio from AKG. Do I need to mention that they all require 48V phantom power? I thought not... 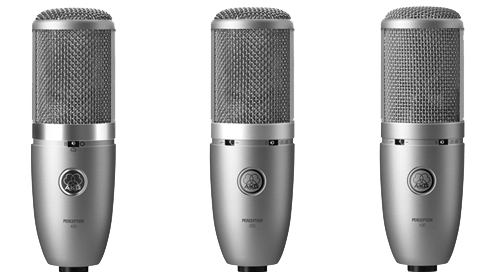 I’ve said this before and I’ll say it again -- buying a microphone is a lot like buying new underwear. It’s a very personal decision, and while I’m happy to provide some guidance here, this is not a decision you want to make on the basis of this or any other article you’ve read recently. When considering a microphone, borrow one, rent one, or whatever else you have to do to get one you can try out, preferably in your studio with your audio chain.

If all else fails, find a dealer with a reasonably quiet listening room and audition them in that environment. What you don’t want is to try to evaluate your voice on a microphone while some knucklehead is wailing out “Smoke On the Water” in the background. If you’re considering among multiple candidates, try to set them all up once so that you can perform a reasonable A/B comparison in real time.

Remember that our memory for sound, especially in terms of frequency response and overall quality, is fleeting.

It’s also important to note that while the quality of Chinese made microphones has improved markedly over the years, as evidenced by these AKG offerings, the old maxim of “you get what you pay for” still applies. Few pro-engineers will mistake these microphones for a true German built AKG or Neumann. So as good as these mics are, please keep in mind that if you want the real sound of a Neumann, you’re going to have to pay for a Neumann.

While these mics represent excellent value for the money, it’s still true that you get what you pay for. Many of these microphones are manufactured in China, and while they may claim to use the same capsule design as a German mic costing ten times as much, few pro engineers will mistake them for the real thing. A couple of models are also inconsistent from unit to unit, so it pays to audition more than one of them. Now, none of this implies that we’re comparing apples and oranges, because these mics are surprisingly good. But if you want the sound of a Neumann, you’re gonna have to pay for a Neumann.