I Zune, You Zune, Everybody Zune Zune 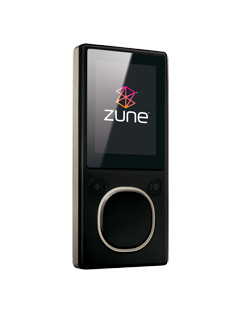 I have joined the enemy. I own an MP3 player.

I bought an 8G Microsoft® Zune™ in July and I love it. Mike and Mike in the Morning don’t love me so much anymore. Why, because I’m listening to the MLB Gameday Replay podcast on my way into work instead of the ESPN Radio morning show on our Sports Talk station. It’s not because Mike and Mike aren’t putting on a good show, just the opposite. They’re very entertaining. They have interesting guests. It’s a tightly produced show. It’s just, they also talk about… football! Yeah. They talk about football, and basketball, and tennis and other sports when it’s baseball season. Between the beginning of April and the end of October, I couldn’t care less about any sport other than baseball. I don’t want to have to wait for an interview with Peter Gammons or Buster Olney because Greenie and Golic are talking about the NFL draft or the latest in the Brett Favre soap opera. I wanna know how the Tampa Bay Rays are on their way to the best season in the team’s history. I wanna hear about the National League Central race between my Cubs and those damned Brewers. Well, with my Zune, I can.

Why do you think Apple® called their MP3 player an I-pod and not an Us-pod? Pobcasting allows people to become their own Program Directors. With my own portable media player, I control what I listen to. So instead of waiting for Mike and Mike to stop talking about football, I subscribed to the MLB podcast and the software automatically downloads it and syncs it with my Zune. So after I drop the kids off at school, I turn it on and I am up to date with the goings on in the Majors the day and night before. It doesn’t matter to me that the podcast is even well produced. It isn’t. It uses badly mixed music and sound effects, poorly mixed mics and awful internet-quality snippets of game broadcasts. One podcast even used the audio from the television broadcast which sounded like they held a microphone in front of the TV speaker. On top of that the announcers are only slightly better than Mr. “Boom Goes The Dynamite”, but none of that matters, not one little bit. All that matters to me is… content. I am listening to what interests me.

My boss also owns a Zune, a 30 gig model. He is an avid listener to podcasts and audio books. He’s mentioned to me how much the audio quality is suspect on most of the podcast to which he listens. Yet he continues to listen because of the… you guessed it… content.

So what does that mean to radio people like us? For music programmers, it means jocks better be bringing their “A” game every time a microphone is opened. It means they better be sure that next song is a good one followed by the next one and the next one and the next one. For radio talkers, it means their content had better be interesting every time, that callers are screened very carefully and only the good ones make the air. For sellers, it means they better stop bending over their desks to clients by allowing them to put crap on the air in the form of ignorable commercials. For producers, it means we must continue to educate ourselves about what is interesting and relatable to listeners so that our clients can continue to sell.

Are podcasts going to kill radio? Hell no. The only thing that can kill radio is radio, by not adapting to the competition and staying relevant to the listener. When TV came along, radio adapted by changing their programming from produced dramas and comedies to disc jockeys and music formats. When FM rose to dominance, AM adapted by switching to talk formats. With satellite radio, well, the jury is still out. I also own an XM radio. I bought it so I could listen to ballgames. Turns out I listen to more ballgames online than I do on XM so I cancelled my subscription. Also, I found the content to be diluted. I love Blues music and when I listened to the Blues channel, I only heard 5 out of a hundred songs I liked. Would you listen to a CD if you hated 95% of what you heard? Nah. Didn’t think so. My guess is satellite will always be a niche media.

What radio can do is join the club, but with one major exception. Only do it if you can make money. My MLB podcast is free and the sound quality reflects it. Rush Limbaugh posts his entire show online, but to get it, you must pay a subscription fee, and considering the size of his latest contract deal, it also must be doing pretty well. I am also told the sound quality is choice. If your station is posting clips of your morning show on your station’s website but doesn’t want to charge a subscription fee, make sure you insert a podcast-only commercial at the beginning of every clip. You can then track your downloads and show your clients hard data of how many times their commercials are being heard. The important thing is to keep the content as good as you can make it. And while you’re at it, keep the audio quality as good as your webhost will allow. If you have the bandwidth, use it. Bump the bit rate up to 256Kps at 44.1Hz. Your listeners may never say it matters but they’ll notice it.

This is the second article I’ve written this year regarding MP3 players and content. If it seems like I’m being redundant, I beg your forgiveness. I sat in a meeting once where the speaker related that a radio station’s competition is not other radio stations, but TV, billboards, and print. Add now, the internet and personal media players. Audiences for broadcast TV news are slipping. Newspaper subscriptions, ad sales, and stock values are plummeting. But radio is hanging in there, and we’ll continue to hang in there only as long as we stay adaptable and relatable.

I must go. There’s a Cub game on the radio and I must join the broadcast… already in progress. “Hey! Chicago, whattaya say? The Cubs are gonna win to-day!”