To USB or Not To USB

When it comes to Folks Like Us, the microphone is as personal a possession as a decent set of near-fields, a good rib rub recipe, and realizing you have a keeper at home when she packs a bit of her lingerie in your lunch bag along with a bologna and mustard-on-white sandwich and a Moon Pie.

Now, a new player is making inroads... the USB microphone. Rather than needing a separate pre-amp, these microphones are self-contained, including the analog-to-digital converter that allows you to plug them right into the USB port on your computer. One mic, one cable — it’s certainly a simple setup.

But, given the prices of these microphones, are they any good? Some decent manufacturers have USB microphones in the catalog. Who uses them in studio, and/or on the road? I’m not out to write the definitive white paper here, I simply got curious and am sharing what I found.

I fired off a note to my producers circle and asked them their thoughts on USB microphones. These fifty or so folk represent a cross section of highly experienced veterans and relative newcomers, independents, radio station producers – the whole melting pot. I knew it would be a passionate issue.

The overwhelming consensus was this: no professional voice talent would use a USB microphone... yet. Even on a budget, a conventional microphone, and A/D converter plugging into a PCMCIA or USB port is more desirable than the output of a microphone with the A/D and USB built in. 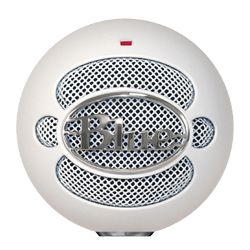 But the tide seems to be slowly coming in for routine, non-mission-critical usage and applications where the client is happy with the audio. There are a few folks that use them almost exclusively and are happy with the sound. And, even I agree that for “podcasts” and similar low-quality applications, a USB microphone would likely be a handy item in the equipment inventory.

Voice talent Bob Brewster takes his studio microphone with him on the road, along with a mini-mixer for the phantom power and pre-amp, and an external sound card for his laptop.

Talent and producer Chris Ritchie doesn’t use a USB mic in studio or on the road. He replied, “...I have found that the A/D converters make a world of difference in the quality of the recording. The preamp can make a bad mic sound better or a great mic sound bad. The signal is only as good as its weakest link. Although equipment price isn’t always an indicator of quality, often thousands of dollars get spent on a mic and preamp alone. One must assume that if the mic itself contains the converter and preamp it may not measure up. My choice would be to buy a good preamp and A/D converter with USB output, then select a solid microphone.

Industry veteran Peter Maus has a microphone in the studio for almost any local or live situation. He commented, “What I’ve heard have been OK, but at high sound pressure levels, they lose their grace. Pretty ratty under less than optimum conditions. For field recordings, I use any of my shotgun, or stereo handheld mics, directly into a compact flash recorder. But as far as USB mics, I’ve not seen anything that makes me get out the cash. Not yet, anyway.”

Voiceover talent Kevin Genus said,” My agent would castrate me if he found out I was using a USB mic. Everything we submit for auditions has to be ready to go to final and the USB mics have too much [signal to noise] leakage. Not much, but enough that engineers I send audio to could hear it, and they advised everyone against sending anything to them like this. Of course these guys are sitting in million dollar studios in LA, too. If you don’t have to worry about that critical of a sound, then it may be moot.”

College professor Gary Connolly loves his dynamic, and condenser USB mics. He replied, “If it’s for phone, internet, or other outlets where it gets compressed and converted to such an extent, I don’t think it matters. Actually I’ve used a couple of the USB microphones and they give comparable quality as my main studio microphone. I recommend the USB mics highly to all of my students. It’s a cheap, easy way for them to get started, and most of their voice work, when they are starting out, stays on the net and gets put down to 128 or 64 MP3’s anyway. I would venture to say in those situations, you can’t tell the difference in an expensive mic and the USB mic.”

Operations manager Justin Kaiser picked up a dynamic USB mic “last minute on a trip out of town. It paid for itself double on the first gig. However, it is not as crisp as I’d like it.”

Production ninja Jeff Bolt said, “I am messing with one right now. It is dead quiet and picks up your voice only, no background noise. No line noise. Very clean. Not as warm as a high end mic, but will work beautifully with my laptop. And at the price, I’m considering it.”

Our Down Under university prof Jason Myatt purchased a USB microphone that, like some, uses a capsule from the manufacturer’s conventional microphone. “The capsule is good, but the A/D converters in this mic are a little lacking when it comes to the professional voice artist. Setup is automatic, the input gain is quite low, there’s a small amount of noise that can’t be avoided. Basically, a great mic for an emergency voice over... but that’s it! It will not stack up against your studio mic.”

Voice talent Rey Anthony brought up a very good point — one that I also experienced — the necessity to download a patch or application to get the full signal out of the microphone. “I bought one a while back. I wasn’t happy. I had to download a mini-app from their website to boost the audio level to something acceptable. There may be a new version of the software that resolves some issues, but it’s is gathering dust in the closet.”

Road warrior Joey Pepin adds, “Take it from a traveling V/O guy, I have two matching (non-USB) mics and two preamp-A/D converters. One setup I always keep in my laptop backpack along with a small stand. They’re lightweight, portable and are mic preamps as well. I can hook up my mic and voice in the car if I need to. I have even bummed a studio using my own gear, just needing the ‘booth’ for sound quality.” 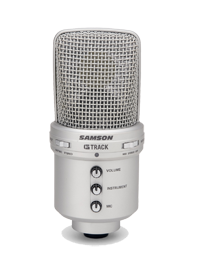 Independent producer Tonya Laderer echoed a similar thought, “I now only use my USB mic for travel. I bought a studio microphone [when] I discovered the USB microphone sometimes has really strange ‘skips’. So for the long narratives I voice, it is annoying. Though I used [the USB mic] exclusively for four months for hundred of reads without one complaint from fellow producers, I found it not as reliable for large jobs.”

In every group are the rabid enthusiasts. Producer Johnny Johnson was the pom-pom shaking cheering squad for USB’s in our producers group. Johnny wrote, “I use my USB and I love it...its fantastic! I don’t care what anyone says, my USB is by far the best mic I’ve ever used, it grabs my voice with the right sound and spits it out crisp and clear. I’ve had two agencies ask me what I’m using and be stunned when I tell them it’s a USB mic. So there!”

Canadian producer Albert Berkshire shares the “borrow a room” theory. “We never refused any traveling talent thirty minutes to rip some emergencies. In many cases, the talent will offer to voice a couple tags or a short-run spot or two in exchange/trade for a little studio time. It’s an industry courtesy, in my books. And yes, traveling with your own mic is smart. The bottom line is this: at the end of the day, happy clients are all that matter — especially when you have a fetish for food and shelter.”

For road work, a camera case with adjustable foam blocking will safely hold a good studio mic, preamp, A/D box, laptop and supplies. A valuable point mentioned was to use the same microphone at “home” as well as on the road. The different recording environment will be enough of a challenge to tame, without having to deal with different performance characteristics of a different microphone.

Why go through all the “trouble”? Do you think a race team crew chief is going to keep all the good tools at home, and bring the cheap stuff when he’s on the road? Especially for independents, business rarely closes the doors. The competitiveness of the industry these days means you must be available when your client wants you to be – whether you’re at home or away. More than once, a couple of sessions on the road have paid for the very vacation we were on.

Because you’re not home is no reason to not be at your best, and use the gear that helps you sound that way. This is your commodity, your product. Use the microphone that makes you sound your best, and use it wherever you may be. If you use a USB microphone at home, use it on the road. If you use a high end large-diaphragm condenser in the booth, use it in the hotel room.

Microphones are certainly a personal issue. For the most part, independents, and talent working in the upper-strata are conventional microphone users exclusively. Some radio people, podcasters, and smaller market producers are able to make use of the USB microphones, often due to financial pinches, but in the end their clients find the product acceptable.

And that, as it was put above, is the bottom line. Whatever makes the client happy.