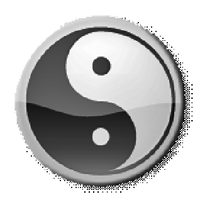 You need to give the same that you receive. It’s the ying and the yang. It’s how you maintain a healthy chi. It’s the positives and negatives of life interacting to create harmony.

This morning, one of our part-timers called up – he’s helping to produce our new morning show. Bright kid with good DJ skills and a great future ahead of him – but as far as production is concerned, there’s just not a track record that I’m aware of.

So he tells me, over the phone at 8am, that the morning show hates a certain sweeper I produced and had a hand in writing. My first, very human thought was “what the f*! You’re a part-timer and you’re telling ME that MY production SUCKS!? What the f* do you know! Don’t you know I’ve been doing this for a heck of a lot longer than you!”

But then my soul interrupted my ego and it told me, loud and clear: “Hey moron – this kid might be a part-timer, but he’s got ears and a brain just like you do. You make noise – he hears noise – listen and learn something!”

So… I did. I removed my ego from the equation, and listened with an open mind. It became so simple. This kid doesn’t want to insult my work – he just wants to GIVE me some honest feedback so the station sounds better!

The producer ended up making a few great points. The writing just wasn’t there - it wasn’t as funny as I perceived it to be when I was chopping it together. The production was just a little off as a result – and ultimately, when that sweeper airs, chances are good that there are more listeners looking to their radio with a blank stare than there are listeners laughing.

So I told my new favorite part-timer to kill the sweeper… and to call me more often to give me more feedback. Look… we’re in a creative industry. Creativity is subjective – everyone’s opinion is different. If someone tells you your sweeper sucks, they’re not trying to insult YOU or your fine work or YOUR creativity. They’re just being honest and trying to GIVE you tools to grow as a producer and build a better radio station.

It was a great, quick “reminder” lesson in the ying and the yang. I don’ t need to just give feedback to the “up and comers;” I still (and always will) need to TAKE feedback so I can give a better product. Guess what: you do too.

The bottom line is this: during the creative process, give honest feedback, and take honest feedback. Once we remove our egos from the equation, it’s amazing how much more open we are to constructive criticism from EVERYONE involved - including part-timers. The result is drastically improved production for a much more enjoyable listener experience.

After all, it’s their ears that you’re aiming to impress.

August 01, 2009 7332
by Steve Cunningham This month brings us a two-fer, consisting of two products I recently installed for a voice actor as part of a home studio refurbishment. This individual already had a suitable notebook PC running Adobe...
Read More...
© 1988 - 2023 Radio And Production, LLC
Go to Top