We last reviewed Magix’s Samplitude software editor three years ago (see RAP May 2005). Since then the program has undergone two significant upgrades, each adding more functions to what was already a strong candidate in the standalone PC editor market. Unfortunately the program still lags in the DAW popularity contest here in the States... it’s remained well under the radar in the press and on the street, which is a pity. Feature-wise, Samplitude kicks several other Windows-only editors in the tuchas, and version 10 adds both new features and a significant UI makeover that deserves more attention than it’s had, so let’s pop the new version DVD in the drive and see what’s up.

Samplitude 10 is a powerful multitrack software editor and mixer. It is offered in three flavors — a two-track Master version (designed for mastering, natch), a 64-track “standard” version, and the Professional version reviewed here, which is capable of 999 tracks.

It supports VST plug-ins, Rewire, and ASIO audio card drivers for low latency, and can handle sampling rates up to 384 kHz, with internal 32-bit floating-point processing for proper support of both 16 and 24- bit resolutions (that means it sounds good and won’t munch your audio). Samplitude is controller-friendly and surround-friendly. It works with everything from the multi-fader Mackie Multitrack controller to the cool little Frontier AlphaTrack controller, and includes effects that will process up to 12 channels of surround.

Finally, it’s object-oriented, which means you can put specific effects and edits on individual audio regions within a track, rather than on the entire track, and they’ll then do their stuff in real time. This may seem a small thing, but it actually may change your workflow for the better if your editor doesn’t do it. 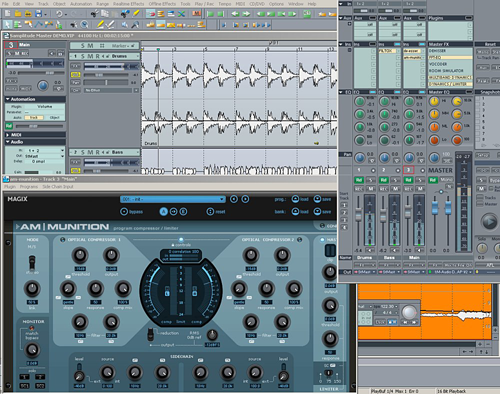 Samplitude runs on Windows 2000 (wow, really? okay), Windows XP, and Windows Vista (in 32-bit mode). You’ll need a Pentium 4 or Athalon running at 2.4 GHz or better, and the program wants to see half a gig of memory for 2000 and XP, and a full gig for Vista 32. However, its multitrack, real time performance doesn’t really kick in until you run it on a 3 GHz Pentium 4 or Dual Core with two gigs of RAM. I evaluated it on 2.0 GHz Intel Dual Core with two gigs of RAM and never saw a hiccup, at least until I had at least a half-a-dozen plugs on each of 18 tracks, when the metering in the lower portion of the screen started to freak a bit.

Installation was completely uneventful, although you gotta love an installation program that plays new age jazz (complete with a female scat track) for you as it loads the initial splash screen. No, really, I’m serious. There’s even a volume control on the screen if you find it annoying (I didn’t, but I couldn’t stop laughing long enough to turn it down).

Samplitude 10 carries forward the product’s previous copy protection scheme using a USB dongle called the Codemeter. You must have this dongle connected in order boot Samplitude. It’s different than most dongles in that it shows up in your My Computer window as a new drive, and you have to un-mount it before you remove it or else Windows will complain. The Samplitude DVD installs a program in the Windows taskbar to allow you to do that easily, but it’s still disconcerting when you forget (not to mention annoying).

In any event, after the installation is complete, Samplitude will try to access the Codemeter dongle and will complain if it’s not installed, prompting you to connect it. Next comes the registration process, whereby you tell Magix the serial number for your dongle, and the website returns an activation code which you then plug in to the appropriate box on the screen. That’s it — it’s quick and relatively painless as these things go.

November 01, 1990 10033
by Jerry Vigil Look out! It's the invasion of the consumer DAT machines! Remember when you perused the catalogue of your favorite equipment distributor and drooled over the many DAT machines to choose from but cringed at the...
Read More...
© 1988 - 2022 Radio And Production, LLC
Go to Top